Thousands 'demonstrate for life’ at wedding of terrorism victim’s daughter

“I think every Jew who has a Jewish heart needs to be here tonight,” said Avner Gilboa, 62, from Kiryat Arba, who knew Yaakov and Netanel Litman. 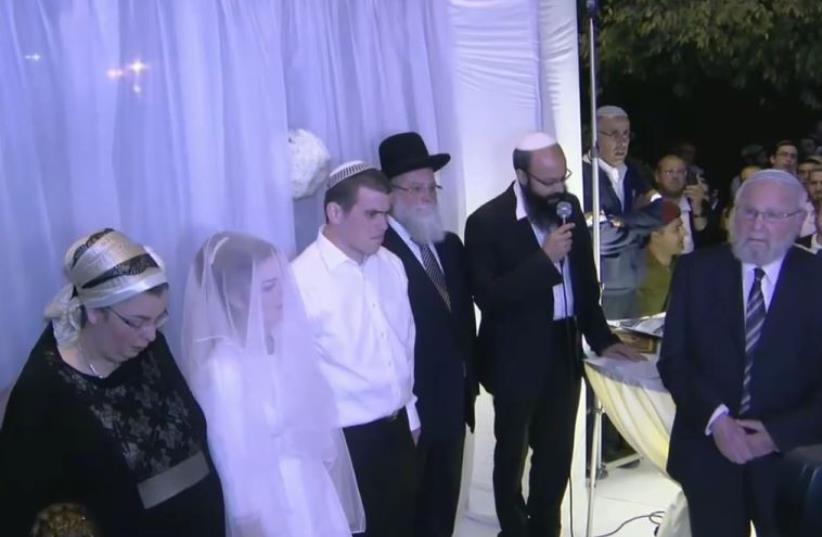 The Litman-Biegel wedding
(photo credit: YOUTUBE)
Advertisement
Thousands of people from all over Israel and abroad danced, rejoiced and celebrated at the wedding of Sarah Tehiya Litman and Ariel Beigel in Jerusalem on Thursday night, two weeks after Sarah’s father and brother were murdered in a terrorist attack near Hebron.The couple invited the general public to come and dance at their wedding shortly after the murders of Sarah’s father, Yaakov, and brother, Netanel, and despite the tragic circumstances the mood at the celebration was jubilant, joyful and defiant.Large numbers of national-religious youth, together with people from the haredi community, Jews from Canada to Australia, Breslov hassidim and many others formed a cross section of Jewish society that game to gladden the bride and groom at their wedding.Three Breslov vans turned up and began pumping out techno- hassidic music from massive speakers on their roofs, while separate circles of men and women danced and celebrated with abandon, singing “Am Yisrael Hai” (the Jewish people lives), waving Israeli flags, and adding to the electric atmosphere.In explaining why they had come to the wedding, many of the celebrants expressed a resolute and uncompromising message that participating in the celebration was a statement that the country and the Jewish people would not be beaten by terrorism.“I think every Jew who has a Jewish heart needs to be here tonight,” said Avner Gilboa, 62, from Kiryat Arba, who knew Yaakov and Netanel Litman.“The message is very simple, and it is directed inward and outward. The main message to the Jewish people is that they should know that we are a strong people, and that it is impossible to break us. For more than 3,000 years they have been trying to break us in different types of ways, and it’s not working for them.“Toward the outside, toward the terrorists and our enemies in Europe and other places, the message is that there is no way to break us. Even with the most cruel and inhuman deeds, you won’t succeed in breaking the spirit of this people, and this people will continue with its mission until we reach our completeness with the building of the Temple.”Lior Rapps, 21, originally from New Jersey but now an Israeli citizen and studying in Yeshivat Hakotel in Jerusalem’s Old City, said that he had just come from a memorial service for Ezra Schwartz, the US citizen who was killed in a terrorist attack earlier this month. He said the large numbers of people at the wedding were testament to the resilience of the Jewish people and the State of Israel.“Look at all these people! There are thousands of people dancing for [Sarah and Ariel] and for all of the Jewish people, and that’s an overwhelming experience,” he said. “Everyone’s dancing, there are lots of different denominations of Jews here, everyone’s cheering and dancing and are bringing happiness to the couple and to the whole of the Jewish people.”And Elena Ritnova, 23, from Washington State and now studying in a religious seminary, said she had come to support the newlyweds and their families, saying that the joyful scenes in the face of a devastating incident were uniquely Israeli.“I didn’t expect them to pull through like this, but it’s a totally Israeli thing to do, to take a tragedy and make it into this bittersweet rejoicing and showing this kind of unity, and that’s why I’m here,” she said.There were also numerous public figures in attendance at the wedding who also wished to express their solidarity with the young couple, including the prime minister’s wife, Sara Netanyahu, Deputy Minister of Defense Eli Ben-Dahan, Chief Rabbi David Lau, IDF Chief Rabbi Rafi Peretz, and Jerusalem Chief Rabbis Aryeh Stern and Shlomo Amar.“This is the happiness of life and that the Jewish people lives, that despite all the difficulties we are experiencing in this wave of terrorism we are not despairing, not giving up, and not falling, but rising up and doing this for the sake of life, and showing here the will to live in the strongest way,” said Stern. “This is a demonstration of life and of the Jewish people in its happiness.”