“Tel Tsaf offers a glimpse into a unique time capsule, with excellent preservation of organic remains and other archaeological findings."

By DANIEL K. EISENBUD
SEPTEMBER 6, 2017 19:24
Prof. Danny Rosenberg, of the Zinman Institute of Archaeology at the University of Haifa, holds the ancient vessel.
(photo credit: UNIVERSITY OF HAIFA)
Advertisement
A unique 7,200-year-old clay vessel recently unearthed in the Jordan Valley by researchers from Israel and Germany may represent the oldest evidence yet of ancient class structure as it relates to food storage rituals in the Near East.The relic was discovered at the Tel Tsaf archeological site during digs overseen by Prof. Danny Rosenberg of the Zinman Institute of Archeology at the University of Haifa, and Dr. Florian Klimscha of the German Archeological Institute in Berlin.According to Rosenberg, the clay vessel provides unprecedented insights into ancient political and socioeconomic class structure among elites during a period that remains somewhat mysterious.“Until now, discussions of the early transition to complex societies in this area have focused mainly on later periods, and on the connection between the development of socioeconomic elites and the ability of certain individuals or families to store large quantities of food – beyond their own needs – for survival,” Rosenberg said on Wednesday.“In this context, the findings at Tel Tsaf provide firsthand evidence of the early connection between food storage on a large scale and the observance of a ritual associated with the successful storage and preservation of agricultural yields.” Located near the Jordan River, the Tel Tsaf site was first documented in the late 1940s.It was subsequently excavated during the late 1970s, and later between 2004 and 2007. 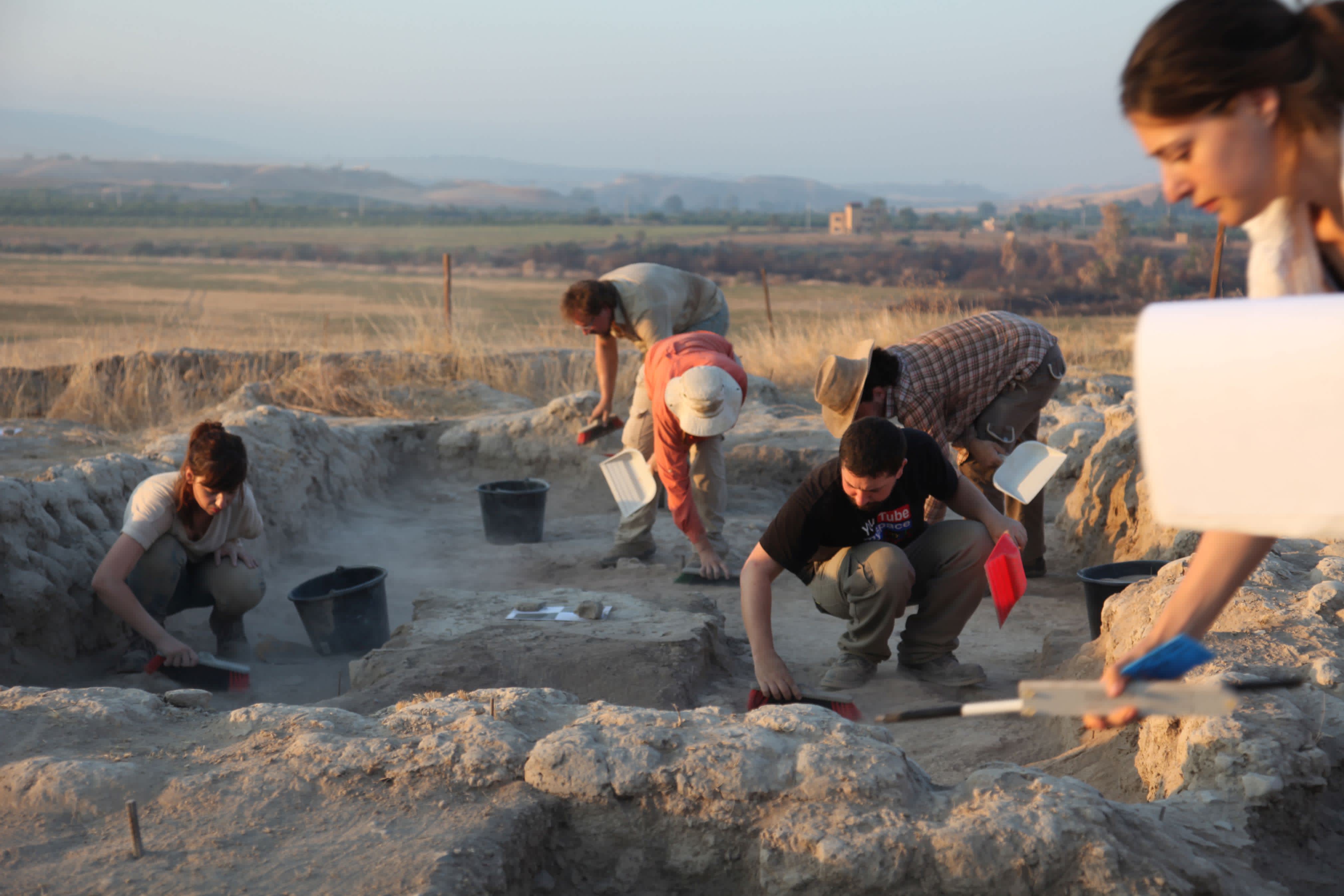 Archeologists working at the Tel Tsaf excavation site near the Jordan River. (Courtesy of University of Haifa)Since 2013, with the assistance of an international team of experts equipped with advanced scientific methodologies, Rosenberg and Klimscha have led a multidisciplinary project at the site, focusing on the area’s ancient economy and environment.The rare findings unearthed at Tel Tsaf include numerous silos found in the courtyards of ancient buildings once used for large-scale grain storage.The silos, the researchers said, are evidence of the storage of food on a scale not previously documented at sites from this period.“The wish and ability to store food certainly constitutes an important step in the transition of humans to societies characterized by more complex social organization,” noted Klimscha. “It also seems that Tel Tsaf’s location, near a major water source such as the Jordan River is no coincidence, considering the site’s potential to accumulate such a large amount of crops.”Rosenberg said that with the exception of the finds at Tel Tsaf, no evidence of mass-food storage between 7,500 and 6,500 years ago has been found in the region.“The significance of storage for development of complex societies is evident by later testimonies from our own region,” he said, “but even more so from Mesopotamia and Egypt, where complex, pre-state and state-level societies emerged and engaged in the intensive storage of food as an essential condition for the development of a social hierarchy.”Researchers have long debated the early emergence of societies characterized by social and economic elites, a phenomenon frequently associated with the Bronze Age, which in the Near East began around 5,300 years ago.However, no evidence has previously been found illustrating that large-scale food storage in earlier societies was accompanied by social or ritual acts intended to ensure the successful storage and distribution of produce.During the excavation season at Tel Tsaf two years ago, researchers found numerous pottery shards in a room situated in the center of a cluster of silos and cooking installations.The fragments appeared to belong to a single vessel. After painstaking work, they managed to reassemble the pieces, and were surprised to find a unique miniature vessel with a height of around 20 centimeters and a small, window-like aperture on its side.“All the pottery vessels we are familiar with from this period have an opening on the top, facing up, just like most pots and cups in any modern kitchen,” Rosenberg explained. “But this vessel is dome shaped, closed on the top, and covered with red-painted clay balls, whose significance is unclear to us.”The researchers said they believe that the vessel is actually a model of the silos.“This vessel is not ‘functional,’ and was found in a building that was used for intensive storage, on the floor in a room surrounded by numerous silos similar to those we are familiar with from archeological and ethnographic records from various parts of the world,” said Klimscha.“We can hypothesize that this vessel was associated in some way with the silos, and particularly with the act of storage,” she continued. “From later evidence, we know that humans created vessels symbolizing larger storage structures; and, indeed, pottery vessels similar to this one – though larger – appear a few centuries later in [this] region, used for secondary burial.”Rosenberg and Klimscha said the size and characteristics of the vessel – together with the archeological context in which it was found – reinforce their contention that it symbolized the silos and was probably used in a ritual setting, possibly as part of the ceremonies that preceded the placement of grains of wheat and barley in the silos, or their removal from storage.The correlation between the growth of food storage capacity and the human cycle of life and death is well known to researchers from various sources, including later findings from the ancient Near East.“Tel Tsaf offers a glimpse into a unique time capsule, with excellent preservation of organic remains and other archeological findings that reflect a thriving community practicing long-distance trade,” said Rosenberg.“Putting together all these findings, the picture reveals an increasingly strong connection between ritual and intense food storage and consumption,” he added.“We believe that the economic prosperity reflected by the astonishing findings from Tel Tsaf was accompanied by notable changes in the way the community of Tel Tsaf organized itself, and by rituals and ceremonies that were practiced in order to ensure that this prosperity will last.”The miniature silo may be the best example yet of the connection between the desire to store large amounts of agricultural crops to gain social and economic advantage, and rituals intended to sustain and ensure economic prosperity, Rosenberg and Klimscha said.