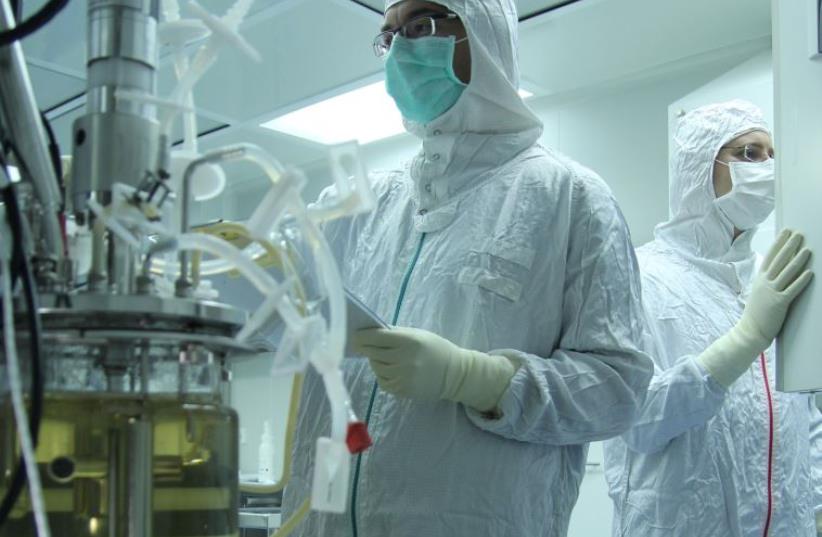 Photos showing Pluristem CEO and COO Yaky Yanai, and Pluristem trials
(photo credit: Courtesy)
Advertisement
An Israeli biotech company has developed an anti-radiation therapy that the US government will likely begin stocking next year, and which is able to cure nearly all patients exposed to nonconventional radiological incidents such as “dirty” bombs, or attacks on nuclear power plants.Pluristem Theraputecs, based in Haifa, has developed a placenta- based cell therapy, which involves injecting patients who have been exposed to lethal doses of radiation.Clinical trials have so far yielded a near 100 percent recovery rate for animals exposed to radiation, Yaky Yanay, president and chief operating officer of Pluristem, told The Jerusalem Post on Sunday.Last week, the US’s National Institute of Allergy and Infectious Diseases, part of the US National Institutes of Health, initiated studies of large animals to evaluate dosing. The trials are part of the US’s Department of Homeland Security program to protect people in cases of catastrophes involving radiation.“The whole free world is dealing with unusual challenges,” Yanay said.Defining lethal radiation as an amount that kills at least 70% of the population exposed, Yanay said that within 48 hours of someone receiving the company’s placenta cell injections, bone marrow blood cell production levels returned to normal, and animals fully recovered from the high radiation exposure.Initial experiments were conducted at Hadassah-University Medical Center in Jerusalem, and produced results that Yanay described as “phenomenal.”The US asked the company to join its National Institute of Allergy and Infectious Diseases program designed to protect large numbers of people from catastrophic incidents, including nuclear terrorist attacks, attacks on nuclear reactors, or accidents in nuclear power plants.“We saw that injecting the placenta cells enabled nearly 100% of the population to recover, compared to 30% of the [animal] group that did not receive the injections,” he said.The US Food and Drug Administration developed an “animal route” for clinical trials, Yanay added.During the trial period, Pluristem agreed to immediately make available an supply of the radiation antidote to the US if needed.The US government is now paying for, and carrying out, trials as it seeks FDA approval for the therapy, which it will likely receive in 2017.“You don’t need DNA matches for patients. It can be injected into the muscle very easily, in all humans or animals,” Yanay said.“As a proud Israeli citizen, I can say that Israel is at the top of our priorities, and we are talking to Israeli authorities.We very much want to provide the level of defense that our people deserve,” he said.