One dead as father says security guard ‘murdered’ his son. 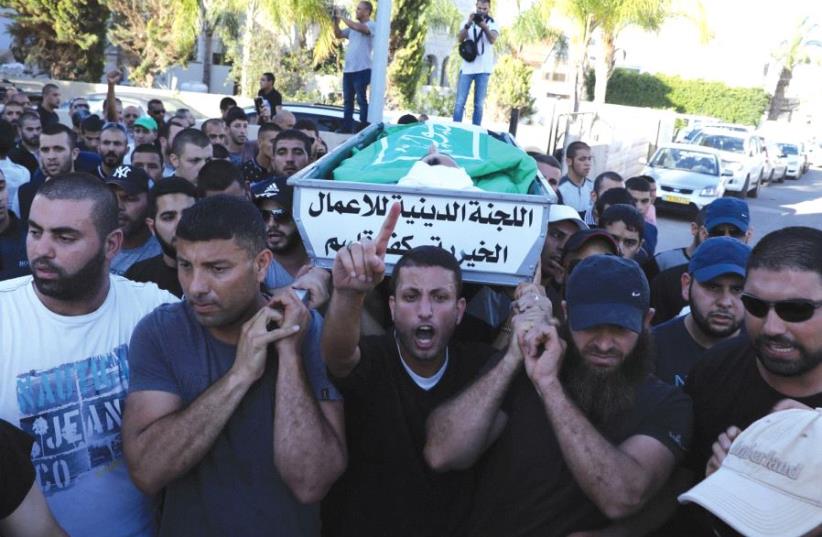 MOURNERS CARRY the body of Muhammad Taha at his funeral in Kafr Kasim, in the Triangle area east of Kfar Saba. Mayor Adel Badir accused police of routinely harassing people in the street.
(photo credit: AMMAR AWAD / REUTERS)
Advertisement
A civilian security guard manning a community policing station in Kafr Kasim opened fire on a group of rioters, killing 20-year-old Muhammad Taha late Monday night, in the Arab-Israeli municipality about 20 km. east of Tel Aviv.The incident sparked a security crackdown on the city of more than 21,000 and brought widespread condemnation of police actions from Arab-Israeli leaders, with the victim’s father accusing the security guard of “murder.”Police said Monday night’s riots erupted after a routine ID check of a local man revealed he was wanted for questioning.Shots were fired by police into the air after dozens of residents attempted to prevent the arrest, the police said. The incident quickly escalated and rioters pelted the police station with stones and set three police cars ablaze.Sometime during the riot, the security guard, fearing for his life, opened fire, killing Taha, according to an initial police investigation.Residents who spoke with Hebrew media disputed that account, stating there was no threat to the guard’s life and that police were harassing the man they sought to arrest.“For months we’ve been asking the police to deal with the organized crime here. But instead of dealing with the crime they come in a brutal way and harass people in the street,” Kafr Kasim Mayor Adel Badir told The Jerusalem Post on Tuesday before heading to a second meeting within 24 hours with Police Commissioner Insp.-Gen. Roni Alsheich.Meanwhile, the High Follow- Up Committee for Arab Citizens of Israel, an Arab-Israeli umbrella organization that coordinates political actions, condemned Israeli law enforcement and political leadership for the death.The committee is planning to stage protests throughout the country on Wednesday and a large demonstration in Kafr Kasim on Saturday.Monday’s clashes were the latest incident in a yearslong acrimonious relationship between Arab Israelis and the police. According to Mossawa – The Advocacy Center For Arab Citizens In Israel, police have killed 48 Arab Israelis since 2000.Resident’s said Monday’s incident was sparked by a spate of eight murders in the past few months and a lack of police action on the issue.Last week two people were killed in the streets.“The [more than a dozen] murders in Kafr Kasim in the two past years were the result of the organized crime and the community has been demanding effective policing services for a very long time. They are fed up,” said Amnon Beeri-Sulitzeanu, co-executive director of the Abraham Fund, an NGO that has been working to improve police relations with the Arab community.“Once the police are perceived as if they are doing a serious job, the community will follow.”Police and other officials readily admit that there is a shortage of forces in Arab-Israeli communities. There are only seven stations for those communities. Yet they say a five-year NIS 2 billion plan to increase law enforcement in Arab localities that began last year is under way. In addition, police were able to double the number of Muslim officers last year to 4% from 2% of the force. Muslims make up 17% of the population.The police also contend that they often face an uncooperative community.Murders go unsolved, they say, because witnesses don’t speak up due to community pressures, and regular policing is met with hostility.It is not a secret that there are too few police stations located in Arab cities, Public Security Minister Gilad Erdan told The Jerusalem Post last month. “But when you see that the Arab population is involved in crimes with two to three times their population and [disproportionate rates of] car accidents, it is not only about law enforcement, it is about culture and other things too.”Following the clashes, Alsheich held a late-night meeting with Arab MKs and the mayor of Kafr Kasim in an effort to quell tensions.But that meeting will only serve as a temporary bandage to the larger problem, said Avi Dawidowicz, former commander of the Israel Police Internal Audit Unit and a lecturer in criminology at Ariel University.“In Israel, the police are managed as a national body, unlike in the United States, where the majority of police under local authorities. This creates a perception that the police are the national government and not part of the community,” Dawidowicz said. “Having the police commissioner sit with the city hall after a conflict will not bring a solution. The solution is putting management of the police under city hall.“The way things are set up, all incidents, even small ones have the potential to explode,” Dawidowicz said.