In a video released by police, the playful marine mammals are seen approaching and swimming around the Israeli vessel. 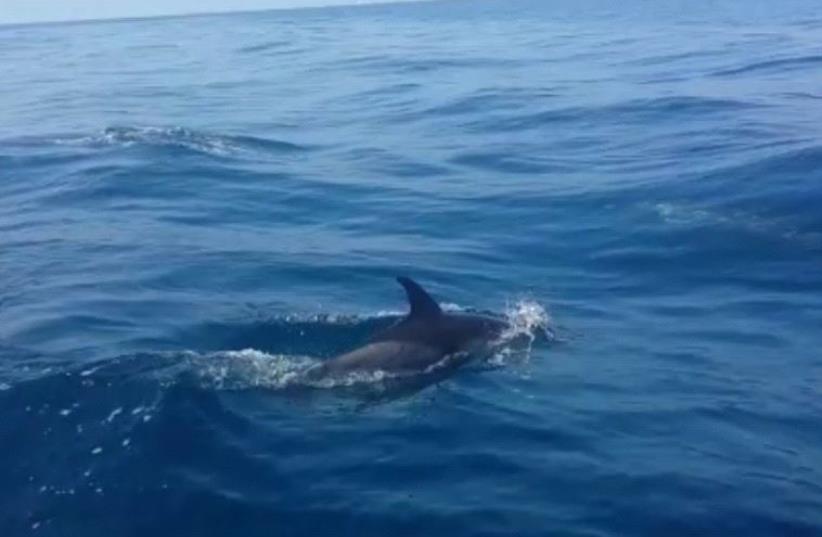 Dolphins swimming near Maritime Border Police patrol ‏
(photo credit: screenshot)
Advertisement
Israeli maritime security authorities seem to have found new partners to escort them on their patrols.A Maritime Border Police unit on patrol in waters off the coast of southern Israel was pleasantly surprised Sunday morning by a group of dolphins that encircled their vessel.
Dolphins swimming near Maritime Border Police patrol
In a video released by police, the playful marine mammals are seen approaching and swimming around the Israeli vessel. In July, a whale was spotted swimming along the nation's Mediterranean coast near Tel Aviv.According to the Israel Marine Mammal Research & Assistance Center, the 10-meter-long whale was first spotted on the morning of July 17 off of Tel Aviv's Gordon Beach. The whale swam northward and eventually swam by a tourist who was surfing at the city's Hilton Beach, about 150 meters off the coast.  At the nearby Mezizim Beach, divers managed to swim out to the whale and even pet him for several minutes, noting that he looked thin. The whale was later spotted 150 meters away from Dado Beach in Haifa.