Women of the Wall to High Court: Implement Kotel deal or create a third section

Implementation has been frozen due to the opposition of the haredi political parties to the plan, a stance which emerged after the resolution was passed by the cabinet in January. 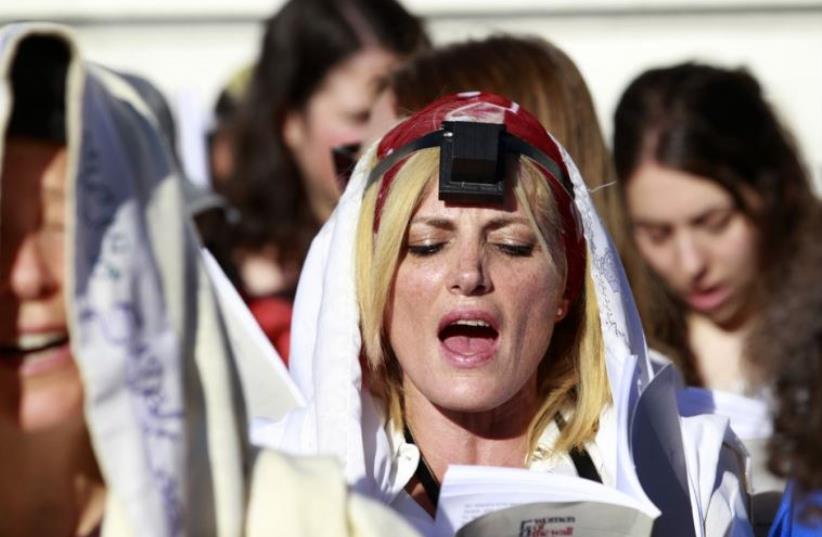 A Jewish female activist (C) from the Women of the Wall prayer rights group wears a prayer shawl and tefillin during a monthly prayer session near the Western Wall plaza in Jerusalem
(photo credit: REUTERS)
Advertisement
The progressive Jewish denominations in Israel, along with Women of the Wall and other groups, filed an amended petition to the High Court of Justice on Thursday, in which they called for the division of the current Western Wall prayer area into three sections, should alternative solutions not be implemented.The petition marks a break of the progressive movements with the government, after having participated in a negotiation process for almost three years, which was supposed to lead to the creation of a state-recognized prayer space at the southern end of the Western Wall for pluralist prayer.Having waited eight months for implementation to begin after the plan was approved by the cabinet in January this year, these groups have now decided to force the government’s hand through legal action.In September, the High Court asked the Reform Movement in Israel, the Masorti (Conservative) Movement in Israel, Women of the Wall and others to amend an older petition against the Western Wall Heritage Foundation, to address the failure of the government to implement the cabinet resolution.In an unusual step, the justices, including court President Miriam Naor and her deputy, Elyakim Rubenstein, urged the petitioners to re-file the petition within a week, and hinted that they may intervene in the long-running saga.The amended petition demands that either the government implement its own cabinet decision, made in January this year, or that it create an egalitarian prayer section at the Western Wall prayer area, which currently holds two prayer sections, one for men and one for women.The progressive Jewish movements, both in Israel and the US, have stated on several occasions that they are losing patience with the government’s failure to implement the deal, which took almost three years to negotiate, and that their next step would be to turn to the High Court.Implementation has been frozen due to the opposition of the haredi political parties to the plan, a stance which emerged after the resolution was passed by the cabinet in January.“The decisive majority of the Jewish public in Israel and the Diaspora supports the establishment of an egalitarian section at the Western Wall, and only the embarrassing capitulation of the government to the haredi parties is preventing it,” said Rabbi Gilad Kariv, director of the Reform Movement in Israel.“We hope that the High Court will instruct the government to stand by its decisions and return the Western Wall to the hands of the entire Jewish people.This petition is being filed not only in the name of the non-Orthodox movements, but also in the names of millions of Jews who feel excluded at the holiest prayer site to the Jewish people.”Kariv said that implementation of the original government resolution was the preferred option, but that if the government annuls its January decision then he hopes the court will intervene to create a third prayer section at the main Western Wall plaza.Attorney Yizhar Hess, the director of the Masorti Movement, said that the petition was being filed “with great pain.”“The government of Israel should be ashamed about this. A self-respecting state needs to stand by its written agreements,” he said, adding the coalition had submitted to “a small and extremist haredi minority,” and calling on the prime minister to stand by his word on enacting the Western Wall agreement.Chairwoman of Women of the Wall Anat Hoffman said that the petition had come about in response to the prime minister’s political alliance with the haredi parties.“The petition demands that gender equality and religious pluralism be respected at Judaism’s most holy site,” said Hoffman. “As such, it can be seen as a hopeful note tucked into the crevasses of the Western Wall during these Days of Awe, an expression of our belief that Israel will redeem itself from its own extremists.“It is time to liberate the Wall, and make it a home to all Jews, rather than another stronghold of state-funded extremist Orthodoxy.”