‘Do not die without going to Jerusalem’ 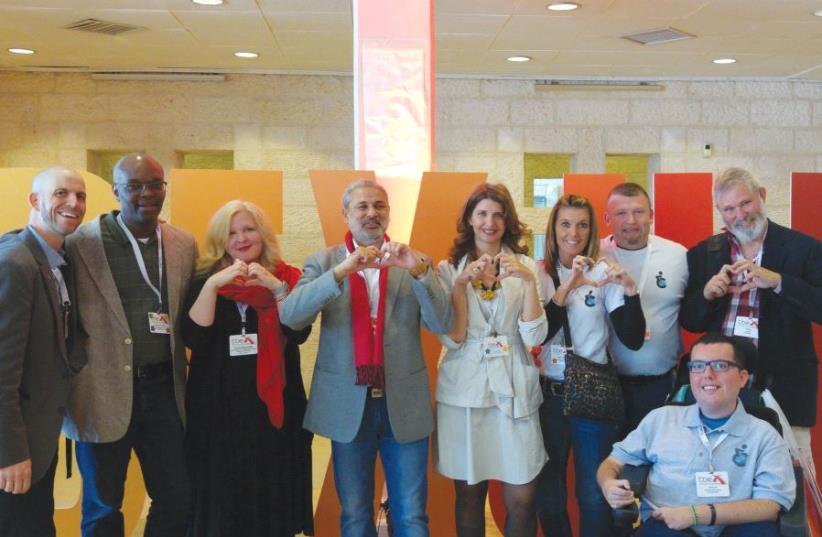 DIRECTOR OF TOURISM at the Jerusalem Development Authority Ilanit Melchoir (center) joins delegates in displaying their affection for the TBEX conference in the capital on Tuesday.
(photo credit: DANIEL K. EISENBUD)
Advertisement
More than 400 travel bloggers, writers and industry professionals from 50 countries convened in Jerusalem this week to attend the Travel Blog Exchange (TBEX), the world’s largest conference and networking event for online travel journalists.The annual three-day international conference, which has never been held in Israel, is being coordinated in partnership with the Jerusalem Conventions and Visitors Bureau under the direction of the Jerusalem Development Authority.“Each year, TBEX partners with host destinations in North America, Europe and the Asia Pacific to bring the travel industry’s most creative minds together to learn, network and do business,” conference organizers said in a statement.The first TBEX conference was held in 2009. Since then, it has grown into the world’s largest travel community gathering, with annual conferences attracting the most influential travel bloggers and leading digital content creators.

Ilanit Melchior, director of tourism at the JDA, personally welcomed the 400 delegates on Tuesday and noted that it had been an eventful week for the capital.“We have only just finished the International Jerusalem Marathon, which welcomed 35,000 runners from around the world, and here we have yet another important opportunity to show people from across the globe our special and inspirational city,” he said.Moreover, Melchoir noted that as of Tuesday, more than 18 million people had viewed the many blog postings sent out by delegates at the conference.Award-winning photographer and travel writer, Gary Arnd, whose blog EverythingEverywhere yields hundreds of thousands of hits each month, traveled from Minneapolis to participate.“I’ve been traveling around the world for 10 years, and have visited about 180 countries,” he said, adding that he first visited Israel in 2009.Asked his perception of Jerusalem versus its portrayal in the international media, Arnd, who is Christian, said many people lump the capital and country into the context of ongoing violence in the entire Middle East.“The closer you are to a place, you tend to look at it in finer detail, and the farther away you are, you paint with a very broad brush,” he said. “So, to people in America, it’s not just Jerusalem, it’s the ‘Middle East,’ and they’re worried about ISIS even here because this is the Middle East. They don’t really know what’s happening here.”The reality, Arnd said, is far removed from such false perceptions.Kerwin McKenzie, a popular blogger at Cruisinaltitude.com and TravelPreneur who specializes in helping readers take advantage of hotel perks around the globe, traveled from Houston.“This is my second time to Israel and first time to Jerusalem and I’m intrigued by the Old City,” he said. “You could spend a week there and still not see everything. I love people, so I love seeing the distinctions between the four quarters, and how all the people there from different religions live in harmony.”“I’ve never been to a place where religion plays such a big role,” said McKenzie. “But people are people here, and I absolutely feel safe. There is a holiness attached to Jerusalem.I was raised Christian, so seeing the Church of the Holy Sepulchre is pretty amazing.”Ajay Sood, who writes for Conde Nast Traveler and National Geographic magazines and the Huffington Post website, traveled from New Delhi.“In India, Jerusalem is seen as a holy city,” he said. “And in India, holy cities are typically very filthy and dirty, but when I came here my mind was blown because this place is very different. It’s cutting edge, and doesn’t look Middle Eastern. It has 2,000-year-old cobblestones, but it is amazingly clean.”Noting ongoing political terrorist attacks in India, Sood said he had “no issues about safety anywhere in the world.”“I feel absolutely safe here,” he said.Asked what he will write about Jerusalem, Sood smiled. “Very simply put, I will write: ‘Do not die without going to Jerusalem.’” A number of keynote speakers, including Jerusalem Mayor Nir Barkat, are on the conference agenda, which also includes a number of workshops and tours throughout the city.
Advertisement
Subscribe for our daily newsletter