"Although we have immense support from our friends, we often find ourselves alone on this crazy journey." 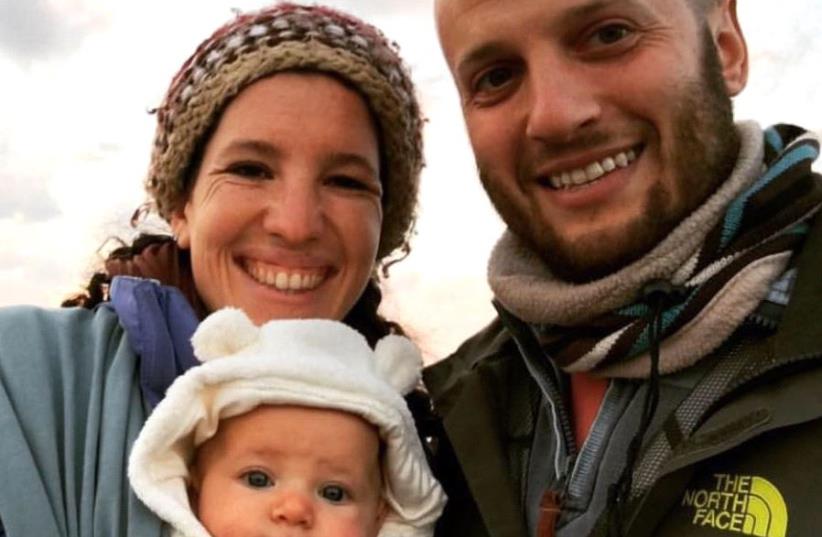 David, Emly and Noa Kay.
(photo credit: Courtesy)
Advertisement
A young American-Israeli mother launched a fund-raising campaign this week to help her husband fight a difficult battle against a rare form of lung cancer.David Kay, 32, is a British immigrant who moved to Israel nine years ago.In June 2016, just a year after his wife, Emly, 32, gave birth to their daughter, Noa, soon after the young couple had wed, David was diagnosed with stage IV non-small-cell lung carcinoma EGFR+ with multiple brain, liver and bones metastasis.Now, after fighting the battle alone for over a year, Emly has appealed for help via a fund-raising campaign called “Save Dave.”
“As Dave’s treatment progresses, we are realizing how much we need extra support,” she wrote. “We are surrounded by loving friends in our home in Israel, but our families are located in different countries, and the intense medical treatment that Dave requires is taking its toll not only emotionally but financially.”Emly’s family lives in the US, and David’s in the UK. While they have received vital support from both families, they need additional help.“We started to realize that we weren’t asking them for certain things because we were prioritizing when to ask them for financial support... but it’s really all important,” Emly told The Jerusalem Post on Wednesday. “And if we have the support of the community around us, it can increase the chance for Dave to have the life he deserves.”Emly noted that Dave was never a smoker and always led a healthy lifestyle.“Dave has only been able to work occasionally since his diagnosis,” Emly explained.David used to lead an active life as a passionate tour guide, a career he has continued in limited capacity on the rare occasions that he has been able to since falling ill, but which he one day hopes to resume.Emly works at Tel-Hai College in the Upper Galilee, close to the family’s home in Kibbutz Ginossar, and is also a yoga teacher.“Oftentimes, due to chemotherapy, radiation and a variety of pills that make up Dave’s treatment, we find ourselves not only with one household income but [with] the responsibilities of taking care of Dave, our daughter and daily tasks.Although we have immense support from our friends, we often find ourselves alone on this crazy journey,” Emly continued.There is currently no cure for the type of cancer David has, but the family hopes that through careful monitoring and effective treatment, the disease can be managed and David can go back to living a relatively normal life.To support the fees to make this possible, Emly decided to turn to the Internet in a plea for help. Funds will go toward consultations with leading lung cancer specialists; housing near the hospital during daily treatment; transportation to and from treatment; childcare for the baby during treatment; translating medical documents from Hebrew to English; attending lung cancer medical conferences abroad in order to learn more about his specific mutations and the treatments available to him; testing of the most effective treatment for David; and future treatments that are not covered by his health insurance.Emly launched the campaign on Tuesday, and over half of the $100,000 target was reached in the first 24 hours.The couple has already put some of that money toward getting second opinions.“It’s about prolonging Dave’s life – about how to help him live a quality life for as long as possible,” she told the Post.Donations can be made here:
Advertisement
Subscribe for our daily newsletter