Having toured internationally and recorded with Broza and other high-profile performers, the chorus has become an institution that combines song and dialogue.

For 10 years, it’s been an oasis of coexistence between Jerusalem’s Jewish, Muslim and Christian youth. And next week, with help from famous friends like David Broza, Mira Awad, Sameh Zakout and Guy Mintus, the Jerusalem Youth Chorus (JYC) will be celebrating its milestone anniversary with a special concert on August 8.

Having toured internationally and recorded with Broza and other high-profile performers, the chorus – composed of students from Jerusalem who come from varying religious backgrounds – has become an institution that combines song and dialogue. And, of course, they all have a passion for music and a desire to engage in meaningful intersectional conversations.

“At the first rehearsal, I realized that it was a bit different from the other kinds of things I’ve been to. I didn’t grow up around people who weren’t Jewish,” said student-turned-staff member, Shifra Jacobs, who joined the chorus as a 13-year-old, when JYC first began. “But honestly, it was normal from the start.”

She was mostly interested in the singing aspect of the group. She quickly acclimated to the unique environment and continued to attend throughout high school. Upon finishing her military service in 2019, Jacobs returned to the chorus as a staff member.

She described the program rehearsals – the core of the program – as a dialogue sandwich in which music is the bread. The singing-dialogue-singing model breaks the ground for natural warm-up and cool-down periods, which can produce very intense discussions. “When you sing in a group, it’s like being on any team. You know that what you do affects the group. It bonds you,” she said. 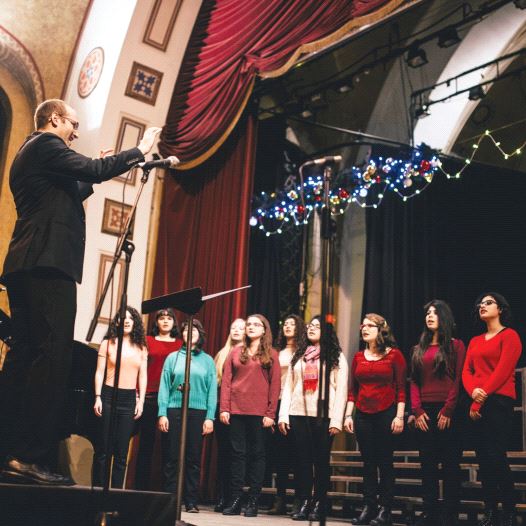 Micah Hendler, the founder of the Jerusalem Youth Chorus, said it’s impossible to distinguish between the importance of the dialogue and the music. “In the Chorus we use the music we make and the relationships we build as a community as a container for the dialogue,” he said.

“At the first rehearsal, I realized that it was a bit different from the other kinds of things I’ve been to. I didn’t grow up around people who weren’t Jewish.”

Not all of the students speak the same language (interpreters are provided for dialogue). Jacobs said that music serves as a common language on two fronts. First, it simply is a method of expression that is accessible without words. Second, by building a repertoire that spans different cultures, everyone gets a chance to share a piece of themselves.

“If we were to learn [a piece of music] that I grew up with, or someone who is Muslim or Christian grew up with – we make sure to sing everything – we start to learn about the cultures and see people getting excited. For example – we haven’t done this – but if we did a Schwekey song in the choir I would be like, ‘oh my god guys!’ and then we would talk about it,” she said.

AFTER BREAKING the ice, students go into dialogue with some common ground. Perhaps they’ve already shared a few laughs. To avoid new members from getting completely overwhelmed, the chorus staff refrains from beginning the year with the most intense topics. The program begins with more general discussions of topics such as equality, and continues along a set path, usually with a yearly theme.

“From the second [rehearsal] it’s really smooth. You know: ‘I sing and then I have dialogue and then I sing,’” Jacobs said.

She added that in the 10 years she has been with the chorus, she has never seen a dialogue get so heated that students decide not to come back for the second rehearsal. Nobody has ever felt so alienated from their fellow chorus-mates that they can no longer sing together.

When the pandemic hit and in-person rehearsals were no longer possible, Jacobs and the rest of the choral staff had to get creative. As anyone who has suffered a Zoom birthday party, baby naming or Seder knows, group singing and video conferencing do not mix well. So they began to work on songwriting. “I’ve been telling the kids, ‘your voice is really important.’ In the beginning, they almost never believed me,” Jacobs said.

She explained that most of the students didn’t believe they could produce original music themselves. But, “the first time did that, they ended up writing a full album during COVID. They didn’t even meet and they had an album written. We had a week of intensive recording, and then we [had] an album. It was crazy.”

Jacobs explained that for the 10th anniversary, “we are celebrating all of the achievements. It’s definitely a hard thing to do. The fact that we’ve succeeded and stayed alive as an organization for this long is really great.” Audience members can look forward to collaborative performances by the current participants, alumni, as well as special guests.

“There’s going to be great music and great memories,” Jacobs concluded. “And it’s a great chance to see a different side of Jerusalem – a beautiful side of it.”

Linda Gradstein contributed to this report.