“We had like one horse, and a pigeon… we won that war with a spoon.” 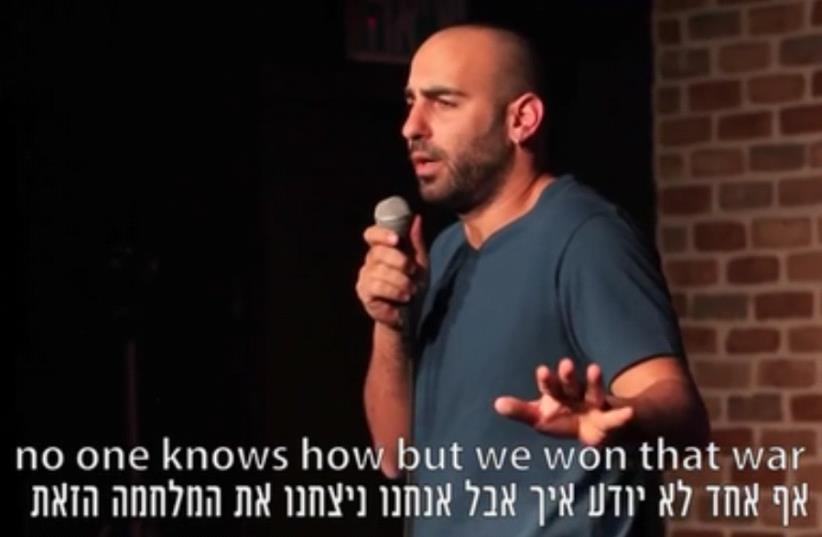 Yohay Sponder: Independence Day
(photo credit: YOUTUBE SCREENSHOT)
Advertisement
On May 2, 2017 Israel will celebrate its 69th birthday. Yom Ha'atzmaut, Israel Independence Day, is a day filled with pride, happiness, and non-stop celebrations in honor of the country that, beyond all odds, defeated the Arab armies to proclaim the first and only Jewish state.
Sponder Standup Independence
Yohay Sponder, one of the many Israelis doing stand-up comedy in English, gives his hilarious perspective on how we managed to win the war with only "like one horse, and a pigeon..." and why some Muslims have the “If you won’t give it back, I’m going to explode and kill everyone” attitude.See Yohay Sponder live at the Chelsea Hotel in Tel Aviv for Funny Monday, an all English stand-up show showcasing the best English-speaking talent in Israel. Upcoming Shows:May 8, 2017May 15, 2017May 22, 2017May 29, 2017For tickets and information, CLICK HERE. Click below for even more Israeli stand-up in EnglishYohay Sponder on FacebookIsraeli Stand-up in English on YouTubeDownload the StandApp app