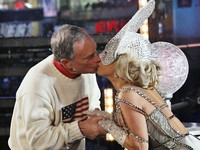 While you were kissing your significant other this New Year's Eve, or piously not celebrating the secular holiday, New York Mayor Michael Bloomberg watched the ball drop in Times Square and got his smooch on with none other than Lady Gaga. However, Bloomberg made sure to stay out of the doghouse, and told the press that the best kiss of the night came later on, with his girlfriend Diana Taylor.Natalie Portman spent her New Year's Eve in Israel, along her six-month-old son Aleph and fiancé Benjamin Millepied. Portman, who was born in Jerusalem, toured the capital, Tel Aviv and the Dead Sea, along with her family. The actress traveled with two bodyguards and checked into hotels under false names, in order to avoid the paparazzi.Portman's Black Swan co-star Mila Kunis just won a title that she's probably used to by now: Sexiest. Only this time, she's the sexiest Jewish celebrity, along with James Franco, according to dating site Jewcier.com. Franco was followed by Joseph Gordon-Levitt and Shia LeBeouf, while Kunis topped Bar Refaeli and Scarlett Johansson.Mayim Bialik did not make the list, but back in 1992, she made the cover of Sassy magazine (z"l). The Big Bang Theory star , back from the days when she was better known as the title character from Blossom, and talked about her memories from the TV show's heyday.In case you thought that Jewish parody songs are only for Hanukka, Kol Ish is here to prove you wrong, with "Kiddush Club," an ode to drinking alcohol on Shabbat mornings, to the tune of Usher's "Love in this Club:"The Weekly Schmooze collects the hottest Jewish culture news from around the world. Ranging from celebrities to philanthropy to quirky communities, we're here to schmooze about Jews. If you have any news to share with The Weekly Schmooze, write to:[email protected]