Every word and every sentence in the dialogues that appear in the parasha is there to teach us how to operate in a holy way.

By SHMUEL RABINOWITZ
View of the Cave of the Patriarchs in the West Bank city of Hebron on December 2, 2020.
(photo credit: DAVID COHEN/FLASH 90)
Advertisement

This week’s Torah portion, Chayei Sarah, is unique because its focus is almost exclusively on long dialogues that seem, at first glance, to be banal. At the beginning of the parasha, the narrative tells of the death of our matriarch Sarah and of Abraham’s desire to bury her in a burial cave in the fields of Hebron; that same cave where he himself, along with Isaac and Rebecca, and Jacob and Leah were to be buried as well. Until today, Jews visit the patriarchs’ graves in the Cave of the Patriarchs in Hebron. Abraham conducted a discussion regarding purchase of the field with the Hittites who then lived in Hebron, and with Ephron the owner of the desired cave. This discussion is cited in the parasha in full.

Our sages did not overlook this and made the following surprising pronouncement:

Rabbi Acha said: The ordinary conversation of the servants of the patriarchs is more beloved before the Omnipresent than the Torah of their sons, for the section dealing with Eliezer is repeated in the Torah, whereas many fundamentals of the Torah were given only through allusions. – [Genesis Rabbah 60:8] (Rashi, Genesis 24:42) 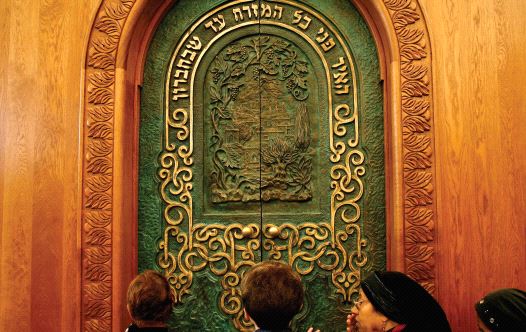 Jewish worshippers at the Cave of the Patriarchs, Hebron (credit: REUTERS)

Many of us are used to thinking that the more an act that we do is contrasted with our day-to-day lives, and the more it entails sacrifice and devotion, the holier it is and the more God is satisfied by it. But our sages emphasize that what we learn from the Torah is that all the Divine commandments given in the Torah are none other than a map to a proper and grounded life, a life that expresses the loftiest holiness. Our holy ancestors who illuminated a path in a darkened world teach us how to live a proper life, one that is full of holiness in every act we take. Of course, this does not negate the necessary commitment we must have to the commandments of the Torah, Divine tools for functioning in the world and the basis for the covenant between the Jewish nation and its God.

Every word and every sentence in the dialogues that appear in the parasha is there to teach us how to operate in a holy way: how to purchase land fairly, honestly, and respectfully; what we should focus on when searching for a partner; how we should behave with relatives; how we should pray when we feel we need help from above; and much more. Inspired by the parasha, we have the tools to adopt characteristics of responsibility, courage, humility, and joy of life.

Three times a day, we repeat in the first blessing of the amida prayer: “Who remembers the fathers’ acts of devotion, and who, in love, will bring a redeemer to their children’s children for his name’s sake.”

With these words, we declare that the complete redemption will come in the merit of the holy fathers – Abraham, Isaac, and Jacob – whose life stories we read in these weekly Torah portions. Rabbi Abraham Isaac Kook saw another layer to these words. Not only will the redemption come in the merit of the fathers, but it will carry their conversations and their way of life on its wings to shed God’s light on every sphere of life.  ■