Driven by hatred: A glimpse into the minds of antisemites in modern Germany

A historian and a linguist expose the ideas, codes and figures of speech that communicate antisemitism in the 21st century. 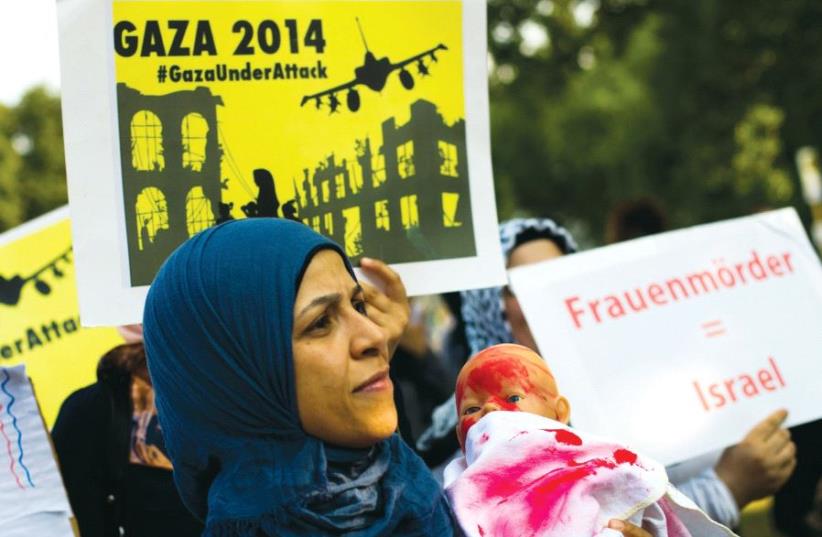 People hold placards during an anti-Israel protest in central Berlin in July 2014. The placard reads ‘Women murderers = Israel.’
(photo credit: REUTERS)
Advertisement
Throughout history, hatred of Jews has been expressing itself in ever-changing forms. In their book Inside the Antisemitic Mind: The Language of Jew-Hatred in Contemporary Germany, German linguist Monika Schwarz-Friesel and American historian Jehuda Reinharz describe antisemitism as a “chameleon” that “changes its colors according to the social and political situations, but stays the same at its cognitive and emotional core.”Reporting on the results of a study that extracted expressions of antisemitism from more than 15,000 letters, emails and faxes that have been addressed to the Council of Jews in Germany and to Israeli embassies all over Europe, Inside the Antisemitic Mind exposes the ideas, codes and figures of speech that communicate antisemitism in the 21st century.

Banning sale of Hitler"s Mein Kampf not easy, says German justice minister
The investigation shows how traditional antisemitic themes such as the blood libel, the idea of Jewish moral inferiority or the idea that Jews are money-grubbing usurers are transformed into interpretations of contemporary sociopolitical developments, such as the 2008 global financial crisis or the Middle East conflict.The latter leads to a demonization of Israel, which, the authors find, is the most prominent and recurring among contemporary antisemitic schemes.“Hatred of the Jewish state of Israel is at the center of the activities of antisemites no matter whether from the right, left, or mainstream... In fact, there is an ‘Israelization’ of modern Judeophobic discourse.” While this idea in itself is certainly not new, one of the great achievements of Inside the Antisemitic Mind is its scientific corroboration based on an extensive analysis of rich empirical data. The authors draw a clear distinction between criticism and antisemitic demonization of the Jewish state that applies classic anti-Jewish themes such as the blood libel, framing Israel as “a child-murdering criminal people who learned absolutely nothing after the Second World War!” Another example from the data recycles the theme of Jews as a menace to mankind, when it says Israel, “the only racist apartheid regime in the world, is the sole danger to world peace.” Authors of such statements often proclaim ostentatiously that they are not antisemitic. Defending themselves preemptively against anticipated charges, they declare themselves victims of false accusations imposed by Jews who try to shield Israel from criticism. This victim-perpetrator inversion is itself yet another staple of antisemitism.Remarkably, Schwarz-Friesel and Reinharz found that such concerns of “false accusations” barely accompany sober criticism of Israel that doesn’t convey antisemitic defamations.The focus of their investigation is on Germany; 14,000 of the communications that were analyzed were addressed to the Israeli embassy in Berlin and the Council of Jews in Germany. According to the authors, they “reveal the shocking truth about the continuity and persistence of the age-old hostility toward Jews,” in spite of all the efforts to erase it after the Holocaust. However, the study also makes clear that antisemitism is far from being a solely German problem.A review of 1,000 additional communications that were addressed to Israeli embassies in Austria, Switzerland, the Netherlands, Spain, Belgium, England, Ireland and Sweden provides reasons to assume that the German results might very well be instructive of the quality of contemporary antisemitic discourse in Western Europe and maybe even beyond. Besides national boundaries, antisemitism, the study shows, transcends sociocultural categories. Authors of the reviewed antisemitic texts include people with all kind of economic, educational and ideological backgrounds: “As depressing as the crude and violent antisemitic ravings of right-wing extremists were to all of us who worked on the project, we were far more appalled to encounter the hostile utterances by members of mainstream society. Scholars, lawyers, doctors, bank employees, clergymen and students used language that revealed age-old Judeophobic resentments apparently impervious to education or reflection on the experience of Auschwitz.”Strikingly, the book shows how various social and ideological groups each adapt antisemitic notions to their respective discourses. Quoting a multitude of examples from the reviewed data, the book conveys a palpable idea of how people from the Right, from the Left and from the Center write things that sound very different on the surface, but, in the end of the day, all convey the same antisemitic messages, dehumanizing Jews as inferior beings. While people from the extreme right are more inclined to curse Jews with vulgar insults such as “dirty Jew,” people from the mainstream use a less explicit language and often take the moral high ground to slander Jews as moral inferior beings that, by extension of being identified with Israel, violate standards of human rights in the Palestinian territories.Providing its readers with important insights into the evolution and adaptation of antisemitic ideas, the book greatly adds to a better understanding of the persistence, variety and dispersion of antisemitism. Its authors both belong to the leading capacities in their respective fields. A professor of linguistics and cognitive sciences at the Technical University of Berlin, Monika Schwarz-Friesel is one of Germany’s top experts on antisemitism. Judah Reinharz is a professor of Jewish history who lives in the US and formerly served as president of Brandeis University.While the book presents the results of scientific research that cannot be elaborated entirely without jargon, overall it uses clear language and a straightforward way of developing the argument, making it amenable also to the non-academic reader.