Unity is not about uniformity 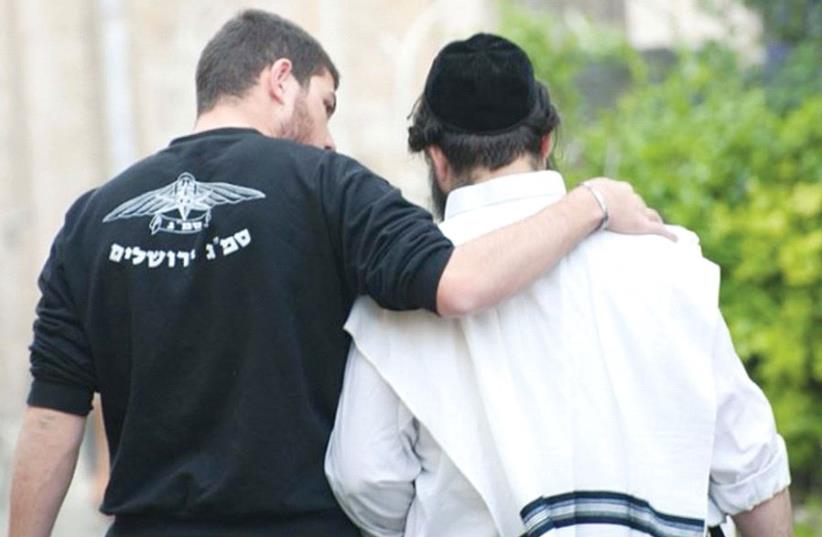 A secular and religious Jew walk arm in arm as a celebration of Jewish unity
(photo credit: KAREN ABRAMSON)
Advertisement
A growing chorus exists in a Jewish world of voices increasingly worried about Diaspora life, expressed through concerns about intermarriage, polarization on college campuses, support for Israel and more.The concerning part to me about these issues is not that they seem intractable – vexing problems often do until the solution is found – but rather the approach of the most concerned parties.The solutions offered to these modern-day Jewish challenges are often presented as uniquely correct, inherently discounting those who feel differently. Said in a different way, these solutions conflate unity with uniformity, ignoring that the true strength in being united is in accepting and recognizing the value of diversity.Unity is not about uniformity, but many voices around the Jewish world speak as if having divergent opinions on important issues to the community is somehow flawed and problematic.It seems a bit amazing that people who make jokes about two Jews-three opinions turn around and call others in the community something akin to being traitors just for voicing an alternative opinion. Real unity, to me, it seems, is being unified in diverse beliefs. Not only is that much more constructive to building inclusive and strong community, but it also appears to be a lesson learned over the last 2,000 years of Jewish history.Much is made of the Jewish people being the only group still around from biblical times, and one key reason is clearly that Jews have been able to adapt and be part of diverse societies, while keeping the unity of Jewish connection.One important uniqueness of the Jewish people, it seems, is that there is unity at the core of Jewish experience even while culturally very diverse. Jews have been Russian and Persian, Moroccan and Polish, but they have always been Jewish. The message of survival of 2,000 years is about the strength in diversity.Rich or poor, Left or Right, religious or secular, gay or straight, our diversity has been an asset even as we stayed united by the concept of Judaism. That is why the threat of disunity is so pernicious, and the accusations of disloyalty so counterproductive.What then is the solution to effectively address these very real issues of concern as a community? My suggestion is to find individuals and mentors within the community who can and are willing to bring forward different viewpoints to be shared in a way that doesn’t silence one side or the other. This requires courage, for those who are willing to stand in the middle and hold up multiple views and sides at once, but it is crucial if we don’t want to see the community divide itself in a way that we can’t even talk to each other, or the presence of one group becomes mutually exclusive for others. This requires bringing out the voices from the community with different views with the goal of leading to constructive discussion. Right, Left, religious, secular, minorities within the community – all these voices must be brought out and made audible for the other in a way that encourages open conversations and welcomes diversity of opinions.The difficulty of the challenges facing the Jewish community today cannot be understated, but neither too can the threat of the community tearing itself apart by calling each other traitors to the cause. The lesson instead, is to keep our uniqueness of being open to each other’s uniqueness.To take our diversity of opinion, beliefs and attitudes as a fundamental strength, not as cause for concern. I see this vision as a motivation driving the Jerusalem Unity Prize and Unity Day and why I feel these types of initiatives deserve even stronger embrace within the diverse Jewish communities all over the world.Our unique challenge remains to confront those who proclaim to be the arbiters of truth, of knowing what is best of the Jewish community and discounting all those who feel or argue otherwise. The old joke of the man stranded on a desert island who builds two synagogues, one for him and one he will absolutely never set foot in, carries a warning. We too can be stranded by dividing ourselves, and by discounting others as not acceptable members of our group, just as we can choose the alternative and celebrate our diversity as a strength and our unity as the greatest outcome of true diversity. ■ To find out more about how you can become involved with Unity Day activities in your area please visit www.unityprize.org.The writer is chairman of the Council of Young Jewish Presidents and vice-president of United Hatzalah of Israel.