"I have learned different types of hunting from my ancestors because they were hunters too," said 49-year-old Jan Agha, a farmer in Parwan province. 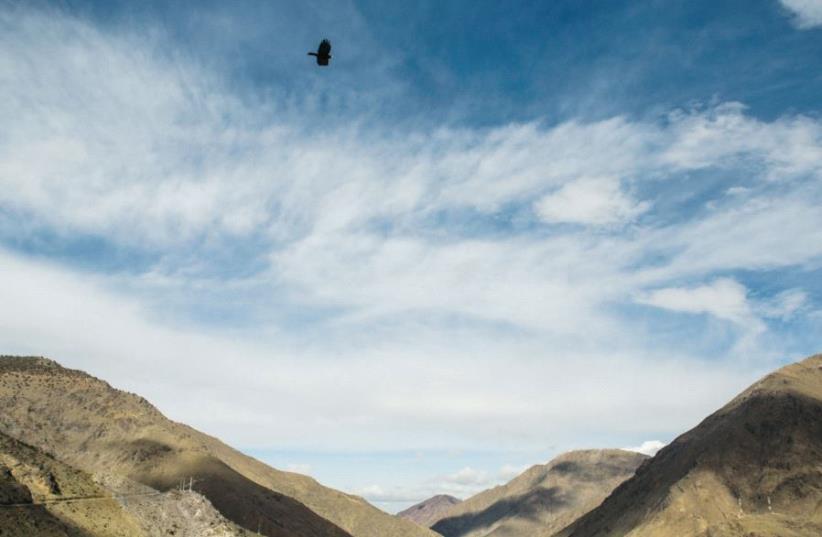 A bird flies over the Atlas Mountains
(photo credit: SARAH LEVI)
Advertisement
As the early morning light breaks over the plain north of Kabul, bird hunter Jan Agha checks his snares as he has done for the past 30 years, hoping to catch a crane, using a tethered bird to lure others down to the nets.
Bird hunting is an ancient sport in Afghanistan, where local and migrating species have flocked for thousands of years and where even amid the chaos of the past 40 years of conflict, the tradition persists.
"I have learned different types of hunting from my ancestors because they were hunters too," said 49-year-old Jan Agha, a farmer in Parwan province.
"Some of my sons have learned hunting from me and I hope to see at least two of my sons become hunters so my name is remembered and people know my sons after my death."
The war has left much of the environment near Kabul devastated with uncleared mines, pollution, uncontrolled building and general neglect. Only in the last few years has there been an effort to restore areas like the former royal hunting grounds at Kol-e-Hashmat Khan in the city's southwest.
Spring is the season of cranes, which the hunters try to catch alive in snares, using a specially trained tethered bird whose cries attract passing flocks.
"I like this crane because it won't be silent when the other big groups of cranes come, and it always forces them to come down. I like it because he is really a hunter bird."
With environmental controls virtually non-existent, there is little check on how many birds are caught or shot and Jan Agha, who started hunting when he was around 12 or 13, reckons he has taken more than 1,000 cranes and an uncountable number of quails, ducks hawks and sparrows.
The birds are usually taken to shops near the town of Bagram or to Kabul itself, where there is a popular bird market in the center of the old city.
For Jan Agha, hunting is a relief, taking him out of the daily round and into the harshly beautiful countryside, where groups of hunters set out in the night, picnicking at night in the desert before testing their skills at dawn.
"The pleasure of hunting is to be in open space. I like the mountain, desert, shotgun and being awake during the night to hunt," he said. "The pleasure of hunting is to be a success in it. A hunter's hope is hunting. Being a success in every job in the world has a special pleasure."