So what can the Saudis buy with all this money? 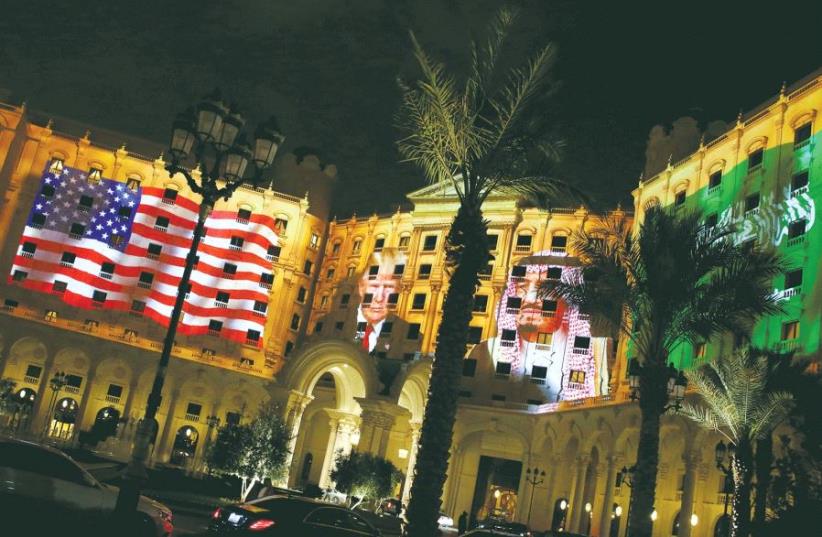 IMAGES of US President Donald Trump and Saudi Arabian King Salman bin Abdulaziz Al Saud are projected Saturday on the front of the Ritz-Carlton, where Trump was staying in Riyadh
(photo credit: REUTERS)
Advertisement
US President Donald Trump signed defense and economic deals with Saudi Arabia totaling up to $380 billion over ten years on Saturday. The first part consists of $110b. to buy US arms, which will help Saudi Arabia “counter Iran,” according to the Khaleej Times.It is part of a larger security arrangement Trump is discussing with Gulf Arab states that the US president described as involving “lots of beautiful military equipment,” according to Al-Arabiya TV.Israel’s recent military aid package and buying spree inked last year with the Americans totals only $3.8b. per year.So what can the Saudis buy with all this money? First of all, they want the anti-ballistic missile and radar system designed by Lockheed Martin called the Terminal High Altitude Area Defense (THAAD). One battery of the system, which consists of six launcher vehicles with eight missiles each, along with the radar, can cost up to $800 million. How many of these would Saudi need and for what purpose?Houthi rebels have used drones to attack Patriot missile radar stations after Saudi Arabia intervened in Yemen. The THAAD will defend against Iran’s missile program, potentially protecting all Gulf Arab states as well.Saudi Arabia also wants the Lockheed Martin F-35 Lightning II, and could purchase up to 100 of the planes to bolster its squadrons of S-15SA s and older planes. At $100m. a piece, that’s another $10b.As part of the Saudi Naval Expansion Program, the kingdom wants to buy half a dozen Lockheed Martin-built frigates. According to the United States Naval Institute News, these are based on the Freedom-class littoral combat ships, and will cost around $6 b. But that’s not enough to bring Saudi naval supremacy. It also needs a bunch of patrol boats and expensive radar systems. This makes sense, since Houthis attacked a Saudi naval ship last year. They need patrol boats to ward off Iran’s highspeed small boats, which have harassed US ships.Saudi also wants hundreds of Blackhawks, MH-60s and CH-70 helicopters, as well as Abrams tanks and MRAPS .All of these acquisitions are designed to vastly increase the kingdom’s military capability and power in the next decade and make it one of the strongest and most modern militaries in the region.It will outpace Iran’s military, parts of which are decaying, and make Saudi a military shield for Jordan and the Gulf. Most of all, it represents a massive cash infusion for the US defense industry, and Lockheed Martin in particular.