Turnout again low in most cities and among citizens of Palestinian origin. 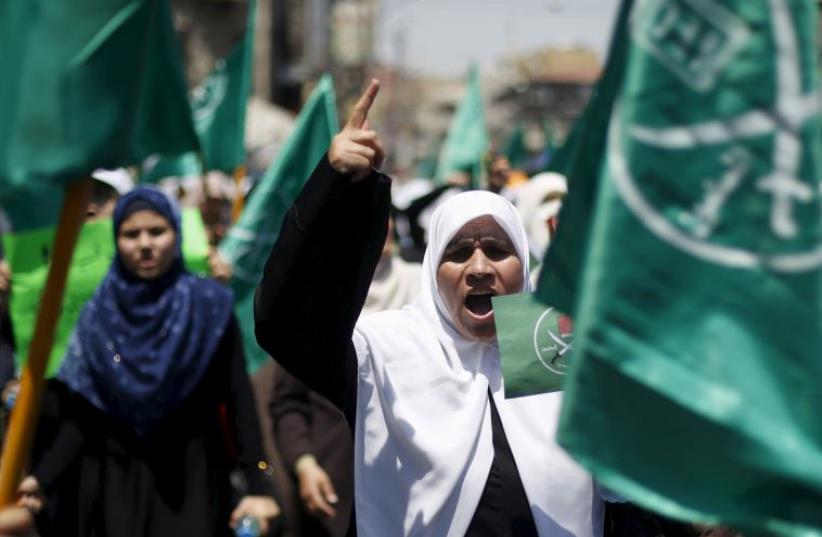 Protesters from the Islamic Action Front wave their party flags and shout slogans during a protest in support of Palestinians
(photo credit: REUTERS)
Advertisement

The decision by the once-strong Islamic Action Front to suspend its participation in elections has had no effect on voter turnout in Jordan. The final turnout in the municipal and governorate council elections that took place Tuesday was announced at 29.6%.

Jordanians of Palestinian origin as well as political party candidates made a very weak showing as well. A total of 1,363,294 Jordanians voted, out of 4.6 million eligible.

In the previous local elections in August 2017, in which the Islamists participated, turnout was 31.7%.

According to the Independent Election Commission, 4,646 candidates were nominated, including 100 for mayor, 1,018 for city council, and 289 for governorate councils. Women accounted for 846 of the candidates.

For the first time in Jordan’s history, 10 party members won mayorships. Seventy-five of the 100 mayors are newly elected.

Sixty-eight women won council seats beyond the quota, meaning 27% of all council members are now female.

People walk towards a polling station to cast their ballot in the municipal and local governorate councils elections in Amman, Jordan March 22, 2022 (credit: REUTERS/ALAA AL SUKHNI)

Murad Adaileh, the secretary-general of the Islamic Action Front, the political wing of the Muslim Brotherhood in Jordan, told The Media Line the elections were engineered and forged the will of the public.

“What we have seen in the local elections reminds us of previous elections in 2007,” he said.

Jordanian officials including the former head of the General Intelligence Directorate, Muhammad al-Raqqad, have admitted that 2007 saw the interference of the government in fixing the results.

Participation in major cities such as Amman, Zarqa, and Irbid was very low as in years past. In the capital Amman (where the mayor is appointed by the king) the turnout failed to cross the 15% mark, while in Zarqa it was just under 17%. However, in Ajloun 63% of voters cast ballots, in Mafraq 61%, Jerash 59%, and Irbid 41%.

Local elections in Jordan usually see a large difference in the turnout between major cities, where there is strong Islamic support, and the governorates, where elections are often based on tribal coalitions.

Jordanians of Palestinian origin are also generally absent in local elections. Palestinian refugee camp residents are not eligible to participate because they vote for local camp committees instead.

Mohammed Ersan, a veteran journalist who has covered several elections, told The Media Line that political parties, which are expected to become strong enough within 10 years to govern the country, did not fare well either.

“Political parties were nowhere to be seen in these elections. Of the 4,646 candidates who competed in the local elections, a mere 74 nominees belonged to registered parties,” he said.

Ersan said that restrictions on freedoms have hurt the political parties.

At a press conference Tuesday attended by Middle East Eye, Amer said “there was violence in cities like Jerash, Fuheis, Mafraq, and Ma’an.” He added that the secrecy of voting was compromised in many polling booths.

“There were cases of identity theft in a number of centers for women voters and there were clear signs of vote-buying in the capital Amman,” Amer said.

Jordanian security was compelled to contain violence during and after the elections.

Amro Nawaiseh, the director of the RASED project, told The Media Line it was too early to know whether the violence had any direct effect in swaying election results.

Mohammad Rawashdeh, spokesman for the independent Election Commission, said there were no registered cases of vote-buying affecting the electoral process. He admitted that some individual violations were recorded and dealt with but said there were no major ones.

The government deployed 55,000 security personnel throughout the kingdom to oversee the voting process.

The Jordanian government allowed public employees two hours off to allow them to cast their ballots. An effort to ban celebratory firing of weapons appears to have succeeded in reducing the phenomenon.