At Hanukkah parties in Washington, signs of healing from rifts over Iran

Many treated this holiday as a moment to take stock of a fight that traumatized the community, that shook its confidence in itself and that drew in a president. 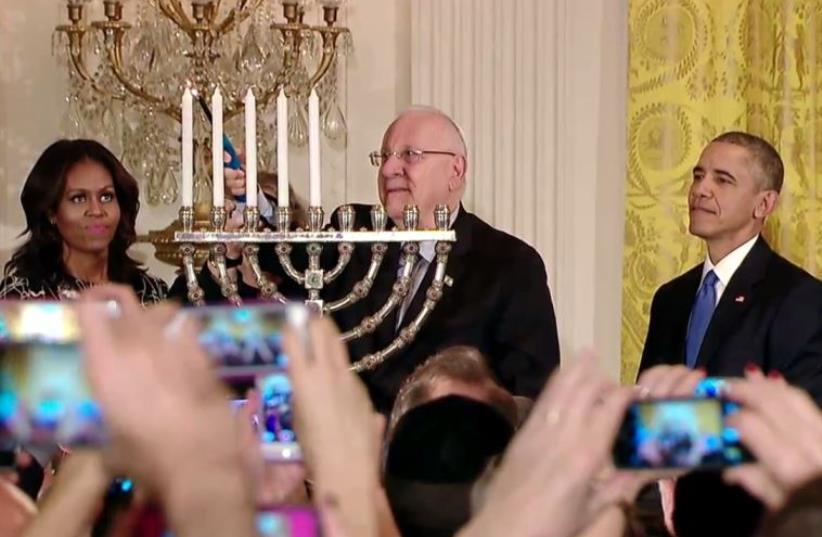 Obama and Rivlin at the White House Hanukka Reception
(photo credit: screenshot)
Advertisement
WASHINGTON -​ Much has happened since leaders of the Jewish community last met all together on the State Floor of the White House– drinks in hand, served lamb chops and sweet potato latkes, mingling throughout the mansion's color-themed drawing rooms.Only five months ago, many of these leaders were not only engaged in a pricey, public, pitched battle with the president of the United States. They were battling amongst themselves. According to an AJC poll taken before a vote in Congress on whether to approve the Iran nuclear deal, the American Jewish community was evenly split on the merits of that accord– a split, according to its data, reflecting deeper divisions within the community down partisan lines.Rhetoric over the deal grew so heated from both sides that one Democratic insider, with the National Jewish Democratic Council, warned of the community tearing itself apart. But guests at this party, as well as several others around Washington, expressed resolve to push past one of the worst feuds involving the American Jewish community in modern history, toward unity in future battles guaranteed.In the months since that affirmative vote, both US President Barack Obama and Prime Minister Benjamin Netanyahu have chosen to remind people precisely why the US-Israel relationship remains sound at its foundations. Hillary Rodham Clinton, front-runner for the Democratic nomination for president, told a think tank here last week that America's current leadership must urgently remind younger generations of their country's shared values with Israel.Indeed, that rift– both between and amongst Zionist Americans and the American Left over the future of Israel– was the primary point of discussion on the holiday party circuit this year. The Iran deal will proceed and Israel will readjust; But rising anti-Israelism now grips the community with an urgency that both president and prime minister can get behind.Liberal democratic values– the story of the immigrant, the rights of self-expression, freedom to worship and self-determination– were basic points of shared history highlighted by Obama, by Israel's President Reuven Rivlin and by Israeli ambassador to the US Ron Dermer at their Hanukkah parties. Often in disagreement on best tactics in their shared fight against Islamist terror, the Obama and Netanyahu governments have leapt at the chance to express unity in their condemnation of far-Right calls to discriminate against Muslims worldwide."Whether it’s standing up for the dignity of refugees, standing up against anti-Semitism – or any kind of bigotry or discrimination leveled at any religion– or standing with our ally the State of Israel, we can raise our voices, each of us, for the security and dignity of every human being," Obama said. "Because we are at our best when we believe that our light has the power to shine through the darkness; that's the story of the Jewish people, the story of America."Obama did not mention the nuclear deal in his remarks. Nor, at the Israeli embassy on Thursday night, was the topic extensively discussed by Dermer, who led Israel's lobbying campaign against the deal through Congress' trenches in July and August. What now concerns him the most, Dermer told the gathering, is something far different: The prospect that Jewish Americans may lose sight of the "justice of our cause"– of the principles that laid the foundations for the reestablishment of a Jewish homeland, for its successful growth and for its loyal support from consecutive US governments.Hosts kept their guest lists politically diverse after few supporters of the Iran deal received invitations to the embassy's Rosh Hashanah reception earlier this year. And when cocktail conversation steered away from divisive politics, settings provided their own narratives: The ornate Library of Congress, where DNC chair Debbie Wasserman-Schulz hosted once again, played after party to the White House, where the US Marine Chamber Orchestra offered a rendition of Hava Nagila that brought celebrants to dance along the Cross Hall.Some are still nursing deep wounds. All remain vigilant, preparing for constant updates on the implementation of the deal over the course of the next decade. But many treated this holiday as a moment to take stock of a fight that traumatized the community, that shook its confidence in itself and that drew in a president. Only months later, that same community managed to come together, as it always has, to rejoice.