Following a major financial crisis at the Western Galilee hospital, council heads in the region call on Netanyahu to stop offering help to Syrians until the situation is resolved. 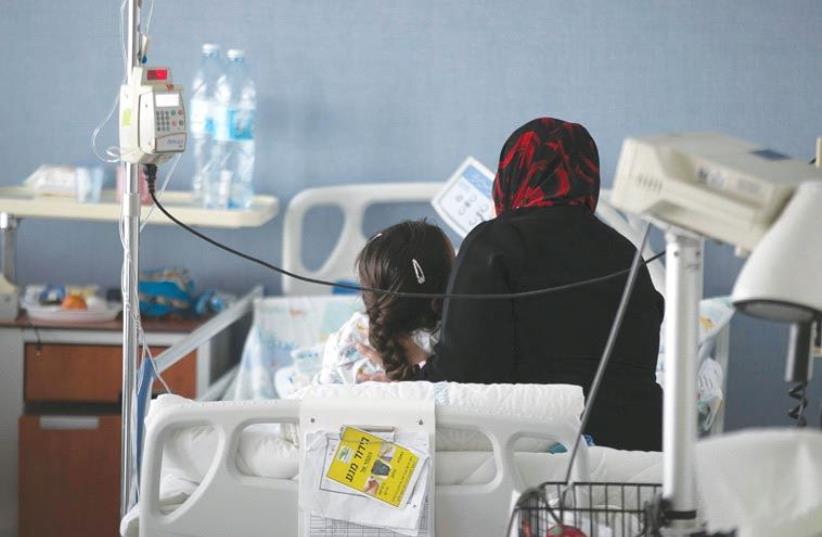 Injured individuals Syrians cares for in Israel
(photo credit: REUTERS)
Advertisement
Council heads in the northern Israeli region of the Galilee demanded that Prime Minister Benjamin Netanyahu order the immediate freeze of medical aid the country provides to Syrian refugees at the Western Galilee Hospital in Nahariya. The government-run hospital is the main medical center in Israel that officially helps injured people and refugees from the war-addled country. According to the council heads, the 600,000 residents of the Western Galilee do not have sufficient medical care available to them because the hospital is short on funds and is invested instead in the treatment of injured Syrians. "We fully recognize the importance of the humanitarian mission of treating our Syrian neighbors," the council heads explained, but charged that it was "inconceivable that rehabilitating war refugees would come at the cost of the health and lives of hundreds of thousands of residents of the Western Galilee."According to the letter they penned and that was obtained by The Jerusalem Post's sister publication Ma'ariv, the government has been withholding financial resources that the hospital is legible to receive by law but still tasked the medical center with the responsibility of treating the Syrian refugees "without allotting [specific] funds for that." Council heads representing regional councils such as Ma'ale Yosef, Kfar Vradim, Shlomi, Ma'alot-Tarshiha and Acre accused the government of overlooking the medical crisis the hospital was suffering from, saying that it was "on the verge of utter collapse due to the blatant discrimination" it was facing.They also mentioned that the hospital was in a deficit of NIS 300 million. "It is unheard of that the government" places the singular responsibility of treating the Syrian refugees "without allocating a budget to their treatment," the letter continued. "And all that without fulfilling its [the government's] obligations and legal duties to the people of the Western Galilee, who are starving and dying, day after day, because of [the government's] helplessness," they added. The council heads concluded their letter by asking that the prime minister immediately get involved in the financial crisis the hospital is undergoing. "Your immediate intervention as prime minister is requested, including ordering right away that the health minister redirect the burden of treating the Syrian injured to other medical institutions in Israel- [such as] those that have more funding and those that did not fall victim to discrimination." Their letter comes amid an escalation on Israel's border with its northern neighbor, as errant fire from the internal fighting in Syria spilled over to the north twice within 24 hours. Speaking about the projectiles that hit Israel's north, Netanyahu said in a stern warning to Syria that “We will not accept any kind of 'drizzle, not of mortars, rockets, or spillover fire [from the Syrian Civil War]. We respond with force to every attack on our territory and against our citizens.”Orit Agami contributed to this report.