Has Israel flip-flopped on Kurdish independence?

Despite Netanyahu's apparent backtrack, Jerusalem would likely welcome an independent Kurdistan as an important ally.

By CHARLES BYBELEZER/THE MEDIA LINE
OCTOBER 3, 2017 06:43
Kurds celebrate to show their support for the independence referendum in Duhok, Iraq, September 26, 2017.
(photo credit: REUTERS)
Advertisement
The Kurdish people of Iraq made their voices heard last week, overwhelmingly voting "yes" to independence in a contentious referendum opposed by most of the international community.In fact, the lone nation to express support for the move was the tiny Jewish one, with Prime Minister Benjamin Netanyahu having last month described the Kurds to a delegation of visiting US congressmen as a "brave, pro-Western people who share our values."Since then, however, the premier has seemingly backtracked, reportedly restricting his cabinet members from commenting on the vote's outcome because of the issue's "sensitivity."According to Dr. Gallia Lindenstrauss, a Research Fellow at the Israel's Institute for National Security Studies, "Jerusalem has an interest in the formation of an independent Kurdish state, but there is a question of what is the best way to support this cause—covert or overt support, or some combination of the two."I think Israel correctly identified that the Kurds would move ahead with the referendum and that there are certain conditions in today's international system that may lead to Kurdish independence, hence it should express its support," she explained to The Media Line. "The downside is [that doing so] offers fertile ground for those who oppose Kurdish independence to dismiss it as a Zionist/western conspiracy to weaken the Arabs."Indeed there has been blow-back, even from some Kurdish officials who told the Reuters news agency that Netanyahu's statements were damaging. "Our adversaries attack us as a 'second Israel in the region' and this kind of Israeli talk contributes to that,” one anonymous official was quoted as saying.In this respect, Iraqi Vice President Nouri al-Maliki released a statement ahead of the referendum that included a reference to Baghdad's resistance to "the creation of a second Israel in northern Iraq." The Iraqi government has since implemented a flight ban on the Kurdistan region and threatened to deploy troops to the oil-rich city of Kirkuk, a disputed city currently held by Kurdish troops.Yet the country most displeased with Israel's position is Turkey, with President Recep Tayyip Erdogan having threatened last week to halt the normalization of ties with the Jewish state, which have been strained since 2010 when nine Turkish nationals were killed by Israeli forces who came under attack while attempting to halt the Mavi Marmara ship from breaching the naval blockade on Gaza. 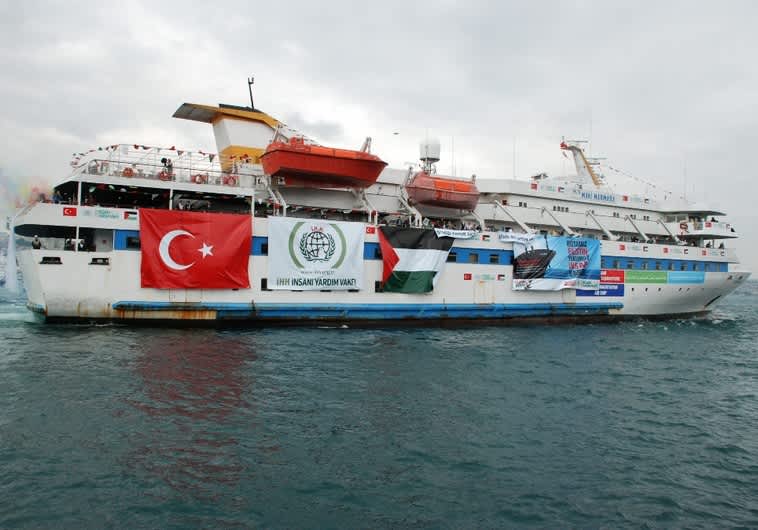 The Turkish ship Mavi Marmara/ Wikimedia Commons "If Israel does not reconsider its support for Kurdish independence, Turkey cannot take any steps [with Israel]," Erdogan asserted last week; this, despite Netanyahu's clear distinction between backing for the KRG (Kurdistan Regional Government) and the PKK (Kurdistan Workers' Party), the latter of which is designated by Ankara as a terrorist group and has been waging an insurgency in Turkey for decades, resulting in nearly 40,000 people killed.The Israeli premier, while confirming that Jerusalem "sees [the PKK] as a terror organization," nevertheless highlighted what he views as Ankara's hypocrisy due to its "support [for] the terror organization Hamas."The war-of-words was renewed over the weekend, with Jerusalem slamming Erdogan's conspiratorial claim that the Mossad interfered in the independence vote. "Israel played no part in the referendum," Netanyahu stressed, "aside from the natural, deep and long-standing sympathy the Jewish people have for the Kurdish people and their aspirations."According to Israeli parliamentarian and Yesh Atid Party leader Yair Lapid, an outspoken Turkey critic and proponent of Kurdish independence, "The government should make clear to Mr. Erdogan that we do not conduct our foreign policy according to threats and demands."In a statement provided to The Media Line, he affirmed that Israel "should stand by the Kurdish people, it is morally and strategically the right thing to do. We remember what it is to fight for your homeland and we shouldn’t allow the Kurds to stand alone in the face of threats from Turkey and Iran."The situation is nevertheless delicate, as it puts Jerusalem at odds with the US, which has come under some fire from democracy advocates over its antagonism to the Kurdish vote. In advance of the vote, the State Department expressed "strong opposition" to the referendum, whereas Secretary of State Rex Tillerson thereafter reinforced that, "The vote and the results lack legitimacy."However, Washington's position is potentially more fluid than the likes of Ankara and Tehran (the latter of which holds tremendous influence over Baghdad and also has a large Kurdish minority that could, in turn, move to seek further autonomy in the Islamic Republic). In this respect, Democratic Senate Minority Leader Chuck Schumer last week called on the Trump administration to back Kurdish independence. "It's past due that the world, led by the United States, immediately back a political process to address the aspirations of the Kurds," read a statement from the Schumer's office. Admittedly, for the Americans the issue is a complex one. On the one hand, the Kurds are at the forefront of ongoing US-led efforts to eradicate the Islamic State from Iraq and Syria. Kurdish YPG militias, which comprise the bulk of the Syrian Democratic Forces, have been the most efficient fighting force in Raqqa—the capital of ISIS' self-declared "caliphate"—which has been almost entirely liberated.At the same time, Washington must take into account the competing interests of its Middle East allies, in addition to its own longstanding policy of promoting a unified Iraq, which has been paid for in both blood and treasure since the US military invasion in 2003."If the Kurds are persistent, [however,] it is inevitable that the U.S. will change in the future its policy and be a strong supporter of such an independent entity," Dr. Lindenstrauss, also a Visiting Fellow at the Bipartisan Policy Center in Washington, D.C., asserted to The Media Line. "An independent Kurdistan will be a pro-Western state and will help curtail Iranian growing dominance in the region."As such, both the Kurdish and Israeli governments have overlapping political and security interests, whereas from a religious and social standpoint the Kurds are moderate and identify with Jewish People's historical struggle as a persecuted minority in the Middle East. The Kurds therefore view Israel as model for achieving their own independence, and, in fact, Israeli flags were proudly flown at pro-Kurdish rallies throughout world, including in Erbil, ahead of the referendum.While Israel seems to be hedging its bet, most analysts agree that a strong independent Kurdistan would be welcomed by Jerusalem as an important new ally. And as per those countries that might be opposed to such an alliance, Israel might point to the prevailing regional chaos to evidence that the formation of a "second Israel" would, by contrast, be a positive development.