Kurds have recently stepped up attacks on Revolutionary Guards in demand for autonomy and democracy. 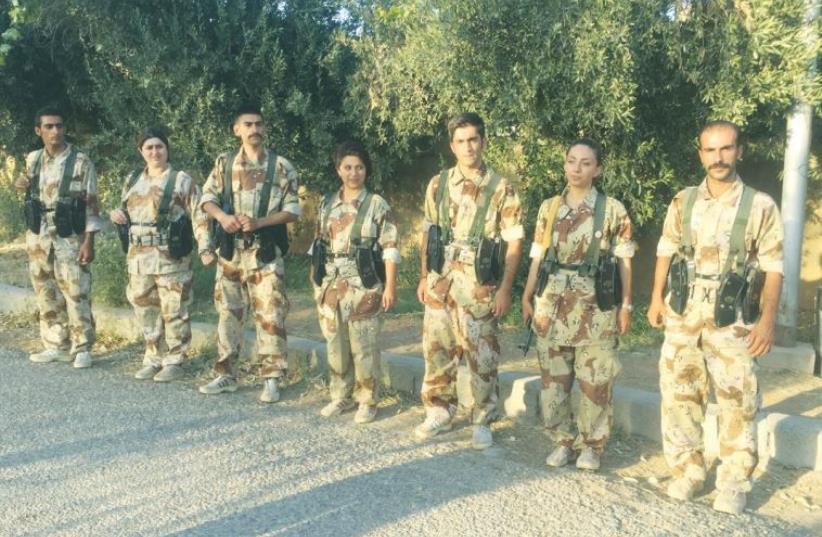 KURDISH PDKI Peshmerga train to go to Iran to resist the regime.
(photo credit: SETH J. FRANTZMAN)
Advertisement
PDKI HEADQUARTERS, Iraq – When Shah Mohammad Reza Shah Pahlavi was deposed in Iran’s 1979 revolution, Mustafa Hijri wanted a democratic government.Instead, an Islamic Republic emerged in Tehran. Hijri, the 71-year-old leader of the Democratic Party of Iranian Kurdistan (PDKI), looks back on 37 years of struggle against the Shi’ite regime.In the last several months, his party has launched renewed attacks on the Revolutionary Guards, and Kurdish fighters have killed dozens of Iranian soldiers.“In 2015, when we saw they [Iran’s government] will not solve the Kurdish issue, we decided to send our Peshmerga [Kurdish fighters] back to Iran,” says Hijri in his office in northern Iraq. “Iran knew that our men had entered the country, but because they were negotiating with the P5+1 [the Iran nuclear deal], they wanted to show it was stable, and they wanted to show they don’t have conflicts.”Now the PDKI’s Peshmerga are becoming more active in fighting Iranian forces, and Hijri is a wanted man by the regime. In 1989 and 1992, PDKI leaders were assassinated in Austria and Germany, respectively. Last month, Iran threatened to bomb Koya in the Kurdistan Regional Government in Iraq if PDKI did not end its operations.Driving to meet Hijri, our SUV was accompanied by an armed escort; when we entered his office in a nondescript location, the shades were drawn.Instead of explaining his views on Iran, Hijri’s first comment was about why Israel opposes Iran.“We have common enemies, but more countries support Israel,” he noted.Iran is a threat to the region, he said, and its support of Hezbollah and Hamas shows that it considers Israel its main enemy.“Iran spends a lot of money on them against Israel,” says Hijri. “I think that Israel should consider Iran as the main enemy and try to make it weaker. Hezbollah and Hamas receive a lot of money, and it helps them stand against Israel, so Israel should be providing help to opposition groups standing against Iran.”Among those opposition groups are the six million Kurds in Iran who lack many rights, and the PDKI has urged them to boycott the regime-run elections. After a decade of fighting in the 1980s, the Kurds in Iran spent 20 years quietly living under the ayatollahs. But the PDKI sees no progress in Iran’s treatment of the Kurds.Hijri warned in 2006 – when the US appeared to be negotiating about the nuclear issue – that along with the Europeans, it should concentrate on supporting human rights and democracy in the country. The Iran deal last year has cemented the regime economically, he said, and will strengthen it.“We want a federal Democratic state,” Hijri explains. “We ask for democratic government. We want each nation to have their autonomy, and each nation should have its own representatives in the central government.”Hijri noted that his group works with a Congress of Nationalities for a Federal Iran (CNFI), including other groups such as Azeris, Arabs, Baluchis and Turkmen, all whom are seeking their rights.There is a sense of betrayal here that the Kurds feel towards Europe and the US for not supporting democracy and minority rights.“European businessmen are coming every day to Iran to make business and deals,” says Hijri. “So that is why [the nuclear deal was] bad for the people in the region, except for the Islamic Republic – no one received any benefits from the deal.”He asks why the West doesn’t care about democracy.“American [policy] looks at today, but doesn’t look at the future. For instance, they had a plan to defeat Saddam [Hussein], but not what to do after.”Hijri is worried that the US has lost its credibility and friends in the region in recent years because it failed to deal well with Syria’s fiveyear- old civil war, allowing Iranian “terrorists” to enter the country to support dictator Bashar Assad.Meeting with the young male and female Kurds training to go to Iran to fight the Ayatollahs revealed passion, and a hope for change in Iran.Whereas women are forced by law to cover their hair by the regime, Kurdish Muslim women in Hijri’s party – many of whom carry AK-47s – wear their hair as they please. They say they want to be able to learn Kurdish in schools, and have equal rights and autonomy from Tehran.