ISIS's motives for the attack are both strategic and ideological.

Egypt launches air strikes on militants they say connected to Sinai attack (REUTERS)
Advertisement
The attack on the crowded al-Rawdah Mosque in the town of Bir al-Abed in Northern Sinai, which was launched during Friday Prayers, killed 305 and injured at least 128 others. Images of the dead and wounded, posted under the hashtag "Rawdah massacre," flooded Arabic social media since the attack. Egyptian officials called it the deadliest terrorist attack in Egypt’s modern history, and some commentators have already called it "Egypt's 9/11." While Egypt, and particularly the Sinai Peninsula, has faced terror attacks by jihadist groups in the past – mainly against security forces and Coptic churches – this attack was different: for the first time, jihadists deliberately targeted Muslim civilians during prayer time in a mosque, killing men, women and children, and opening fire from outside the mosque on those who tried to flee the carnage taking place inside it. 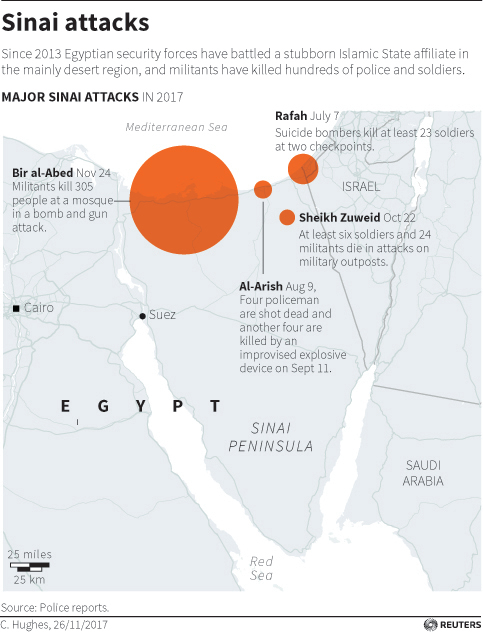 Although it so far hadn't claimed responsibility for the attack, Egypt’s public prosecutor’s office blamed ISIS, stating that the terrorists were carrying the ISIS flag when they opened fire on the mosque. ISIS has been active in the Sinai Peninsula since 2014, when the local salafi-jihadi group Ansar Bayt al-Maqdis pledged allegiance to it and formally joined it as the Islamic State's Wilayat Sinai (Sinai Province). Although Wilayat Sinai isn't the only jihadi group active in Sinai – in mid-November, an old pro-al-Qaida group called Jund al-Islam announced its re-emergence in the area and threatened to "uproot" ISIS presence in the Peninsula – ISIS has both the capability and the motivation to carry out such a bloody attack.But why would ISIS carry out such a horrific attack now, and against this specific location? ISIS's motives for the attack are both strategic and ideological. Strategically, ISIS recently lost all of the territory it once controlled in Iraq: after losing control of Mosul in July and additional territory in Iraq and Syria since then, Iraq's Prime Minister Haider al-Abadi announced on November 21 the formal liberation of the country from ISIS's rule: "We finished Daesh [the Arabic name for ISIS] militarily in Iraq and liberated our towns and cities." But ISIS's motto is of a "remaining" (baqiyya) caliphate which fights all of God's enemies; the loss of territory in the heartland of its state-building project thus only motivates ISIS to strike its enemies outside of Iraq and Syria. As journalist Graeme Wood argued shortly after the Friday attack, "mass murder is how ISIS tries to stay relevant." Such attacks show that the group is still very much alive and powerful, despite its territorial losses in Iraq and Syria and the Sisi regime's determined and brutal counterterrorism campaign against it.In addition to this strategic rationale, ISIS also deliberately targeted a mosque known for its popularity among Sufi worshippers. While Sufism, a mystical form of Islam, has been part of orthodox Islam for centuries and is widely popular in many parts of the Muslim world, Salafi-jihadists view Sufism as heresy and accuse Sufis of polytheism and innovation – both major sins from a salafi-jihadi perspective. ISIS has a well-established record of attacking Sufi shrines in , Iraq and Syria, but it also made clear that it views Sufism in Egypt as a mandatory target for attacks: in an interview from the January 2017 issue of Rumiyah, ISIS's English language magazine, the commander of Wilayat Sinai's Hisbah force (religious police) stated that "our main focus is to wage war against the manifestations of shirk (polytheism) and bid’ah (innovation), including Sufism, sorcery, soothsaying, and grave-worship." The interview also specifically promised to "eradicate" the al-Rawdah Mosque, where the Friday attack took place, "as soon as it conquers the areas hosting" it. As part of this anti-Sufism campaign, ISIS beheaded Sulayman Abu Hiraz, a 100-year old well-known Sufi sheikh whom it accused of "soothsaying" last November. Thus, while the deliberate targeting of non-combatants in a mosque might be new in Sinai, it is consistent with ISIS's policy elsewhere of eradicating Sufism and attacking its followers and places of worship.While ISIS committed the attack as a show of strength, designed to terrify residents in Sinai and embarrass the Sisi regime for its inability to defeat the insurgency in the Peninsula, the attack on a mosque and the unprecedented number of casualties could potentially mark a turning point in Egypt's fight against terrorism. The horrific attack was universally condemned – not only by President Trump, Prime Minister Theresa May and Prime Minister Netanyahu, but also by Ismail Haniyeh, leader of the Political Bureau of Hamas, and the influential Sunni cleric Sheikh Yusuf al-Qaradawi. The universal condemnation of the attack and the public outrage against the perpetrators behind it could mobilize public opinion in Egypt against the jihadists and help the Sisi regime crush Wilayat Sinai and the elements supporting it. While ISIS takes pride in its brutality, the jihadist movement is well aware of the importance of public support for its long-term success and survival: Ayman al-Zawahiri, the current leader of al-Qaida and a long time Egyptian jihadist, warned that "in the absence of popular support, the Islamic mujahed movement would be crushed in the shadows." The horrible attack on Muslim non-combatants in a sacred place of worship on Friday could unite the Egyptian public against ISIS and help the Egyptian security services crush the local branch of the organization.This article written in cooperation with the Forum for Regional Thinking