ISIS blows up historic mosque where 'caliphate' was declared

Destruction of 12th century mosque at end of Ramadan comes amidst ISIS-inspired terror attacks around the world as extremist group loses battle for Mosul.

By SETH J. FRANTZMAN
JUNE 22, 2017 03:24
Islamic State blows up landmark Grand al-Nuri Mosque in Mosul (credit: REUTERS)
Advertisement
A grainy black and white aerial image released Wednesday night showed what Iraqi security forces said was the remains of the Grand al-Nuri Mosque in Mosul where Abu Bakr al-Baghdadi proclaimed the Islamic State caliphate in the summer of 2014.The mosque’s destruction, which Iraq says was done by ISIS as Iraqi security forces closed in on it, is partly symbolic, as well as marking an end to ISIS power in Mosul. It comes nine months after the Iraqi Army and Kurdish Peshmerga launched an offensive to defeat ISIS in an around Mosul, its last major Iraqi stronghold. It also comes as ISIS faces defeat in its Syrian capital of Raqqa.“When I looked out of the window and saw the minaret was no longer there, I felt a part of me had died,” Ahmed Saied, a 54-year-old Iraqi schoolteacher, told Reuters.In late June and early July of 2014, ISIS sought to establish itself as more than just an Islamist extremist group in Iraq and Syria and give itself legitimacy as a “caliphate.” Its leader Abu Bakr al-Baghdadi, who is Iraqi, chose the Grand al-Nuri Mosque, which dates from the 12th century, as a symbol of Sunni Islamic heritage and power in Iraq.The mosque was named for Nur al-Din Zangi, a 12th-century leader who lived during the time of the Crusades. The mosque was known not only for its long history but also because it had a leaning minaret called al-Hadba.Many of ISIS leading crimes, such as the selling of Yazidi women into slavery, destruction of archeology, churches and Yazidi and Shi’ite shrines, were carried out within the city of Mosul and guided by ISIS leaders who recognized the authority of their new caliphate in the summer and fall of 2014. It was to this caliphate that an estimated 50,000 foreign jihadists flocked between 2015 and 2016.In the last two weeks, Iraqi security forces prepared and launched a major operation to clear the last remaining pockets of ISIS control in the Old City of Mosul around the mosque. Since March, the Iraqi security forces, including their elite counterterrorism soldiers and Emergency Response Division, have been within 600 meters of the mosque but unable to push forward into the historic neighborhood around it. 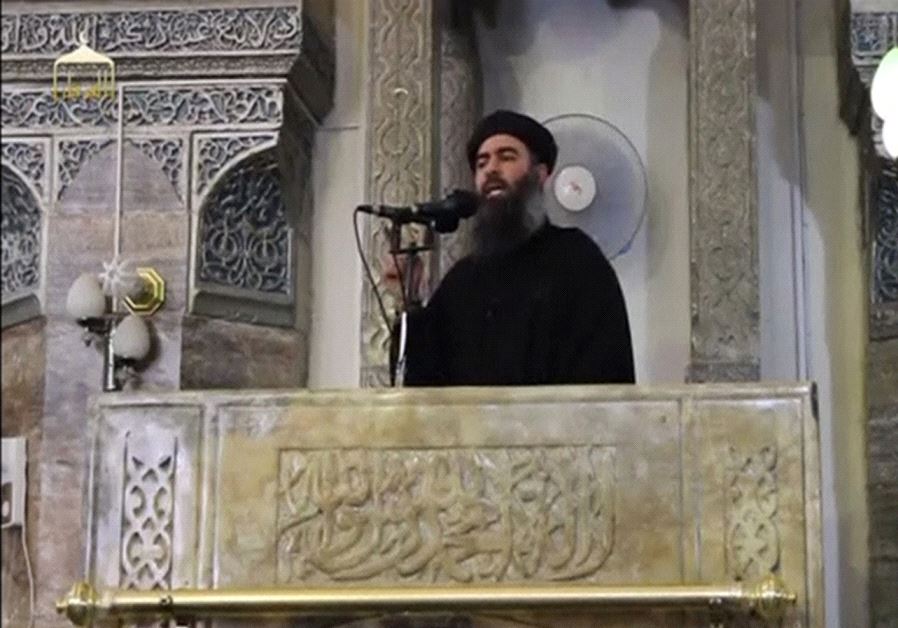 Al-Baghdadi proclaimed himself 'caliph,' or ruler of all Muslims, from the pulpit of the al-Nuri Mosque on July 4, 2014 (credit: REUTERS/SOCIAL MEDIA WEBSITE VIA REUTERS TV)That changed this week as a final offensive was launched to root ISIS out of its network of tunnels and defenses that connect the warren of streets that make up the old town. On Wednesday, as the security forces closed in on the mosque at 11 p.m., Brig.-Gen. Yahya Rasoul told Rudaw TV that ISIS blew up the Hadba minaret and the mosque. He said Iraqi counterterrorism forces were within 50 meters of the site. ISIS was “blowing up history” and committing yet “another crime against humanity.”In a separate statement reported just after midnight Baghdad time, Maj.-Gen. Joseph Martin, commanding general of the Combined Joint Forces Land Component Command of Operation Inherent Resolve, the US-led coalition fighting ISIS, confirmed that ISIS destroyed “one of Mosul’s and Iraq’s great treasures.”The battle to take the mosque and what it represented was often on the lips of Iraqi soldiers in the Mosul battle. Its destruction adds to a long list the number of Iraqi monuments, such as ancient monasteries and UNESCO sites dating back to thousands of years ago, that ISIS vandalized and systematically destroyed.“Many different enemies controlled Mosul over the past 900 years, but none of them dared to destroy the Hadba,” said Ziad, an art student. “By bombing the minaret, they proved they are the worst of all barbarian groups in history.”The evisceration of the mosque, coming in the last days of Ramadan, also symbolically signals the defeat of ISIS in Mosul and to a larger extent will be a moral blow to ISIS in the rest of Iraq and Syria.“The Iraqi security forces are continuing to push into remaining ISIS-held territory,” said US Army Col. Ryan Dillon, spokesman for the US-led international coalition assisting in the Iraqi effort to defeat Islamic State. “There are two square kilometers left in western Mosul before the entire city is liberated,” he told Reuters by phone.ISIS still commands strongholds in Tal Afar and Hawija in Iraq and in portions of the western desert, where the Iranian-backed Hashd al-Shaabi Shi’ite militias are slowly defeating other parts of the “caliphate.” In Syria, the US-backed and Kurdish-led Syrian Democratic Forces are closing in within a few kilometers of defeating ISIS in Raqqa.However, the organization has shifted its operations to Europe and Asia, setting down roots in Afghanistan, the Philippines and encouraging lone-wolf attacks that have taken place in Paris, London, Brussels and elsewhere. Most recently, ISIS took credit for a terrorist attack in Jerusalem that killed police officer Hadas Malka.Reuters contributed to this report.