Fasting month passes in relative quiet among Palestinians as people prepare for return to routine. 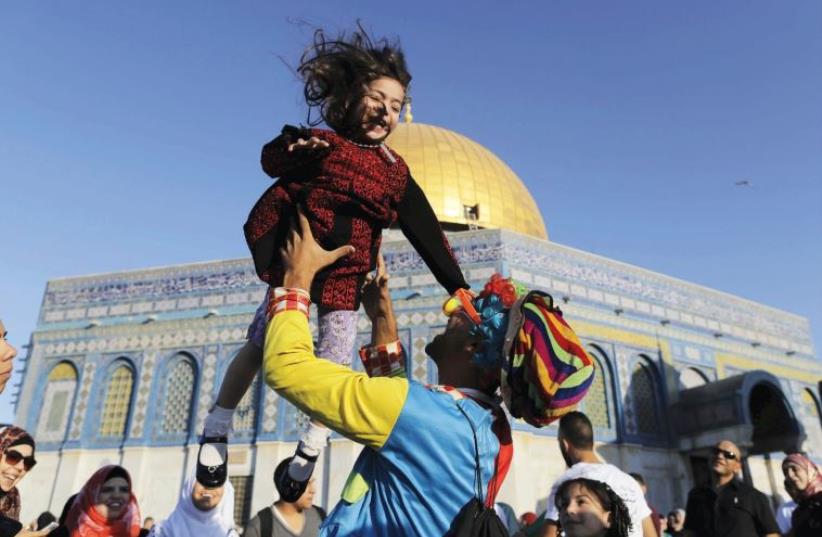 A MAN DRESSED as a clown plays with a girl on Friday, Id al-Fitr, near the Dome of the Rock on Jerusalem’s Temple Mount
(photo credit: REUTERS)
Advertisement
“I’d invite you over but my wife is asleep.” It was noon in El-Bireh, the city that adjoins Ramallah, and Munther was giving us a tour of his neighborhood.“People think you lose weight over the month because of the fast, but everyone I know got fatter,” he said.It is a common refrain across Palestinian Muslim communities as Ramadan wrapped up on Thursday.The shops were closed on Friday in the Beit Hanina neighborhood of northeastern Jerusalem. People had mostly gone to visit their families for Id al-Fitr, the holiday that ends the month of fasting.“I didn’t fast this year,” said Sawsan, a 28-year-old woman from Beit Hanina. “My mom traveled this year during the holiday, so it felt like our family couldn’t sit together as usual. Today we are gathering with our family for break fast, and then a big lunch. My dad and male relatives will travel around to visit other parts of our large family and give presents for the Id.” She was in a hurry. “I’ve got to go to a pedicure and laser today ’cause I’m leaving for the North tomorrow.”Unlike last year, when Ramadan fell in the midst of the Gaza war and the tension in Jerusalem was palpable after the brutal murder of teenager Muhammad Abu Khdeir, this year it finished on a quiet note.This year the month of fasting began on June 18. There were fears that an uptick in terrorist attacks would spread during the month. On June 29, Danny Gonen, a 25-year old from Lod, was shot and killed and his friend wounded while visiting Ein Buvin spring near Dolev, a Jewish community near Ramallah. On June 30, another Israeli was killed and three wounded in a driveby shooting near Shiloh in the West Bank.In Jerusalem, tensions rose after an IDF commander shot 17-year-old Hani al-Ksabeh in the city’s north. Ksabah, a resident of the Kalandia refugee camp, was killed after allegedly throwing stones at the IDF officer’s car; subsequent video seemed to indicate he was running away when he was shot.But it was a far cry from last year when nightly riots shut down parts of east Jerusalem and riot police patrolled the streets of Beit Hanina and other areas. Police spokesman Micky Rosenfeld told The Jerusalem Post that the month has been quieter than last year.“There was an increase in incidents in the last weeks in some neighborhoods, such as the Jebl Mukaber area, Wadi Joz, Silwan and Mount of Olives.In those places police responded to stones thrown at vehicles and a number of Molotov cocktails; as a result security measures have been implemented and assessments made and an increase in patrols [put in place].” But it was “absolutely quieter” than the year before.That relative quiet was in evidence on Laylat al-Qadr, this past Monday, when more than 200,000 Muslim pilgrims arrived in Jerusalem to celebrate the “Night of power” when Muslims believe the first verses of the Koran were revealed to the Prophet Muhammad. More than 3,500 police were deployed in Jerusalem and roads were shut down, but worshipers streamed seamlessly into the Old City. Men with traditional white kanduras from the Gulf Arab states mixed with men wearing the more Egyptian style galabiya or long gowns.African pilgrims from Nigeria mixed with Palestinians from Hebron and Ramallah. So many people received permits to enter Israel from the West Bank that some who spoke to the Post said they didn’t even take advantage of them. “I had a permit but preferred to stay with my family in Bethlehem and work in Jericho,” said one man who works in the Palestinian Authority security forces.Nivin Julani from Jerusalem, who works in Ramallah, said she felt it passed quickly.“It wasn’t very hard [in terms of fasting and other obligations], but from my view and my friends, it didn’t feel it was holy like most years. I didn’t feel the atmosphere of Ramadan.It is about getting closer to God and praying, but we didn’t feel holiness.” She felt that one positive aspect this year was that many could attend prayers in al-Aksa in Jerusalem. “Last year it was dangerous because of the war.”While some will miss the traditional sweets and binge eating that great the end of the fast every day, many are happy to get back to a normal workday and a normal diet. “I felt pressured to fast, but I don’t feel the holiness,” was a refrain among some young people who are secular but feel the social pressures of the month encourage nominal religious observance. Many more pious people who refrained from smoking, swimming and other activities also said they were happy to get back to a normal life and schedule.Others who got used to staying up most of the night to eat suhoor, the pre-dawn meal, and make the fajr, or dawn, prayer at 4 a.m., said they enjoyed the time with family and observing tradition, but after a month it will be difficult to adjust their routine.

Tags eid in israel
Advertisement
Subscribe for our daily newsletter