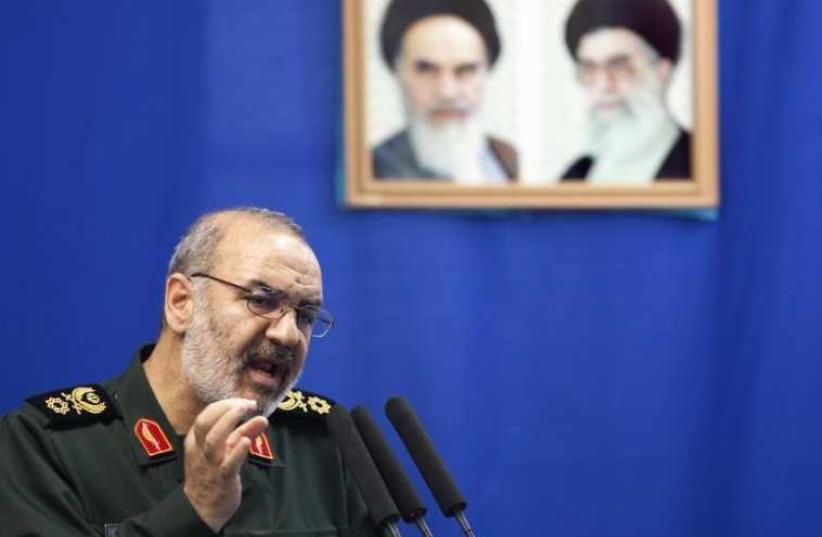 Hossein Salami, deputy head of Iran's Revolutionary Guard
(photo credit: REUTERS)
Advertisement
Lieutenant Commander of the Iranian Revolutionary Guards Corps Brigadier General Hossein Salami announced on Tuesday that newly developed Iranian drone technology has the capability to fly 3,000 kilometers for reconnaissance and combat missions.  "The IRGC has a drone that has a flying range of 3,000 km round-trip and is capable of conducting reconnaissance and combat missions," Salami said in an interview with the state-run TV on Tuesday night, Iran's Fars news Agency reported on Wednesday. "We also have a unique ballistic missile that no one else, but perhaps Russia and the US, has; and intercepting this missile is almost impossible," Salami added. The report quoted Salami as saying that, "Any US airbase whose airplanes can reach the Iranian airspace as well as their aircraft carriers can be targeted by Iran's unique high precision striking ballistic missiles and drones."  In April a US Army report said Iran is building a fleet of so-called “suicide kamikaze drones,” and providing know-how on assembling these new weapons to its terrorist allies Hamas in the Gaza Strip and Hezbollah in Lebanon.The report, which was cited by The Washington Times and published by the US Army’s Foreign Military Studies Office at Fort Leavenworth, Kansas, states that “no aspect of Iran’s overt military program has seen as much development over the past decade as Iranian unmanned aerial vehicles (UAVs).“Whereas a decade ago Iran’s UAVs and drones were largely for show, a platform with little if any capability, the Iranian military today boasts widespread use of drones, employed not only by the Islamic Revolutionary Guard Corps (IRGC), but also by the regular army, both regular and IRGC navy, and the regular and IRGC air forces,” it continues.Both Hamas and Hezbollah have deployed drones that have penetrated Israeli airspace. Thus far, they have not caused damage.“In a mid-February speech, regular army General Abdolrahim Moussavi outlined the [Iranian] army’s growing use of drones, with emphasis on suicide or kamikaze drones,” according to the US Army report.“While it is easy to dismiss the idea of a suicide drone as more symbolic than real in an age of cruise missiles and precise Predators, utilizing suicide drones is an asymmetric strategy which both allows Iran to compete on an uneven playing field and poses a risk by allowing operators to pick and choose targets of opportunity over a drone’s multi-hour flight duration,” the report noted.