Saudi cleric on TV: Treachery courses through the veins of the Jews like blood 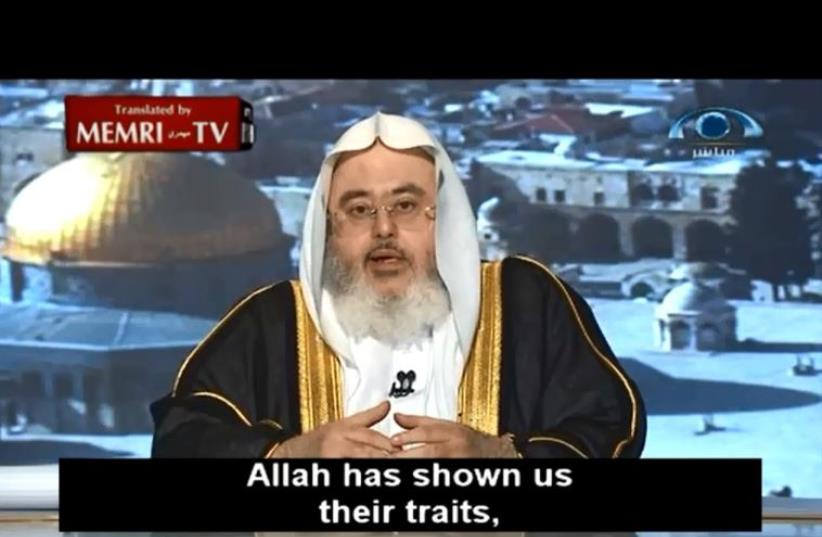 Saudi Cleric Muhammad Al-Munajid
(photo credit: MEMRI)
Advertisement
A Saudi cleric voiced viral anti-Semitism in a recent TV interview, saying that the Jews are arrogant people who had implemented The Protocols of the Elders of Zion.“Treachery courses through the veins [of the Jews] like blood,” said Sheikh Muhammad al-Munajid, according to the video of the interview posted by MEMRI (the Middle East Media Research Institute) on Sunday.The Protocols of the Elder of Zion is an old forgery meant to demonstrate that Jews are evil and are seeking to take over the world.Russian secret police based in Paris are believed to be behind the forgery that first appeared around 1895.The host of the interview commented, “The Jews are today’s plague, a malignant disease,” in the show aired on the Saudi Almajd TV channel on November 27, 2015.  The host continued to accuse the Jews of having a “black” history and stories “stained with bloodshed.”Munajid then said, “The Jews are at the top of the list of enemies. The Jews of today are the same as the Jews of yesterday,” going on to add, “Allah has shown us their traits.”He explained that the prophet Muhammad said, “Our battle with them will continue until the end of time.”The sheikh added that according to Judaism, non-Jews are considered impure like pigs. “This appears word for word in their false Torah.”Munajid also said that Jews are allowed to rape non-Jewish women as “it appears in their scriptures.”“I don’t have anything personal against the Jews. Not at all,” said the Saudi cleric, adding, “Our hatred of them stems from their having cursed Allah.”He also falsely asserted that Jews are polytheists according to the Talmud – “They say that the rabbis are the masters of God.”The host then asked about Muslims that have lived alongside Jews in the West or in Palestine and what Shari’a has to say about coexistence with them.Munajid responded that they first call on Jews to convert to Islam, but if they would live as dhimmi [status for ‘people of the book,’ such as Jews and Christians] and pay the poll tax as a protected minority under Muslim sovereignty, then “It would have been impermissible for us to do them an injustice or to harm them.”