Who controls what in Syria?

By REUTERS
Syria areas of control - map
(photo credit: REUTERS)
Advertisement
BEIRUT - Early in the conflict, fighting splintered Syria into a complex patchwork of areas held by rival groups, but fighting in recent years has simplified the frontlines and the country is now split into only a few zones of control.GOVERNMENT-HELD TERRITORYAt its weakest point in 2015, the President Bashar al-Assad's government held less than a fifth of Syria.But since Russia entered the war on its side, it has reclaimed huge swathes of the country, controlling more than half of the area, including its most populous areas, the main cities, the coast, the border with Lebanon, and most of the border with Jordan, as well as the central Syrian desert and the main gas fields.REBELS1) IDLIB

Rebel groups unsupported by a direct foreign military presence now hold only the northwestern area that comprises most of Idlib province and adjacent small parts of Latakia, Hama and Aleppo provinces.The dominant faction is Tahrir al-Sham, a jihadist alliance spearheaded by al Qaeda's former official Syrian affiliate, previously known as the Nusra Front, and deemed a terrorist group by the United Nations, United States and Turkey. 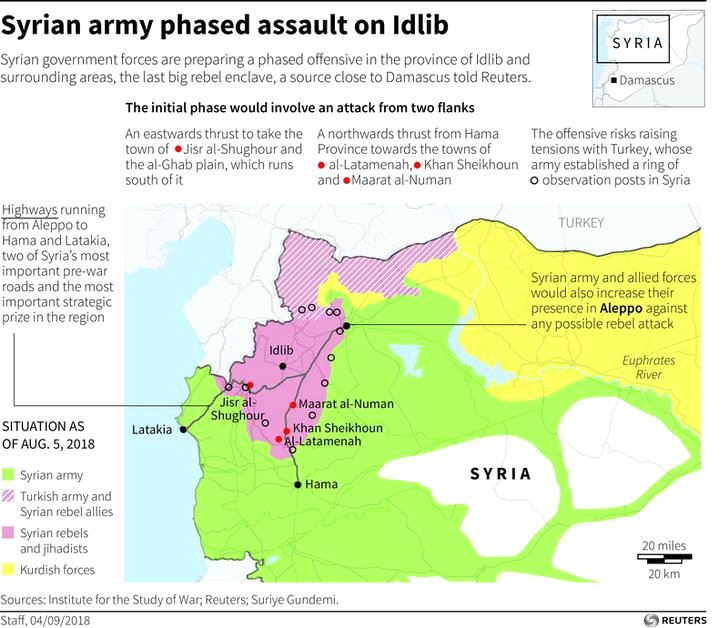 Syrian government forces are preparing a phased offensive in the province of Idlib and surrounding areas - map (REUTERS PHOTOGRAPHER)Turkey has also brought several of the other major rebel groups together into a rival alliance, the National Liberation Front.The area, which borders Turkey, is home to about 3 million people, half of whom have already fled their homes elsewhere according to the United Nations.They include more than half a million people from other rebel enclaves who chose to be bussed there under surrender deals in recent years rather than go back under Assad's rule.Turkey, Russia and Iran agreed a year ago to make Idlib a "de-escalation zone" to reduce fighting, but the terms were never made public and the deal did not include the jihadist groups.The Turkish army has posted a string of observation posts along the front line between rebel and government forces.2) TURKEY-BACKED REBEL TERRITORYTurkey staged incursions into Syria in 2016 and 2018 in support of Syrian rebel groups, building an arc of territory along the border from Afrin in the west, where it meets the rebel zone in Idlib, to the Euphrates in the east.Turkey has helped those rebels form a local administration and police force, set up schools and hospitals and has installed branches of its own postal system and other public services.Although the groups it backs in the area are opposed to Assad, they have not directly fought the government since Turkey launched its incursions.Like Idlib, it has also been a destination for fighters and civilians from other rebel enclaves that were surrendered to the government, including eastern Ghouta.Kurdish groups have accused Turkey and the rebels of a policy of resettling people from other parts of Syria into homes seized from Kurds who fled the Turkish incursion into Afrin in February. Turkey and the rebels deny that.3) REBELS AND US FORCES AT TANFThe United States military set up a base at Tanf in 2016, deep in the desert close to the borders with Jordan and Iraq, with the Maghawir al-Thawra rebel group.The base lies close to the Damascus-Baghdad highway, a major strategic prize for Assad, and the U.S. military has maintained a wide perimeter around it, striking at any force that attempts to move down the road or towards the base.SYRIAN DEMOCRATIC FORCES AND THEIR ALLIESThe Kurdish-led Peoples Protection Units (YPG) took control of large areas of northeast Syria in 2012 as government forces pulled out to fight rebels in the west.As Islamic State advanced in 2014, the YPG joined other groups to hold them back, supported by the United States.They formed the Syrian Democratic Forces (SDF) alliance of Kurdish and Arab militias, backed by the US and its allies.The SDF now controls almost all the quarter of Syria east of the Euphrates, including the former IS capital of Raqqa and some of the country's biggest oil fields.It also took the area around Manbij, west of the Euphrates, in 2016. That area is a big point of friction with Turkey, which sees the YPG and SDF as projections of the Kurdish PKK group it is fighting at home.Manbij is under the control of a local militia that is affiliated with the SDF, and is the subject of Turkish-US talks.ISLAMIC STATEThe group at one staged controlled most of eastern Syria, but in 2016 and 2017 rival campaigns by the government and the US-backed SDF took almost all its territory.It now holds a small strip along the northern bank of the Euphrates near the Iraqi border and a couple of patches of desert in central Syria.But it has shown an ability to stage sudden guerrilla attacks despite losing its so-called caliphate.