"Edgar came from the lions – fearless, hopeful and a born leader of our people and a spokesperson for justice,” says President Shimon Peres.

By DANIEL KLEO GIOSUÈ EISENBUD
Matthew Bronfman pays homage to his late father, Edgar, in Jerusalem.
(photo credit: MARC ISRAEL SELLEM/THE JERUSALEM POST)
Advertisement
“We are celebrating a larger-than-life public figure, and my dad. Just my dad,” industrialist and Jewish leader Matthew Bronfman said of his late father, world-renowned Jewish rights advocate Edgar M. Bronfman.The younger Bronfman was addressing a cavalcade of political and social luminaries who had gathered at the Israel Museum Thursday evening to honor his legendary father, who died in December at the age of 84.“I’m incredibly proud to continue some of the work my father did,” he continued. “My dad was, and always will be, my hero, and I miss him very much.”A cross-section of leaders from around the globe whose lives the elder Bronfman had indelibly touched expressed an outpouring of appreciation and respect for the longest-serving leader of the Jewish Congress and billionaire Seagram’s head.“It’s mission impossible to sum up the life Edgar had,” said Knesset Speaker Yuli Edelstein, whom Bronfman was instrumental in freeing from a Siberian prison in 1987. “Thousands would not be standing in Israel if it was not for the efforts and deep lifelong commitment of Edward M. Bronfman.”In a video message, President Shimon Peres described Bronfman as a “lion.”“He was fearless, hopeful and a born leader of our people and a spokesperson for justice,” said Peres. “He went from country to country, from leader to leader, to say they must fight anti-Semitism.”Although Bronfman was known for his tremendous wealth, Peres said his enduring value was his humanity.“We shall miss him as a great person,” the president continued.“His real wealth was not necessarily money, but service to his people. May God bless his memory.”In another videotaped message, former US secretary of state and likely 2016 presidential hopeful Hillary Clinton described Bronfman as a “champion for social justice and human dignity.” 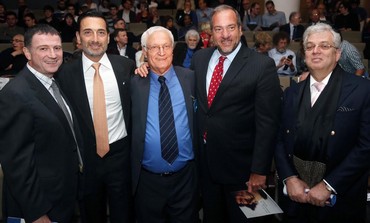 AT THE memorial tribute to Edgar Bronfman at the Israel Museum in Jerusalem last night (from left) are Knesset Speaker Yuli Edelstein, Matthew Bronfman, Chaim Chesler, Rabbi Yechiel Eckstein and Aaron Frenkel, president of Limmud FSU. (Marc Israel Sellem/The Jerusalem Post)Moderating the event – which was organized jointly by Limmud FSU, Hillel Israel and the Bronfman Youth Fellowships – were Jerusalem Post Editor-in-Chief Steve Linde and Channel 2 presenter Dana Somberg, a graduate of the Bronfman Youth Fellowships.“Edgar Bronfman was one of the major personalities who helped to open the gates for Soviet Jewry,” said Limmud FSU founder Chaim Chesler, one of the organizers, who has worked closely with the younger Bronfman to reconnect Jews from the former Soviet Union with their Jewish roots.“It is because of the Bronfmans that Russian-speaking Jews will be close to their heritage for generations to come. We owe him a debt that cannot be repaid,” he said.Among the guests were Limmud FSU president Aaron Frenkel; Dana Raucher, executive director of the Samuel Bronfman Foundation; Hillel Israel founder Yosef Ciechanover; Dr. Joseph Bachar, the board chairman of Bank Discount; Shalom Fisher of Ikea Israel; and Rabbi Yechiel Eckstein, founder and president of the International Fellowship of Christians and Jews.Avraham Infeld, president emeritus of Hillel International, said the most profound lesson the late leader had taught him was the importance of maintaining a strong connection to the past.“To impact the future, you must first link to your past,” Infeld said. “That is how to create something of deep value, which Edgar did. That is the lesson I learned from my wonderful mentor.”Meanwhile, Opposition leader Isaac Hertzog compared Bronfman to the legendary Sir Moses Haim Montefiore, adding that politicians of all stripes can agree on his enduring and invaluable contributions to the Jewish world.“There are very few people you can describe as the Moses Montefiore of his generation – Edgar M. Bronfman is one,” he said.  “We are all extremely grateful for his service to the State of Israel, and even though members [of very different political parties] spoke here tonight, there is a national consensus on Edgar. May he rest in peace.”