A family of three is dead, one woman remains in critical condition and a gas technician is under arrest following a massive explosion that ravaged a Jerusalem apartment minutes after the technician reportedly claimed he fixed a leak early Monday morning.

Parents Avraham and Galit Tufan, ages 56 and 42, respectively, and their two-year-old son, Yosef Chaim, were killed instantly by a 1 a.m. blast so powerful it shattered the windows of several cars parked 50 meters across the street from their third-floor Gilo home.An unidentified 50-year-old female resident of the building remained in critical condition at Hadassah University Medical Center in Ein Kerem following emergency surgery, a hospital official said Monday night.Stunned families forced to evacuate the complex huddled outside the building together Monday morning with expressions of shock, as camera crews and passersby took in the scene. Rubble from the cordoned- off site could be seen from the sidewalk as police stood guard and a cleanup crew removed debris into a nearby dumpster.The mother and father of a family of five living directly below the destroyed apartment anxiously paced the sidewalk with their three young children.

The hospital had discharged their 13-year-old daughter an hour earlier after treating her for facial cuts from a shattered bedroom window.

“We were sleeping when the explosion in the apartment above us went off, and all of our windows shattered and our ceiling began to collapse,” said the mother, who asked that her family name not be published.“Our first thought was that it was a missile,” she continued.“There was no shouting above us because the family was dead. I was the only one shouting.”
Photo: Magen David Adom
The woman said she did not understand what transpired until she evacuated the apartment with her husband, twin 10-year-old sons and daughter as their ceiling began to slowly collapse.“The damage is very serious,” she said as her husband nervously fielded phone calls from concerned family and friends a few meters down the street. His forehead was visibly cut in several places, apparently from shards of glass.“We’re still waiting to go inside,” she added as her daughter stood by her side, the left side of her face bearing cuts from the explosion.Her frightened sons paced back and forth, still wearing their pajamas.“I think I will need a psychologist to treat my children because they will not be able to sleep here anymore,” the mother said. “They’ll no longer trust that it is safe here.”Ofer Levy, who lives with his wife, mother-in-law and young son on the second floor, maintained a ladder to his balcony as workmen replaced shattered windows throughout his apartment.“I thought it was a terrorist attack because the impact was so powerful. It sounded like Hiroshima. It wasn’t like a split second – it was four or five seconds. The windows and [metal] bars just flew out of place,” said Levy.“I first went to my son’s room to make sure he was okay, got my wife and motherin- law, and just got everyone out of there as soon as I could because I was afraid there would be another explosion.”Approximately 20 minutes later, Levy said, he realized that the blast had been the result of a gas explosion.“I knew what happened because everyone outside said they heard about the gas leak in the building yesterday,” he said.That gas leak, police said, was reported two times to the Supergas company within a three-hour time frame by residents of the apartment whose tank exploded.According to police spokesman Micky Rosenfeld, the gas company sent a technician to the home at 10 p.m. and 1 a.m. to fix the leak.“The explosion happened shortly after the technician left the second time,” said Rosenfeld.“It happened in the apartment adjacent to the family that was killed, but the force of the blast went directly through their apartment.”Hundreds of calls flooded police emergency lines immediately after the explosion, Rosenfeld said, and police, firefighter and Magen David Adom units arrived at the scene within minutes to search for victims.“There was a tremendous amount of damage and we searched every apartment from top to bottom to ensure safety, care for the wounded and locate those killed,” he said. “Tragically, the impact of the blast killed the parents living next door and their baby.” 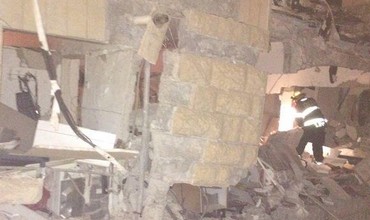 At least seven people were treated at the scene for injuries, including the woman who remains in critical condition and a man who sustained moderate injuries. Four others sustained light injuries; they were treated and released from the hospital.

Rosenfeld said the gas technician who left the scene moments before the explosion was arrested hours later and arraigned at the Jerusalem Magistrate’s Court Monday morning. He will remain in custody until Wednesday, at which point he will appear again before the court, the spokesman said.“This is a very serious investigation that involves the police, fire department, gas company and Jerusalem Municipality to determine what happened in this disaster,” Rosenfeld said.According to second-floor tenant Levy, the technician claimed the apartment would be safe for the night and said he would return later in the morning to finish his work. He added that the Tufans were relatively new to the building, having rented the apartment from its owner.“I didn’t know them well but knew they had waited a long time to have their baby,” he said.Levy said the building utilized a solar energy system seven years ago but that it had been switched to gas because of high costs and a malfunctioning heater.“I’m still worried because I don’t think the gas installation system was installed in a professional way,” he said.Despite his misgivings, Levy said he would stay with his family at the apartment Monday night.“We’re not used to this kind of thing,” he added.Shortly after the explosion, the municipality’s Emergency and Security Department was dispatched to the site to provide assistance to the building’s residents, many of whom were evacuated to nearby hotels. Mayor Nir Barkat also arrived at the scene.The Knesset Economic Affairs Committee released a statement Monday afternoon saying that it would hold a special meeting Wednesday morning to discuss safety protocols for the use of gas in homes.“Committee chairman MK Prof. Avishay Braverman will examine the steps taken by the gas companies to ensure proper gas supply and examine the monitoring of gas companies in order to make sure every effort is made to prevent the recurrence of similar incidents,” the statement read.The Energy, Water and National Infrastructure Ministry released a terse statement regarding the explosion, stating that “officials are working with the police on a professional level.”Meanwhile, Supergas officials said the company was cooperating with police during their investigation, adding that the building’s gas system had routinely been inspected as required by law and was deemed to be in satisfactory condition during the last inspection.“According to the law, a test of the building’s main gas system is required every five years,” a company statement read. “In [this] building a test was conducted in September 2012, and the system was found to be in order.”As of Monday night, Rosenfeld said he was unaware of funeral arrangements for the Tufan family.Sharon Udasin contributed to this report.
Advertisement
Hot Opinion