Ann Coulter posts a series of what could be seen as anti-Semitic tweets online during the GOP debate. 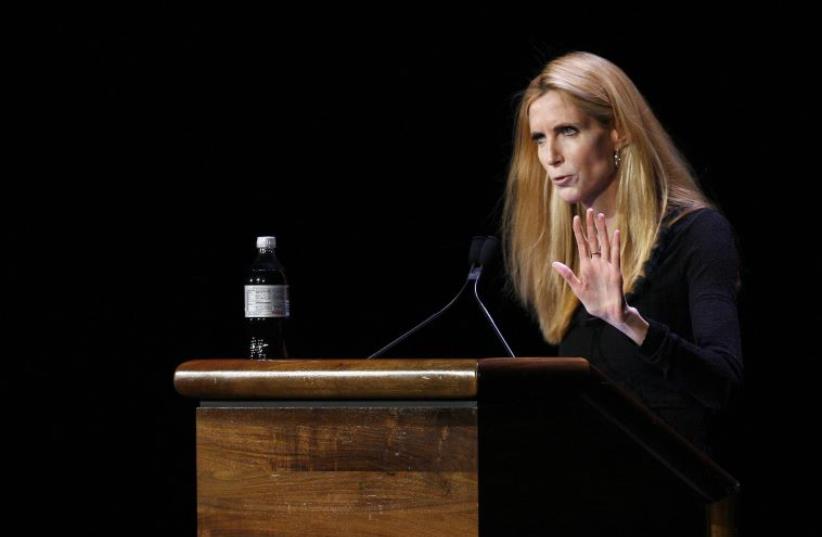 Ann Coulter
(photo credit: REUTERS)
Advertisement
Ann Coulter, a controversial conservative political commentator, posted a series of what could be viewed as anti-Semitic tweets during the Republican presidential national debate on Wednesday night. “How many f—ing Jews do these people think there are in the United States?” Coulter said on Twitter during the final minutes of the three-hour debate Wednesday evening, when four of eleven candidates mentioned their support for Israel in their closing remarks.

How many f---ing Jews do these people think there are in the United States?
— Ann Coulter (@AnnCoulter) September 17, 2015

The four candidates were former Arkansas Gov. Mike Huckabee, Sen. Ted Cruz, R-Texas, who said he would move the US embassy to Jerusalem as one of his first acts as president, Sen. Marco Rubio, R-Fla., and New Jersey Gov. Chris Christie.The backlash was instantaneous. Followers accused Coulter of being "anti-Semitic," and "desperate for attention," calling her statement "f---ing offensive." Several followers mentioned they believed her account had been hacked while others suggested she was drunk after playing a drinking game while viewing the debate.

Looks like someone's desperate for attention... "@AnnCoulter: How many f---ing Jews do these people think there are in the United States?”
— Elizabeth Chang (@ElizabethGChang) September 17, 2015

Coulter immediately went on the defensive in the face of the backlash tweeting, "I like the Jews, I like fetuses, I like Reagan. Didn't need to hear applause lines about them all night."

Christians United for Israel excoriated Coulter in a statement.“Ann Coulter’s tweets this evening concerning Israel were completely inappropriate,” spokesman Ari Morgenstern said in a statement. “The US-Israel relationship is both a moral and strategic imperative. There are tens of millions of Christians in this country who stand with the Jewish state.”The Anti-Defamation League also weighed in on Coulter's remarks, deriding the series of tweets the conservative firebrand sent during the Republican debate as “ugly, spiteful and borderline anti-Semitic.”Jonathan A. Greenblatt, ADL National Director, also issued a statement blasting the best-selling author, saying that "While most of America has rightly tuned out Ann Coulter’s hyperbolic and hateful rhetoric, her irresponsible tweets during the Republican presidential candidate’s debate are truly a new low and must be called out." Greenblatt went on to say that  "Ms. Coulter is pandering to the basest of her base," adding "All decent Americans should reject Ms. Coulter’s rhetoric as simply beyond the pale."The United States of America is home to approximately 6.8 million Jews. Coulter is a supporter of Donald Trump for president.