News briefs from around the country. 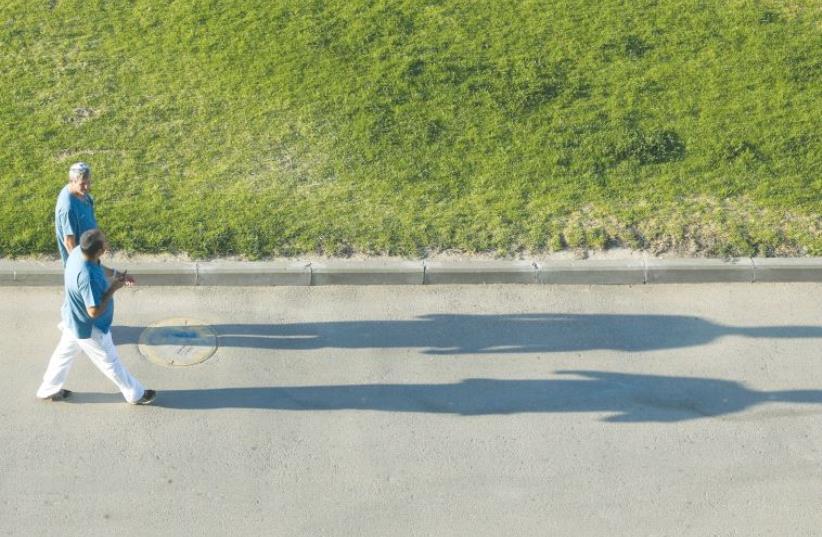 Medical staff walk on the campus of Beersheba’s Soroka University Medical Center
(photo credit: MARC ISRAEL SELLEM)
Advertisement
■ FIRE SEEMS to follow celebrity chef Moshe Segev. Only two months after his Herzliya restaurant, Segev Art, burned down, another fire broke out in his Tel Aviv restaurant, Segev Express, in Ramat Hahayal last Friday. It was subsequently determined that the blaze was due to a fault in the oven, as had also been the case with the fire in Herzliya. Fortunately, no one was hurt and diners were quickly evacuated. The fire caused considerable damage to the premises, which have been closed for renovations until further notice.Segev advised Facebook friends that he would update them as soon as the restaurant would once more become operational.Segev has not been left without an income. He is the executive chef for El Al Airlines and the creator of in-flight menus.
■ WHILE SOME practitioners of the oldest profession candidly admit that they like turning tricks, the overwhelming majority hate it, but were forced into it by economic circumstance, a greedy, insensitive overbearing boyfriend, or a criminal who lured them to Israel with false promises of respectable jobs, then took away their passports, threatened to kill their children and/or the aging parents they left behind, and young women – mostly Russian – have little choice but to obey. Some women get physically and psychologically sick from having as many as a dozen customers or more in one night. The money they make isn’t worth the degradation.A year ago, a prostitute who went by the name of Jessica and who had been in the business for 15 years, with no means of extricating herself, committed suicide simply because she couldn’t take it any more.There’s terrific camaraderie among prostitutes. When Jessica killed herself near the Tel Aviv brothel where she had suffered untold humiliations, her colleagues used social media to ask the public to come to a protest demonstration outside the brothel. Police were willing to permit the demonstration to take place in the same street, but not outside the place in which Jessica and some of the other women present had been forced to work.Many people – men and women – responded to the protest call. MKs were present to make speeches about rehabilitating the members of the oldest profession, and police closed the brothel for 30 days. There were Knesset sessions on prostitution afterward, with ladies of the night invited to come and tell their stories and to make comments.But the brothel is still operating, and Reuma Schlesinger, who coordinates the struggle to rehabilitate prostitutes and to find them honorable, dignified jobs, doesn’t hold high hopes where the government is concerned. It’s only a matter of time, she believes, as do the prostitutes whom she is trying to help, before another Jessica takes the same desperate step out of the business.To mark the first anniversary of Jessica’s death, prostitutes and people who care about the welfare of prostitutes gathered last week at the site where she committed suicide.
■ ABIGAIL LEIBOWITZ and her twin brother were born prematurely at Sheba Medical Center, Tel Hashomer, 14 years ago. Each weighed 1.5 kilos and their chances of survival were minimal. They were kept in the neonatal intensive care unit for 11 months, after which their parents, Hagit and Shamai, took them to the US, where they have remained ever since, living in Springfield, Maryland.Two years ago, Abigail decided that she wanted to do something special for her bat mitzva. She made jewelry and sold it with the aim of raising money for the neonatal unit in which she and her brother had spent the first 11 months of their lives. She raised $700, and this month, when her family came to Israel on vacation, she visited the hospital to present her donation. It was important to her to do a charitable deed within the period of her transition from childhood to adolescence and womanhood, she said, and she could think of nothing better than to raise money for the unit that had saved her life.Dr. Tzipi Strauss, the head of the neonatal department, was delighted to see her, saying that every premature baby that is cared for in the unit touches the hearts of nurses and doctors alike, and that it was pure joy to see them grow up.
■ AT SOROKA University Medical Center, Beersheba, 12-year-old Rivka Sack of New York donated all the money she had received on the occasion of her bat mitzva celebration toward the purchase of equipment that would upgrade eye surgery. Sack, who was vision impaired and close to blind, had her sight restored with the help of new technologies, and she is keen for other children with a similar impairment, especially those in the Negev, to be able see again in the same way. Rivka’s three older sisters also gave away their bat mitzva money.