A hundred and twenty- eight years after her death, she is still an inspiration. 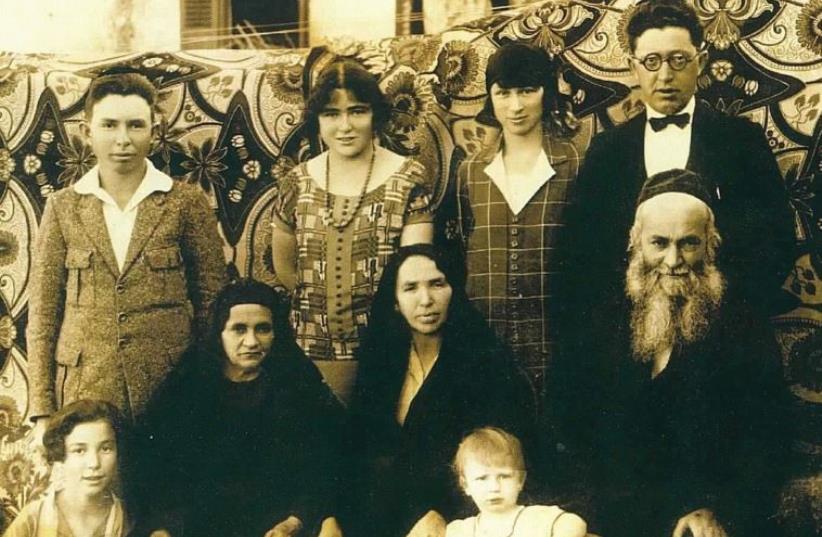 The Slonim family, descendants of Menuha Rochel, before the 1929 Hebron Massacre
(photo credit: JEWISH COMMUNITY OF HEBRON)
Advertisement
A lost map, a tense security situation and, of course, hassidic song and dance accompanied the annual visit to the grave of the only Chabad personality buried in Israel.Rabbi Danny and Batsheva Cohen consider it an honor to have a daughter in Hebron named Menuha Rochel. To date she is the first and only person in Hebron named after the famous matriarch who for 43 years served the Jewish community of Hebron.The Cohens are a husband-and- wife team that head Chabad of Hebron, and live in the same building where Menuha Rochel did much of the same job in the mid to late 19th century. It is the first Chabad house in Israel and the first outside Europe.Most people know Chabad for its outreach programs pioneered by the seventh Lubavitcher Rebbe, Rabbi Menachem Mendel Schneerson of Crown Heights, New York. But in the 19th century, the movement was still centered in Russia and Ukraine.Menuha Rochel, the granddaughter of the first Lubavitcher Rebbe, and daughter of the second, had always wanted to live in Israel. A hundred and twenty- eight years after her death, she is still an inspiration, as about 200 people visited her grave on Wednesday of last week – 24 Shvat, her yahrzeit – followed by a festive gathering and speeches by descendants.In addition, an important map that had been missing for a long time was rediscovered. It provides significant information and clues about the history of the ancient cemetery where she is buried.The “Bubbie” of HebronMenuha Rochel Slonim was born on 19 Kislev, in 1798, the same day that her grandfather was released from prison by the Czarist Russian authorities. Her name, meaning “tranquility” reflects this fact. It is said she always wanted to live in Israel, and in the year 1845, she and her husband, a descendant of Rabbi Moses Isserles, the famous rabbi known as the REMA, made Hebron their home.On the day of her departure, it was raining heavily and she contemplated pushing off the trip. But the Rebbe blessed her that she would “walk between the raindrops.” And throughout her life it seems that she did, as a wide mix of people sought her advice and blessings, both Sephardi and Ashkenazi as well as the neighboring Arabs.Menuha Rochel became a matriarch of the community and helped invigorate the Jewish quarter. Her descendants later became community leaders in the city.Woman of miracles Rabbi Cohen speaks fondly of the “bubbie” of Hebron that he never met. He relates one story that appears in chronicles of Chabad history.“There was a pasha [Ottoman official] who was particularly heavy-handed against the Jewish community. He was in charge of taxing the Jews. One day, his daughter became ill, and no doctors or experts could seem to help her. Someone suggested to the pasha that he seek the blessing of the venerated Menuha Rochel.So reluctantly, he asked for her help. But Menuha Rochel made her blessing conditional on his lifting the unfair persecution he had imposed on the community.When he agreed, she gave her blessing. His daughter regained her health, and the Jewish community rejoiced.”This is just one of the many miracle stories attributed to Menuha Rochel.

The security situation Cohen related that because of the tense security situation, this year’s memorial service almost didn’t happen.Just a month earlier, one of the local gardeners, Genadi Kaufman was murdered by a terrorist. It was the latest in a series of stabbings and shooting incidents that have plagued the entire country.“It looked like we would barely get a minyan at first,” Cohen said, “but we launched a campaign within the Chabad community and people responded.”In the end, the reception hall at the Gutnick Center in Hebron was packed. Buses arrived from Jerusalem, Kiryat Malachi, Beersheba, Rehovot and throughout the country. Among the speakers were Sarah Nachshon, one of the founders of the present-day community who spoke at length of the trials and tribulations of repatriating the Jewish residents, and Rabbi Zev Dan Slonim, a decendant of Menuha Rochel and currently the rabbi of the historic Nahalat Ya’acov synagogue in downtown Jerusalem.The head of the central Chabad rabbinical court in Israel and other important figures spoke as well followed by a festive meal, and the dancing and singing that characterize hassidic functions.The ancient cemeteryThe cemetery where Menuha Rochel is buried merits a fulllength article on its own.Located on the border of Jewish Hebron, the lonely stretch of green grass overlooks the massively built-up Arab Hebron, with its shopping centers university, hospital and even a Kentucky Fried Chicken. The economic center is in stark contrast to the desolate cemetery, which has seen better days. Only a few unmarked tombstones are still visible, most of them having been ripped up and destroyed by the Jordanians, who turned the area into a vegetable patch.The grave of Menuha Rochel was one of the few that was correctly identified in the mid- 1970s. In the 1980s, at the initiative of the Lubavitcher Rebbe, the area was refurbished and cleaned up and a platform was built over the grave.At the memorial service, people crowded next to the tombstone and recited prayers, followed by the singing of traditional Chabad melodies, seemingly oblivious to the stark political contrast of guard towers and minarets in the background.The rediscovered map Just weeks before the event, a long-lost map was discovered in the estate of Rabbi Elazar Mordechai Gelbstein, longtime manager of the burial society in Jerusalem, and a member of the Council of Cemeteries, by his son Rabbi Yitzhak Gelbstein, who has followed in his father’s footsteps.Their ancestor, Rabbi Hillel Moshe Gelbstein, who helped refurbish the Western Wall after moving to Israel in 1869, is buried somewhere in the field. The map shows each grave with a number and where the original tombstone was located.Unfortunately, a corresponding book that lists the actual names of who was buried in which plot is still lost. Nevertheless, Hebron researchers are excited over the new discovery and hope it will be an important step in recreating and rehabilitating the ancient cemetery.Heritage today Today, a small, old stone building serves as a kollel for locals to study Torah. It is headed by Menachem Porter, a young teacher and writer.“It underwent massive reconstruction and now we come here every evening,” he explains, describing the domed structure that stands facing the cemetery.The kollel and the Ashkenazi section of the cemetery almost didn’t make it into the redrawn border. In 1997, during the Hebron redeployment, Menuha Rochel worked her miracles once again. The ancient cemetery is divided by a road, with the Sephardi section on one side – where such luminaries as the 16th-century kabbalist Eliyahu de Vidas and Haim Hezekiah Medini, the Sdei Hemed, are buried, as well as the victims of the 1929 massacre –and the Ashkenazi section on the other side, where many Chabad leaders are buried. Only an outpouring of protest prevented the cemetery from being divided and becoming part of the Palestinian area.Danny and Batsheva Cohen practice traditional Hebron hospitality, like that of Abraham, the Jewish patriarch who is buried in the nearby Cave of Machpela.“We came here 13 years ago and we are proud to support the soldiers and to maintain the many historic Jewish sites here,” Rabbi Cohen stated.“Just last week we had a celebration for the Givati Brigade, who are ending their tour of duty here.”The rabbi and his team of young volunteers arrange Shabbat home hospitality for the soldiers and weekly barbecues and free pizza. As the soldiers guard throughout the night, so do the volunteers as they walk from post to post distributing food and drink.“We need to support them both spiritually and physically, because they are helping secure the entire area for everyone,” he said.His wife is in charge of helping female soldiers, “She is fearless,” Rabbi Cohen enthused.The message of living in a historically and culturally important center was not lost on the many who visited Hebron, and that’s something that Menuha Rochel would probably have been proud of.