It’s something in the blood 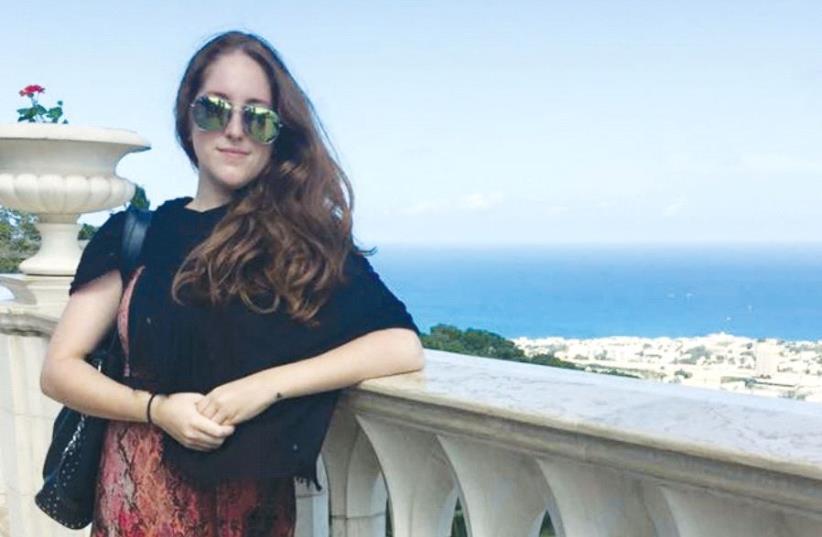 Jessica Evans
(photo credit: Courtesy)
Advertisement
Ever since she was a child growing up in Harrisburg, Pennsylvania, Jessica Evans wanted to visit Israel, but it took the wisdom and encouragement of her grandmother to enable her to realize her dreams, move to Israel and turn her life around.Raised by her mother and grandparents in Harrisburg, Evans attended Hebrew school, celebrated her bat mitzva, and attended Hebrew high school. She always had positive feelings for Israel, and as a nine-year-old, told her rabbi that she wanted to visit the tree that she had donated in the Jewish National Fund forest.“When I was young, I always wanted to come and visit,” she says, “but my family couldn't afford it.” Evans was active in her Jewish community until she began her college studies, but soon forgot about coming to Israel and seeing her tree. She attended college in Orlando, Florida, where she studied audio engineering. After completing her studies, she moved to Seattle, where she pursued an internship at a recording studio, which didn’t pan out. She was no longer involved in organized Jewish communal life.Yet when she moved yet again, this time to New Orleans, she realized that something was missing in her life, and she soon returned to an active Jewish life, energized by a Reform congregation that featured Friday night services with a New Orleans jazz beat. In December 2012, Evans joined a Birthright tour for her first visit to Israel. She thoroughly enjoyed the 10-day trip, which provided her with a taste of Israel.On her last day in the country, she told the trip organizers that she had a strong feeling that she would return someday to live here permanently.However, once again, real life intervened.Her mother suffered a series of strokes, and Evans needed to return to Harrisburg to care for her. She became a restaurant manager to make ends meet, and moved in her with her mother.It was then that her grandmother entered the picture. In early 2015, Evans, then 27 years old and feeling that her life was not focused, went to lunch with her grandmother, who asked her if she had regrets about her life thus far. Evans replied that her main regret in life was that she had been unable to live in Israel.Her grandmother encouraged, cajoled and persuaded her to return to Israel. Evans signed up for a 10-month volunteer program in Israel run by Masa Israel, which offers study, internship, and volunteer programs throughout the country. Evans, who has an affinity for Roman history and Latin – which she studied throughout four years of high school – chose Beit She’an, which has a past rich in history and Roman ruins.Evans wanted to make an impact.“I had spent so much of my time concentrating on my mother,” she says, “that I wanted to do something that would have an impact on the community where I lived.” Arriving in Beit She’an with virtually no Hebrew skills, Evans plunged into community life. She served as a teaching assistant in an elementary school, developed an English program for adults in the community, organized an English-speaking cooking and crafts program for disadvantaged children and became active in a young adult center.While coming to Beit She’an was, at first, something of a culture shock, she says that she was quickly welcomed into the community.“In Beit She’an, they speak the language of food – and smiles.” While there are not many English speakers in the community, she was set up with the few that they could find for her.The most positive change in her life in Beit She’an came about through a native Hebrew speaker – Amit, her significant other, whom she met through her volunteer work. Amit is a native Israeli of Moroccan and Yemenite ancestry, and the two are planning their future together. Both have managed to overcome their cultural differences; today Evans can expertly prepare couscous from scratch, and at the same time has managed to introduce Heinz ketchup into Amit’s family.Meanwhile, back in Harrisburg, her mother recovered, left the hospital and moved in with her grandmother, thus allowing Evans to focus on her work in Beit She’an.After the 10-month Masa program concluded, she decided to make aliya officially. She began the process while still in Israel, returned to the United States this past summer and came back to Israel in September, as an official resident of the State of Israel.Shortly before her aliya flight, Evans’s grandmother revealed why she had pushed her granddaughter to return to Israel. Her mother, Evans’s great-grandmother, left Lithuania in the early 1920s and had the opportunity to move to Israel. Instead, she chose to go to the US. This great-grandmother’s one regret in life, it turned out, was that she had moved to the United States instead of Israel. “Everything came full circle,” says Evans.Since her return in September, she began attending ulpan classes in Haifa to improve her Hebrew and serves as a part-time tour guide at the National Park in Beit She’an, where she can share her love of history with visitors.She also works part-time for Masa Israel, helping in marketing, and design of the organization’s website.“Everything that I do in Israel,” she says, “has a purpose. Living here, you can feel the energy of the place.”Not that life in Israel is perfect.“Service at the post office,” she sighs.“Of all the things in Israel, that needs the most improvement.”Many Americans who move to Israel choose to live cities and towns with others who share similar backgrounds.Jerusalem, Beit Shemesh, Ra’anana – the list of towns with sizable American enclaves is familiar. Jessica Evans is that rarest of birds, an American who is succeeding at aliya, in a predominantly Israeli development town located far from the center of the country.Where does she see herself in 20 years? She smiles. “Living in Beit She’an, with a more modernized society, and double the population. I have a big vision for the place.”Evans concludes, “Anything is possible here. Never give up, no matter how hard it gets. There’s always a way.”