The original Tikkun Leil Shavuot was not staying up all night listening to shiurim. 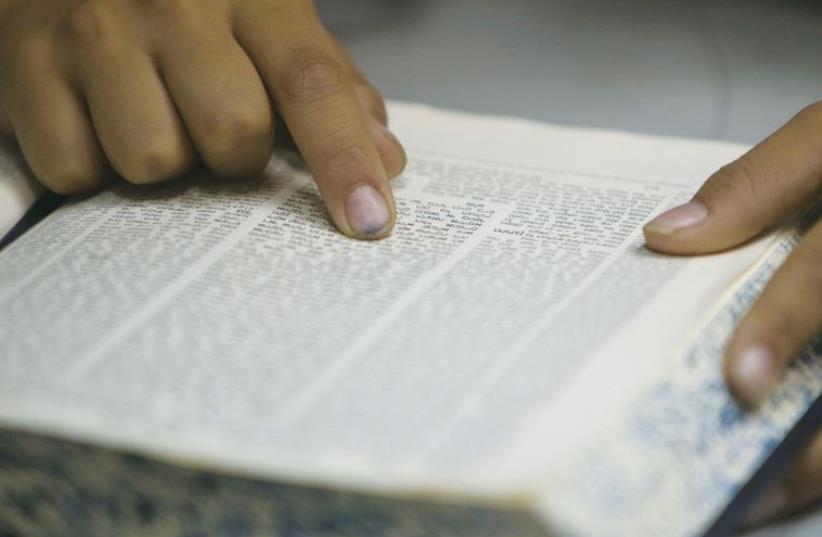 The practice of ‘Tikkun Leil Shavuot’ is to dedicate one whole night to the study of Torah and discussion
(photo credit: REUTERS)
Advertisement
Last week Jews around the world forfeited a night of blessed sleep by staying awake and learning Torah. This custom is called Tikkun Leil Shavuot.Where does this custom come from? We first encounter the term tikkun in rabbinic literature. The word “tikkun” in Hebrew means “repair.” In Aramaic though, the word means to adorn. It is a mix of these two definitions that have influenced Jewish practice and thought throughout the millennia.While there is probably no real definition of what is meant by the rabbis when they use the word tikkun, perhaps the best demonstration of it is found in the expression tikkun olam. We first find the term tikkun olam in the Talmud and it is used as a mechanism of change in legal codes. Although it appears over 30 times in the Talmud, it is a rather minor concept and is certainly undeserving of the prominence now accorded it in many liberal streams of Judaism.As Prof. Byron L. Sherwin has pointed out, “the meaning ascribed to it today, and the stature currently afforded it in the pantheon of Jewish values has no foundation in rabbinic theology, ethics, law, or literature.”When the Lurianic kabbalists encounter the concept of tikkun, the term rises in prominence. For them, tikkun plays a great role in the cosmic drama. Tikkun is seen as an extension of God’s work. Gershom Scholem explains that “the process in which God conceives, brings forth and develops himself does not reach its final conclusion in God. Certain parts of the process of restitution are allotted to man.”In other words, “It is man who adds the final touch to the divine countenance; it is he who completes the enthronement of God, the king and the mystical Creator of all things, in His own kingdom of Heaven; it is he who perfects the Maker of all things!” Thus, tikkun, as understood in this manner is not social action, but messianic action! The modern hassidic movement would further develop this idea as they placed much emphasis on the role of every Jew and gave meaning and value to Jews who were not righteous or learned. It was the democratization of Judaism from a learned elite to the masses that greatly contributed to the rise of the hassidic movement and filled a spiritual vacuum that existed in the lives of the Jews of the time.The Tikkun Leil Shavuot is different in nature. The word tikkun here has both the meaning of repair and to adorn.In the sense of repair, the tikkun seeks to rectify the sin of sleeping on the night of the Torah’s revelation. We repair this misdeed by staying up all night and learning Torah. Others believe that while the written Torah was received with the words na’aseh v’nishma, we will do and we will hearken, the oral law was accepted by force.To rectify that we learn the oral law with great strength to show our love and acceptance of it.In terms of adornment, we beautify the Torah that was given this night by learning more and more about it. Also the idea of the revelation at Sinai as acting as a kind of nuptial between God, Israel and the Torah. We were wedded to the bride, Torah, and therefore we adorn her as we would any other bride.The kabbalists see the tikkun on a whole other plane. The 49 days of the counting of the Omer are not a count to some agriculture or historic date, but a constant ascension up the ladder of the Sefirot. On the eve of the sexual union of Tiferet and Shechina, the bride is described as purifying herself during the counting of the Omer. The penitential quality of the Sfira period comes from this.As for the precedence for staying up all night – Philo of Alexandria records a custom of the Essenes staying up all night praying. The Zohar claims this is an old custom, and Philo and the Dead Sea Scrolls give credence to that; but in Rabbinic literature there is no real mention of a Tikkun Leil Shavuot before the Zohar.Prof. Meir Bar-Ilan claims that while there were Palestinian Amoraim who stayed up the night of Shavuot, they did not remain up all night. Nor is the custom mentioned in the Shulhan Aruch. This leaves the Lurianic kabbalists with the credit for creating a whole industry of Torah learning that night.In modern practice, Tikkun Leil Shavuot has crossed all sectors and spheres of Judaism.From the most liberal to the most Orthodox, it seems that every synagogue and Jewish institution of learning sponsors their own tikkun. In Jerusalem at least, where there are so many flavors and ideologies of Judaism abound, it is fascinating to see how each group organizes a tikkun based on their own agenda. During the night, at 2 or 3 in the morning, the streets are filled with Jerusalemites walking from lecture to lecture before making their way to the Kotel for morning prayers. Even the Israel Bar Association, a completely secular group sponsors an event with discussions on Hebrew law.I mention this because it is an illustration of how far a custom can stray from its origins. The original Tikkun Leil Shavuot was not staying up all night listening to shiurim. The original tikkun was a set text of prayers in which choice portions of the written, oral, and kabbalisitc Torah are recited. Those who created the original tikkun would no doubt smile at the amount of Torah that is now learned on their account, but would also shake their heads in amusement about how much we modern Jews have missed the point. Or have we? The writer is a doctoral candidate in Jewish philosophy and currently teaches in many post-high-school yeshivot and midrashot.