Seventh Day of Passover: Our commitment

On the seventh day of Passover, as we cross the Red Sea, with its attendant difficulties, we reaffirm our commitment that however desperate the situation, we do not surrender our ideals. 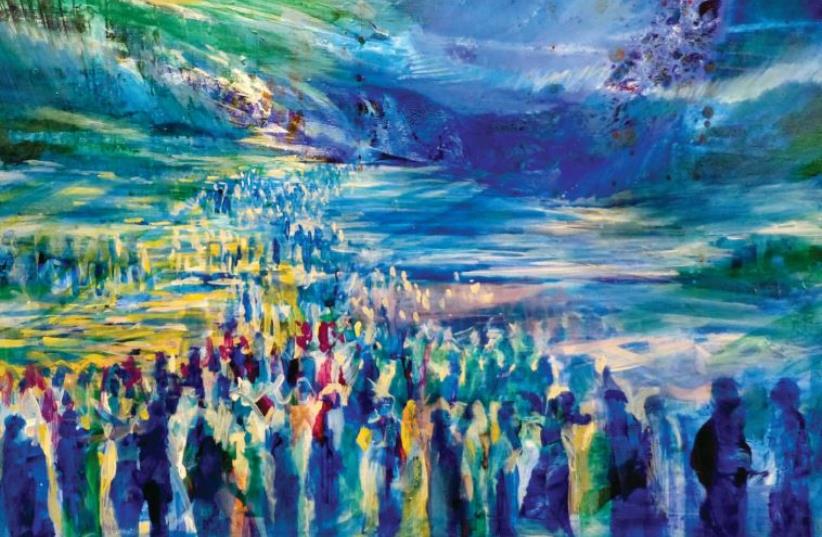 Painting by Yoram Raanan
(photo credit: YORAM RAANAN)
Advertisement
“Didn’t we say to you in Egypt, ‘Leave us alone; let us serve the Egyptians?’ It would have been better for us to serve the Egyptians than to die in the desert!” (Exodus 21:12) Painting by Yoram Raanan, www.RaananArt.comEven for a people of faith, the long wait for redemption can be hard. This week, Holocaust Remembrance Day marks the most chilling example of that, yet, amidst the darkness there are humbling stories of courage and idealism. How did people cling to that faith? On the seventh day of Passover, we rightly celebrate the miraculous crossing of the Red Sea, but at the time, it was unclear that the Jews were ripe for redemption or that the Jewish nation would survive.As the Jewish people saw the Egyptians chasing after them and the sea spread out in front of them, their future felt bleak. Their first instinct may have been, as the Ramban (Nahmanides) suggests, to pray for an Egyptian retreat, but when that did not materialize, feelings of hopelessness spread.“It would have been better for us to serve the Egyptians than to die in the desert!” they screamed at Moses.Their fears were well founded; they faced a formidable enemy, but legitimate nerves shouldn’t dissolve into desolation and despair. The complete collapse of confidence that led Jews to advocate a return to Egyptian slavery almost spelled an end to our history.According to some, even Moses’s prayers reflect the despondency. The Seforno explains that while our leader remained steadfast in his faith that God could rescue the people, he was far less confident that the Israelites would not pack up their bags and return to slavery in Egypt.Later in the Torah, we read about individual slaves who choose a lifetime of slavery over freedom. The Torah does not rule out this option, but it is withering in its critique of those who give up on life’s opportunities and the Jewish people’s mission.Becoming a slave for life is marked by a ceremony in which the slave is taken to a doorpost where his ear is pierced. Our rabbis explain that a Jew whose ears heard God declare that we are his people should never trade the chance of freedom for a lifetime of enslavement; hence the ritual of piercing the ear.The doorposts where we placed lamb’s blood on the eve of our Exodus to freedom testify to the independent life we are expected to lead, which is why that is the venue for the slave’s ceremony. Tosafot adds that the hole is made with an awl, whose Hebrew spelling has a numerical value of 400 – the number of years we were condemned to slavery in Egypt (Kiddushin 22b).To surrender the opportunity to play a role in Jewish history by turning oneself into an eternal slave is a denial of everything we hold sacred. As an embryonic nation, such panic was forgivable. God accepts it quietly, inviting the people to sit back and witness their own salvation. For Rabbi Samson Raphael Hirsch this moment forged our identity; developing faith and dignity for future generations who might not be privy to spectacular miracles.This was most powerfully illustrated by Jews who clung to their faith through the darkest and most challenging days of the Holocaust. Here are three examples.I am writing this column in the National Library of Israel. Sitting a few seats away from me with his head immersed in a volume of Talmud is Prof. David Weiss Halivni. As one of 2,000 prisoners held at the Wolfsberg concentration camp, he was put to slave labor in a squad that dynamited, chiseled and hauled rocks.Their Nazi guard ate his greasy sandwich from a crumpled bit of paper, which the teenage scholar instantly recognized as a page ripped from a Shulhan Aruch. Desperate for spiritual study material, he plucked up the courage to prize the page from the guard. Every week, Jewish inmates gathered to study the laws of Passover from that folio cementing their connection with Jewish history and tradition.Amon Goeth, commandant of Plaszow labor camp, was renowned for his brutality. It was said that he never sat down to breakfast without first shooting at least one Jew, while his dogs, Rolf and Ralf, were trained to savage the other inmates. Still, the Jewish slaves in his brush factory maintained their faith and sense of purpose with a secret daily Talmud class. When their studies were over, they rushed to complete their weekly work quota, to avoid laboring on Shabbat.Meanwhile, when the destruction of the Warsaw Ghetto and the murder of its remaining inhabitants seemed inevitable, young Jews from the Jewish youth movements determined that they would not surrender.Nor would they be anyone’s slaves. They would courageously fight the Germans; dying with dignity as Jews. Ghetto chronicler Emmanuel Ringelblum records the spirit.“‘Our fate is sealed,’ people were saying. Every Jew carries a death sentence in his pocket, handed him by the greatest murderers of all time. So we must think not so much of saving our lives, which seems to be a very problematic affair, but of dying an honorable death, dying with weapons in our hands.”Even in the most desperate times, Jewish dignity was to be upheld as best it could.It is hard to know how any of us would have responded to these challenges. Fortunately, we don’t have to.Today, we are blessed with a secure, democratic, Jewish state. That’s why it is particularly distressing to read reports of Jews who abandon Jewish tradition, drop their Jewish identity and give up on the State of Israel.On the seventh day of Passover, as we cross the Red Sea, with its attendant difficulties, we reaffirm our commitment that however desperate the situation, we do not surrender our ideals – a message inspired and reinforced by the example of those who clung on to their faith through the horrors of the Holocaust and battles for the establishment of Israel.  The writer is the British United Synagogue’s rabbi in Israel.