Shavuot: A holiday without a date

The Torah is not merely a book, but a unique worldview that ties morality together with faith, the goodness of holiness and the beauty in truth. 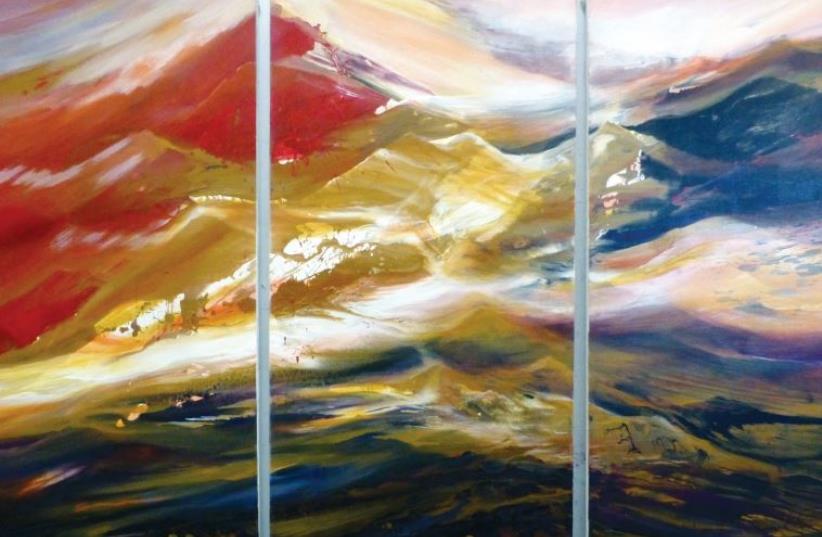 Painting by Yoram Raanan
(photo credit: YORAM RAANAN)
Advertisement
“When the Holy One, blessed be He, came to reveal the Torah on Sinai, the mountains ran about and contended with one another, each claiming, ‘The Torah shall be revealed on me!'" -Midrash Rabba Genesis 99:1

Painting by Yoram Raanan; Of all the Jewish holidays in the Torah, only one has no date. While Passover, Succot, Shmini Atzeret, Rosh Hashana and Yom Kippur all have a specific date, Shavuot – which begins this Saturday night – does not have a date written in the Torah. This does not mean that we can celebrate it on any random day. Despite not having one explicitly stated, it is marked at a specific time – 50 days after Passover – on 6 Sivan.What is the significance of this detail which has no relevant practical implication to keeping this holiday? Or maybe we should ask that question in reverse: If indeed Shavuot has a permanent date, why doesn’t the Torah state it rather than letting us calculate when the holiday falls? When we mention Shavuot in prayer, we do not refer to it as Shavuot. Our sages who wrote the prayers gave the holiday another name: Zman Matan Toratenu – “the time our Torah was given.”This name expresses a historic event of utmost importance that took place on Shavuot, referring of course to the revelation at Mount Sinai, when the people of Israel received the Torah.This is, apparently, the reason Shavuot did not get its own date explicitly written in the Torah.Receiving the Torah is not a onetime occurrence connected to a specific day. Though it did occur on a specific day, it is much greater than this. It is a comprehensive lifestyle, a complete way of thinking, a whole set of values. There is a tremendous difference between a person who lives life without the Torah and a person who lives life with the Torah. These are completely distinct lives.A folktale illustrates this well. A story is told of a Jewish wagon- driver who was sent to bring merchandise during the snowy Polish winter. Unfortunately, the horses got stuck in the heavy snow and the merchandise was lost. When the wagon-driver was sued before the local rabbi, the rabbi examined the details of the case and obligated the wagon-driver to pay for the merchandise.When the wagon-driver heard the verdict, he asked the rabbi: “You say that, based on Halacha, I have to pay, but when was this Torah given on which you base this verdict?” The rabbi responded: “In the month of Sivan.” When the wagon- driver heard this, he said: “Indeed, I knew it; it is all because the Torah was given in the summer. Had the Torah been given in the winter, there is no doubt it would have considered the heavy snow.”This amusing tale illustrates the misconception among many who believe the Torah is relevant only for specific days, specific places, specific people, or a specific generation. They believe it should be changed and adapted to different times and various constraints. Because of this widespread mistake, no specific date was given for Shavuot. This is to teach us that the Torah is not relevant to a specific day and then changed. Every day and at every hour, in every situation and for every generation, the Torah has something to teach people facing questions and problems.The Torah is not merely a book, but a unique worldview that ties morality together with faith, the goodness of holiness and the beauty in truth. The Torah guides a person in how to bequeath infinite significance to a single moment or individual person. The Torah teaches and guides the perplexed person who is debating how to choose from among different values and conceptions. The Torah is not just a book of mitzvot (commandments) and good deeds. It seeks to create a qualitative humane society that is not directed by power, respect and wealth but, rather, is based on grace, charity, justice, honesty and faith.In actuality, Shavuot has a date, but when viewed profoundly, Shavuot is every day. And as our sages said of the verse recited by us every day in the Shema, “And these words, which I command you this day, shall be upon your heart” (Deuteronomy 6:6) – They should seem new to you every day. With every correct choice a person makes, he celebrates his own personal “matan Torah,” and it is valid in every generation, in every situation and at any time. The writer is the rabbi of the Western Wall and Holy Sites.