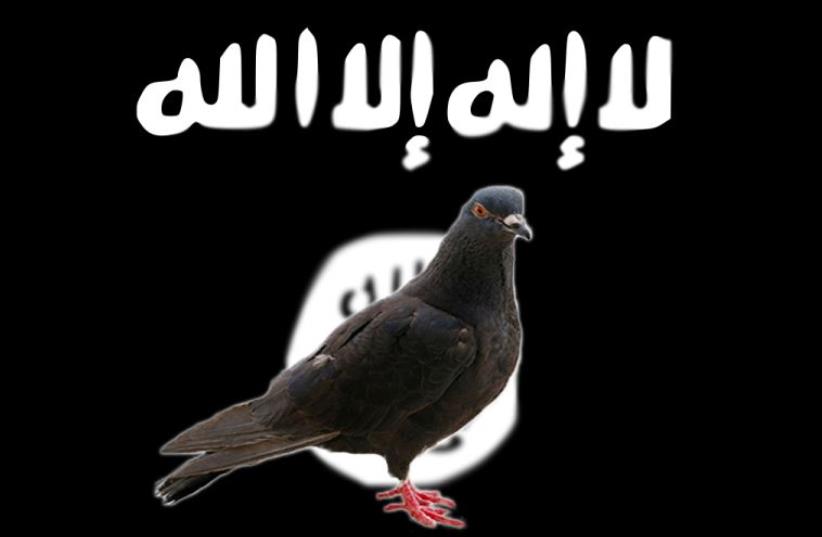 ISIS pigeon
(photo credit: ING IMAGE/ASAP,JPOST STAFF)
Advertisement
2015 was a year filled with headlines that seemed too strange to be true. The bizarre stories filled Facebook and Twitter feeds as readers realized these stories were actual real events and not satirical commentary. In celebration of a weird news year, the Jpost staffers picked their favorites and compiled a list of stories from 2015 that seem too strange to be true.   1. Walmart decides the Confederacy is more offensive than ISISBack in June, the Louisiana branch of the super chain store Walmart refused to print a picture of the Confederate flag with the words "Heritage not Hate" on a cake for customer Chuck Nethammer. Feeling offended by this experience, Nethammer decided to test the retail giant and returned the next day to the Northshore Boulevard store's bakery counter to place an order for a cake emblazoned with the Islamic State flag. To his surprise, the store readily agreed, for the "rollback price" of $19.98 plus tax.  2. It's all a little fishy: Hillary Clinton tackles a gefilte fish crisisIn by far one of the strangest of Hillary Clinton's emails made public by the US State Department in 2015, Clinton asked the assistant secretary of state on legislative affairs where they were standing on the gefilte issue. The email sent on March 10 was in reference to an American shipment of carp, or white fish, that was sent to Israel from Illinois ahead of the Passover holiday. Carp is the central ingredient in gefilte fish, which sees demand jump before Passover and the High Holidays.Carp was one of the items exempted from the 1985 free trade agreement between the US and Israel, along with oranges, apples and avocados. Out of fears that the American imports would be cheaper than the Israeli versions, the products usually  face a 120 percent import tax.3. Flipper the spy: Hamas captures what it claims to be aמ Israeli spy dolphinHamas frogmen seized a dolphin in August that it says the Israel Navy was using to attack members of its armed wing, Izzadin Kassam. They claimed to have take the dolphin captive and that the dolphin had been equipped with a remote control monitoring device and a camera.According to the sources, the captured device can fire small arrows that could kill or seriously wound anyone who dove deep into the sea.4. Big birds hit the streets: Emu and Ostrich take the cities by stormIsraelis were left pondering "why did the emu cross the road?" when one of the giant birds was spotted running alongside traffic on a highway in Herziliya back in January. The emu had escaped from a nearby farm.More recently, in December, an ostrich was wandering the streets of the Jerusalem neighborhood of Gilo having escaped from his home in the area.The owner told veterinary services that he purchased the female ostrich at an open-air market in Kfar Kassem. Since he bought it, he has been raising it in his home, though he failed to notify municipal officials as is required by law.5. Pigeon genitals are inappropriate, says ISISISIS clerics banned pigeon breeding in June threatening public flogging for anyone daring to violate the edict.The reason? The sight of birds’ genitals as they fly overhead is offensive to Islam.Reports said that 15 young boys were arrested and at least three of them executed in eastern Iraq after they were found to be engaged in pigeon breeding.ISIS terrorists justified the punishment by claiming that their pigeon breeding activities were distracting them from their worship.6. A late night plenum debate turned Knesset pajama party The opposition’s attempt to filibuster a vote turned humorous in July as the Knesset stayed up past midnight discussing a bill to postpone the deadline for passing a post-election budget.National Infrastructure, Energy and Water Minister Yuval Steinitz, who was not feeling well, went home to Mevaseret Zion to sleep without finding someone in the opposition to offset his absence.When the coalition found itself in a conundrum, appearing to be tied with the opposition ahead of the vote,  a coalition member managed to wake up Steinitz while then Economy Minister Arye Deri gave a long winded speech about his middle name, Machlouf.A bleary-eyed Steinitz shuffled in to the plenum attired in slippers and a polo shirt, attracting the derision of the opposition, who labeled the outfit his pajamas.After the budget vote passed, the Knesset continued the night’s agenda, including transferring the responsibility for rabbinical courts from the Justice Ministry to the Religious Services Ministry.7. Chocolate meltdown: Israeli airline passenger loses control over a bar of chocolateAn Israeli woman with a temperamental sweet-tooth was joined by her sister and husband in a verbal assault on an Israir Airlines employee who refused to sell her a chocolate bar. The vulgarity filled tirade was filmed and uploaded to the Internet by a fellow passenger and immediately went viral. Passengers eventually intervened when the incident appeared to be escalating into a physical confrontation. Lahav Harkov, Kahled Abu Toameh and Michelle Malka Grossman contributed to this story.