During the president's first official trip to Poland, his daughter Ivanka made sure to honor the nation's Jews. 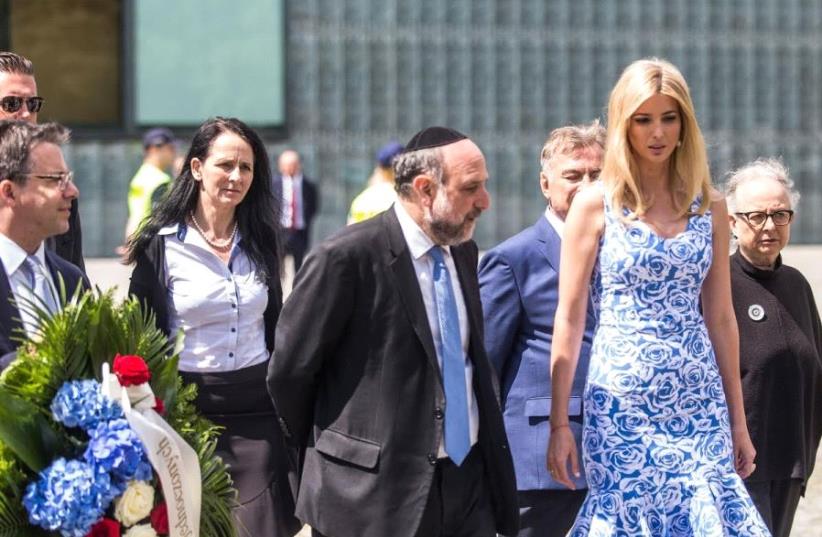 Ivanka Trump visits the Warsaw Ghetto monument and POLIN Museum of the History of Polish Jews
(photo credit: MAGDA STAROWIEYSKA / COURTESY POLIN MUSEUM)
Advertisement
Accompanying her father, US President Donald Trump, on his first official trip to Poland, first daughter Ivanka Trump paid her respects to the Polish Jews who died during the Holocaust. She visited the Monument to the Ghetto Heroes on Thursday, where she laid a wreath, and the POLIN Museum of the History of the Polish Jews in Warsaw. While Ivanka traveled to the monument, President Trump has come under fire from Jewish leaders for not making a stop there. The chief rabbi of Poland, Michael Shudrich, along with the president of the Jewish Community of Warsaw and the president of the Union of Jewish Committees in Poland, called it "a slight."

It was a deeply moving experience to be able to visit The Monument to the Ghetto Heroes and the POLIN Museum of the History of the Polish Jews. It was a privilege to be able to pay my respects and remember with gratitude those who fought with such tenacity against all odds.

During the president's visit to Israel in May, the Trump family visited the Western Wall, and laid a wreath at Yad Vashem.

Excited to have arrived in Poland last night. Looking forward to an amazing day as I visit Warsaw for the first time. #POTUSAbroad pic.twitter.com/ivMtZ3YEgd

President Trump is making a speech in Warsaw on Thursday afternoon and will then travel to Hamburg for a G20 summit. During his speech in Krasinski Square in Warsaw, Trump highlighted the relationship between Poland and the United States, spoke about Poland's Jewish community, and was joined on stage by individuals who took part in the Warsaw Ghetto Uprising.JTA contributed to this article.