Colin Powell represented a unique breed of US supporters for Israel, who had an emotional understanding of what makes Israel unique and what the country means in historic terms for the Jewish people.

With the death Monday of Colin Powell, the United States lost a trailblazer, and Israel lost a good friend.

Powell epitomized the American dream. A son of immigrants from Jamaica, he worked hard and studied and went into the military and rose to the top: the first black chairman of the Joint Chiefs of Staff, the first black national security advisor and the first black secretary of state

He also represented a unique breed of US supporters for Israel. He grew up in a Jewish neighborhood, worked at a Jewish-owned store where he picked up some Yiddish phrases and where the owner treated him with dignity, and he understood from his surroundings what Israel meant for the Jewish people.

In a speech to the World Jewish Congress in 2017, Powell recalled the “joy throughout” his neighborhood in the Bronx when Israel declared independence in 1948.

“Tears flowed, celebrations everywhere, it wasn’t just the Jews who were celebrating, the rest of us were celebrating for the Jews. We all shared in their joy, the joy of having a homeland,” he recalled. 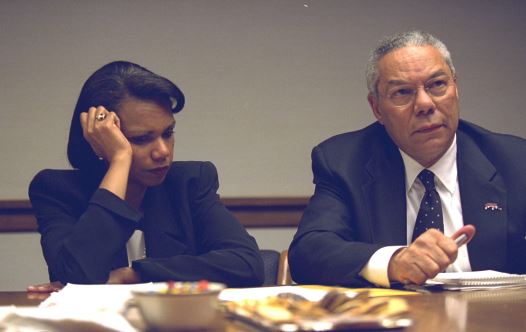 US. Secretary of State Colin Powell (R) and National Security Advisor Condoleezza Rice in the President's Emergency Operations Center in Washington in the hours following the September 11, 2001 attacks. (credit: REUTERS)

With those words Powell gave voice to something that Israelis and pro-Israel supporters search for in world leaders: a special place in their heart for the Jewish state, an emotional understanding in these leaders about what makes Israel unique, and what the country means in historic terms and for the Jewish people.

Powell had that understanding. Because of that, when there were disagreements between him and Israel’s leaders over the years and across his various positions, those disagreements were easily containable. He was a man whom Israeli leaders trusted and believed was genuinely attuned to Israel’s concerns and security interests.

And, as secretary of state from 2001 to 2005 during the trying days of the Second Intifada, the “Roadmap to Peace” and the preparations for the withdrawal from Gaza, Powell had his disagreements with Israel. In fact, Powell was the first US official in 2001 to talk about a Palestinian state as the likely outcome of negotiations, something that was not exactly music to the ears of Ariel Sharon, who was prime minister at the time.

But Powell was seen as staking out these positions as a friend, as someone well aware of Israel’s unique security circumstances, and not as someone trying to preach to Jerusalem or stake out the high moral ground. Powell had a way of disagreeing without being disagreeable. Not all secretaries of state before or since had that quality.

James Baker could be just plain disagreeable, as proven by his famous public admonishment to Yitzhak Shamir’s government to “call us when you are serious about peace.’’ He then read out the White House phone number.

John Kerry was also disagreeable, a result of a sense that he cared more about Israel’s “soul” and knew better what that “soul” needed and what was good for it than the Israelis themselves.

Powell didn’t radiate any of that.

At a speech in Washington in 2013 after being feted by the American Friends of Hebrew University, Powell said he rejects “arguments that say we can’t say anything wrong about Israel. They’re a democracy, they can take it and we can take it in return. We shouldn’t feel it necessary to agree with Israel on every issue. That’s not what mature friends do with each other.”

Kerry, or for that matter Baker, could have uttered the same words, and elicited in their Israeli listeners a much different response. In their mouths, this would have sounded like hectoring. But in Powell’s mouth – because of his track record with Israel, and because of the emotional way he spoke of the Jewish state in the past – these words sounded much less threatening.

Relations are heavily influenced by chemistry. Powell developed a chemistry with Israeli leaders, even those with whom he disagreed. Part of that had to do with the natural warmth he felt toward Israel that had its roots in the heavily Jewish milieu where he grew up.

Future US secretaries of state would do well to study Powell’s tenure to learn what works, and what does not work, in dealing with Israel. Powell generally found the recipe that worked.