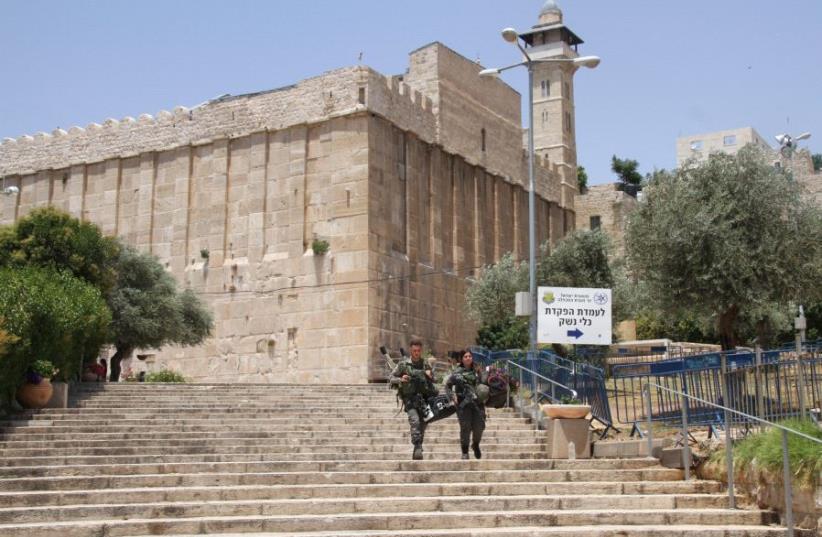 Tomb of the Patriarchs
(photo credit: TOVAH LAZAROFF)
Advertisement
With statehood evading them – mostly due to their own intransigence – the Palestinians are continuing their efforts to hijack Israel’s and the Jewish people’s national history and treasures in a failed and misguided bid to advance their cause.According to Shimon Samuels of the Simon Wiesenthal Center, the Palestinians are likely to use a meeting of UNESCO this summer to claim that the archeological site of Qumran and the Dead Sea Scrolls found there decades ago actually belong to them.The Palestinians apparently have a list of 13 sites they want to register under “Palestine” at UNESCO and have already had some success.The World Heritage Committee ascribed to “Palestine” Bethlehem’s Church of the Nativity in 2012; the agricultural terraces of Battir, site of the ancient Jewish fortress at Betar, in 2014; and Hebron’s Tomb of the Patriarchs in 2017. And there was of course, UNESCO’s infamous resolution last year that ignored any Jewish connection to the Temple Mount and the Western Wall.This all comes as another UN agency – the Human Rights Council – is considering a resolution to ban the sale of arms to Israel. As expected, the draft resolution was sponsored by members that are real beacons of peace and human rights – Bangladesh, Bolivia, Chile, Cuba, Ecuador, Jordan, Pakistan, Venezuela and the Palestinian Authority.The sad fact that UN institutions are biased against Israel is well-known and is nothing new. This is a shame on the UN and many of its members. What the Palestinians are now doing – trying to steal the Jewish people’s national history – is something completely different that should make any self-respecting government question whether Mahmoud Abbas really is a proponent of peace as he claims.Peace is meant to be the acceptance of the other as well as recognition of his or her national identity, narrative and history. If that is so, then why would the Palestinians want to claim the Dead Sea Scrolls as their own? Are they claiming, for example, that the Genesis Apocryphon, the only copy of a 2,000-yearold Jewish text elaborating on the Book of Genesis, tells their story? Were the Essenes, the Jewish sect that lived in the area of Qumran and wrote the scrolls, actually Palestinian Muslims and not Jews? This is not just absurd, it is sad. Unfortunately, it is highly possible that a resolution claiming that the Dead Sea Scrolls belong to the Palestinians will pass in a place like UNESCO.More than anything, though, this proposal exposes the Palestinians’ true face. They are not interested in a dialogue or negotiations with Israel. For that to happen, the Palestinian Authority’s leadership in Ramallah would need to be ready to make serious concessions on issues such as the “right of return” of refugees, Jerusalem and settlements. Why put yourself in a position that would force you to make hard decisions when you can try to erase the Jewish people? Why demonstrate responsible leadership when you can get the world to help you rewrite history? Abbas, who last week, called US Ambassador to Israel David Friedman a “son of a dog,” has used this past year to show that he is not really interested in peace.If he were, he would try all the time to test Israel and see how far Prime Minister Benjamin Netanyahu is willing to go to achieve peace with Israel’s neighbors. Instead of cursing American diplomats and calling for President Donald Trump’s house to come crashing down, he would, if he wanted peace, actively search for ways to get Israel to take the steps it needs to for there to be peace between the peoples.This is how these efforts by the Palestinians need to be viewed. They can try to steal Jews’ identity and history, but that will not advance their cause of statehood. They should also remember that they are not the first to try to erase Jews’ national identity and ultimately fail.All they have to do is look at Jewish history.