Moving to the Puerto Rico model would force the Arab east Jerusalem community to engage with the Israeli state in ways that it now is unwilling to. 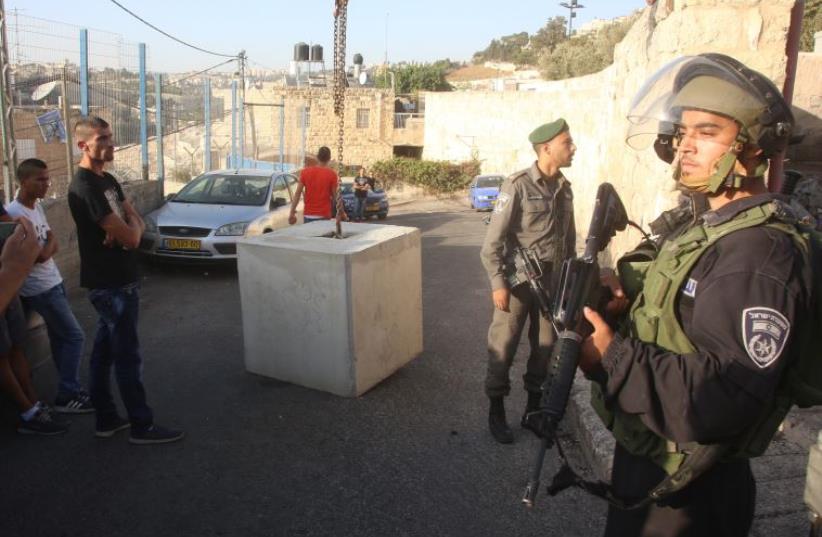 Concrete barriers set up in east Jerusalem neighborhoods
(photo credit: MARC ISRAEL SELLEM/THE JERUSALEM POST)
Advertisement
Unlike the West Bank, east Jerusalem inside the security wall has a special status; a status that should be modeled after the ongoing relationship Puerto Rico has to the United States.For many, the ongoing transition of the Israeli Arab population is the desired model. In the past decade, aggressive and sustained affirmative action government programs have dramatically improved their occupational and educational situation.This has increasingly led the Israeli Arab populace to demand that its politicians shift from confrontational nationalism to constructive engagement through the legislative process.In the most recent election cycle, this perspective informed the leadership that Ayman Odeh has provided to the Joint List.Working exclusively through the Knesset, he and his supporters in NGOs Sikkuy and Injaz won an unprecedented victory when the defense department changed its funding formula to dramatically reduce the inequities experienced by the Arab towns. And the ambitious plan to hire 500 Arab teachers to teach non-Arabic courses in Jewish schools is continuing to move apace. Most recently, the longtime Hadash leader Muhammad Barakeh was elected to head the Arab High Monitoring Committee against Islamic and nationalist candidates.And leading Israeli Arab figures, including Nazareth Mayor Ali Salam and broadcaster Lucy Aharish, have embraced a pro-Israel position.While more can be done, particularly an aggressive government campaign against right-wing Jewish extremists, the success of this strategy suggests that similar efforts in east Jerusalem can be effective at winning over the populace there, bringing it to align itself with the State of Israel. Indeed, this has been the strategy of Jerusalem Mayor Nir Barkat. In a series of policies effecting home ownership rights, medical service availability and infrastructure improvements, the well-being of the east Jerusalem population has improved. This improvement has led to a willingness of the population to take a more pragmatic view. Families are sending their children to alternative schools so that they can qualify for the Israeli university system and applying for Israeli citizenship to expand their employment and living choices.Critics, most prominently Daniel Seidemann, have done their best to misinform the international community about the improving situation. Describing the roots of the current unrest to a Christian Century reporter, he said, “East Jerusalem youth know they have no future, nothing to look forward to.” Summing up, he claimed, “The Israeli condition is one of denial, the Palestinian condition is one of despair and clinical depression.”What these critics neglect to mention is that the ongoing improvements in east Jerusalem are reflected in surveys. They find that a slight majority of residents favor Israeli citizenship rather than a shift of east Jerusalem to a Palestinian state. However, there are reasons why the Arab population of east Jerusalem will not be willing to embrace as fully the Israeli state as the Israeli Arab population does. This is why I believe that the Puerto Rico model can further advance the interests of both east Jerusalem Arabs and Israel.There are striking similarities between the situation of Puerto Rico and east Jerusalem.Both are less developed areas. Seidemann points to the east Jerusalem poverty rate being almost 3.5 times the rate for Israeli Jews. In 2012, the Puerto Rican poverty rate was more than 4.5 times higher than the rate for whites in the United States. However, the point of comparison for Puerto Rico is not white America but the other Caribbean economies. Similarly, the point of comparison for east Jerusalem should not be Israeli Jews.Just as in east Jerusalem today, in the 1960s and 1970s Puerto Rican nationalists strongly rejected union with the US and engaged in a spate of violence promoting independence. Just as the recent Israel surveys indicate, Puerto Ricans eventually rejected a move toward independence but still today are unwilling to embrace full integration in the form of statehood. The Puerto Rican cultural heritage, the years of colonialism and the physical separation are barriers that have not been overcome.How would the Puerto Rico model change the situation in east Jerusalem? First, east Jerusalem would have its own budget, to be administered by the community not mediated through a greater Jerusalem administration. They would elect a mayor who would directly engage with the State of Israel and West Jerusalem. As a bonus, it would likely dissuade right-wing Jews from taking up residence there as they would be under Arab governance. Second, it would allow more cultural autonomy beyond the current ability to maintain the Jordanian educational curriculum. In particular, there undoubtedly would be public events commemorating the “Nakba” which would be a welcomed outlet for the frustrations of the Arab community. In addition, Puerto Rico now has an elected official who is able to be on US congressional committees. Israel could go one better: an east Jerusalem elected official could be the 121st member of the Knesset.Moving to the Puerto Rico model would force the Arab east Jerusalem community to engage with the Israeli state in ways that it now is unwilling to, as evidenced by the lack of voting in Jerusalem elections. This new status would also further dissuade residents from being part of Palestinian state since they no longer had annexation by Israel as the only alternative. A move to a Puerto Rico model will be strongly opposed by right-wing Zionists and Palestinian nationalists, but may be the best way to move forward from the current quagmire.

The author is an economist at Brooklyn College and the City of New York Graduate Center.