ENCOUNTERING PEACE: The republic of Israel-Palestine? 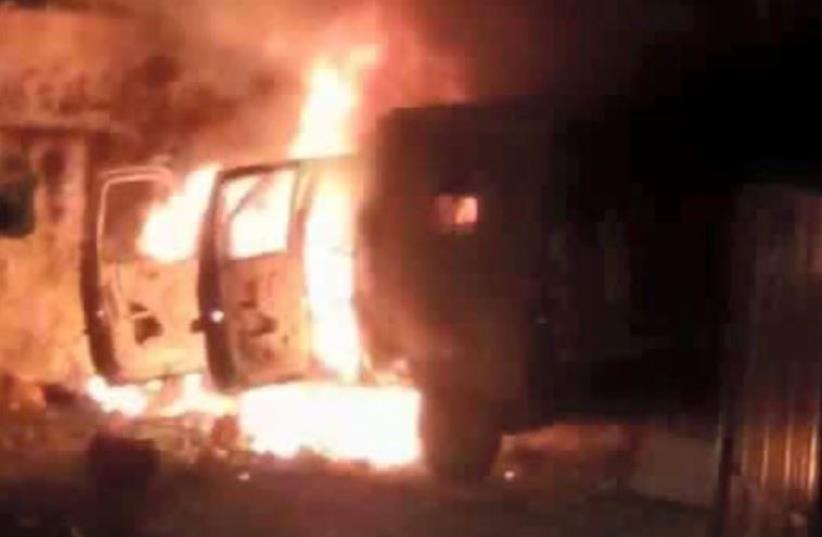 Military vehicle on fire in massive Kalandiya riot
(photo credit: Courtesy)
Advertisement
I felt at home during my first visit to Israel in 1969 for my bar mitzvah, and knew that my place was with my people. From as early as 1975 at the age of 19 I made the decision that Israel was going to be my home, and three years later it was. During that same year I became much more deeply aware of the Israeli- Palestinian conflict and, from a Zionist position, published my first op-ed piece in a Jewish newspaper calling for a two-state solution. Since that time I have believed and advocated that in order to ensure Israel’s future as the democratic nation-state of the Jewish people, it is essential that the Israeli-Palestinian conflict be resolved.Understanding that the roots of this conflict are in the willingness of both the Jewish people in Israel and our Palestinian neighbors to fight, die and kill for a territorial expression of their identity, the only resolution to the conflict is territorial partition – two states for two peoples. I am completely convinced that this is the only solution, but with the passing of time and the failure of all attempts thus far to arrive at that solution, have tried to entertain the possibility that partition may not happen.As an academic, intellectual exercise I tried to imagine what a peaceful solution to this conflict could look like that did not entail partition – the so-called “one state solution.” If solution means end of conflict, then it is clear that that state would not be the nation state of the Jewish people, or the nation state of the Palestinian people. If the intent is solution, then it would have to be a democratic state.I decided to look at the Constitution of the Republic of South Africa to get an idea of what a republic of Israel-Palestine might look like. It is a very long document and difficult to summarize, but its main feature is absolute equality under the law.Under such a constitution, all Israeli citizens would be equally entitled to the rights, privileges and benefits of citizenship, and equally subject to the duties and responsibilities of same. The republic would need a new national anthem, determined by parliament and in both Hebrew and Arabic. The national flag of the republic would be a combination of the Israeli and Palestinian flags. The official languages of the republic would be Hebrew, Arabic and English, and the state would have to take practical measures to elevate the status of the first two throughout the republic.It is hard to imagine such a state. If it were possible it might be a nice place to live, but I know that even with all the lofty words an ideals in the world, such a constitution will not resolve the issues at the core of the conflict. A republic of Israel-Palestine would not provide the Jewish people or the Palestinian people the territorial expression of their identity. It would not provide self-determination in a land they called their own. Such a republic could perhaps someday in the distant future emerge after a long period of living in peace, side by side, when each side feels much less threatened and much more secure. We are very far from there and have a lot of work to do – on both sides – to secure much more egalitarian societies within our own communities. We must learn to recognize and to respect each other’s national identities and to learn so much more about each other before we could even come close to a one-state solution.Today we have a one-state binational reality and it is bad for Israel and bad for Palestine. This is no solution and our very existence is at risk. The new Egyptian initiative may open the door to renewed negotiations. Getting back to the table for genuine negotiations is the right direction. Expanding the table to include additional neighbors is the right way to ensure greater stability, security and economic horizons. Those who wish to preserve their national identity must be willing to embrace the compromises necessary to partition this land into two states for two peoples. Those who are not should be begin to translate the above Constitution of the Republic of Israel Palestine into political actions.

The author is co-chairman of IPCRI, the Israel Palestine Creative Regional Initiatives, a columnist for The Jerusalem Post and the initiator and negotiator of the secret back channel for the release of Gilad Schalit. His book Freeing Gilad: the Secret Back Channel has been published by Kinneret Zmora Bitan in Hebrew and as The Negotiator: Freeing Gilad Schalit from Hamas by The Toby Press.