We have no control over when the next major earthquake will hit Israel. But we can prepare for the worst before it is too late. 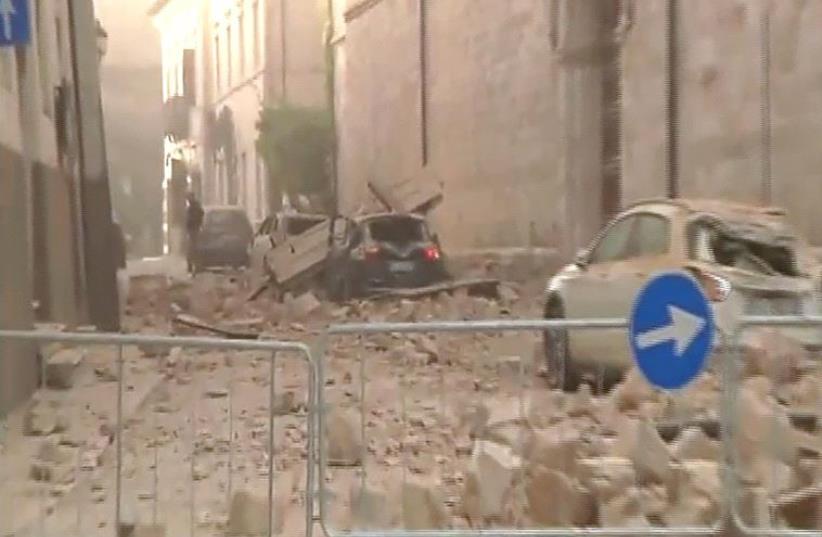 Destroyed cars under rubbles after an 6.6 magnitude earthquake on October 30, 2016 in Norcia
(photo credit: HO / AFP)
Advertisement
The earthquakes that have rocked Italy in recent days should be a reminder that we in Israel are not immune to the ravages of mother nature.Indeed, a destructive earthquake striking in Israel is not a question of “if,” but rather of “when.” Israel straddles the Syrian-African fault or the Great Rift Valley, making the Jewish state particularly vulnerable to earthquakes.In May, tremors could be felt in southern Israel after a 4.8 magnitude earthquake struck in Dhab, Egypt, about 100 kilometers northwest of Eilat.In April, a 4.4 magnitude earthquake struck under the Dead Sea.In recent months there have been dozens of smaller temblors – all under 4 on the Richter scale, many with an epicenter in the Mediterranean Sea – that were not felt.The last major earthquake to strike Israel was in 1927. It measured 6.2 on the Richter scale, killed 500 people and injured 700 more. Earthquakes on this scale happen on average every 80 to 120 years. More destructive ones that exceed magnitude-7 occur every 1,000 years or so. The last one took place in 1033.An earthquake scenario was prepared about five years ago by an interministerial steering committee for earthquake preparation. In a case in which an earthquake with a 7.5 magnitude strikes in the North, the committee estimated that 16,000 would be killed, 6,000 would be seriously injured, 83,000 would be moderately injured and 377,000 would be made homeless.Other studies have found that an earthquake measuring around 7.5 on the Richter scale would kill around 7,000 and injure thousands.No matter which estimate is closer to the truth, both set the number of casualties higher than that of those killed in a war. Electricity and food supplies were be disrupted, resulting in more suffering and even death.Is the government doing enough to prepare? A 2011 comptroller’s report found that, for decades, consecutive governments have done precious little to prepare for a major temblor. Building inspectors are notoriously understaffed. A number of hospitals in the North and in the South have not been reinforced to sustain the shock of an earthquake, according to the report.In 2013, Dr. Efraim Laor of Haifa University, an expert in natural disaster preparedness, warned in an interview with The Marker that if an earthquake hit Israel during the day when children were at school the tragedy would be multiplied, because many of our schools are not constructed to stand up to an earthquake.Buildings constructed before 1980 are not covered by Israel Standard 413, an internationally accepted building code designed to protect against earthquakes.In 2005 Israel passed “Tama 38,” a nation-wide program to enforce older residential buildings that include various incentives such as state-subsidized renovations and room additions in exchange for agreeing to participate. In 2008, the government set aside NIS 2.5 billion over the next 25 years for reinforcing buildings.However, while this program, which essentially privatizes earthquake preparation and makes it the prerogative of the citizen, has been modestly successful in areas where real estate prices are high, it has failed in outlying areas, which happen to also be most at risk of being hit hard by an earthquake.There are about 70,000 apartments in danger of collapsing in the event of a massive earthquake, according to a study commissioned by the Housing Ministry.Another major danger is exposure to dangerous chemicals as a result of a quake. The comptroller’s report mentioned the Haifa Bay area as being particularly vulnerable.Even without an earthquake, there have been a number of incidents involving the release of chemicals such as ammonia into the atmosphere. Nevertheless, a large ammonia tank remains in place in Haifa, despite repeated attempts to move it to a less populated area.The government should take the horrific devastation visited upon Italy as a wakeup call. Public buildings such as schools and hospitals must be reinforced. In addition, the Tama 38 plan should be reevaluated in outlying areas.Grants or interest-free loans should be provided to citizens in the North and South to encourage implementation.And industries that produce dangerous materials should be moved away from highly populated areas.We have no control over when the next major earthquake will hit Israel. But we can prepare for the worst before it is too late.