Hundreds of thousands of visitors – schoolchildren, soldiers, VIPs and common citizens – stream annually to see the excavations which prove that here King David established his capital. 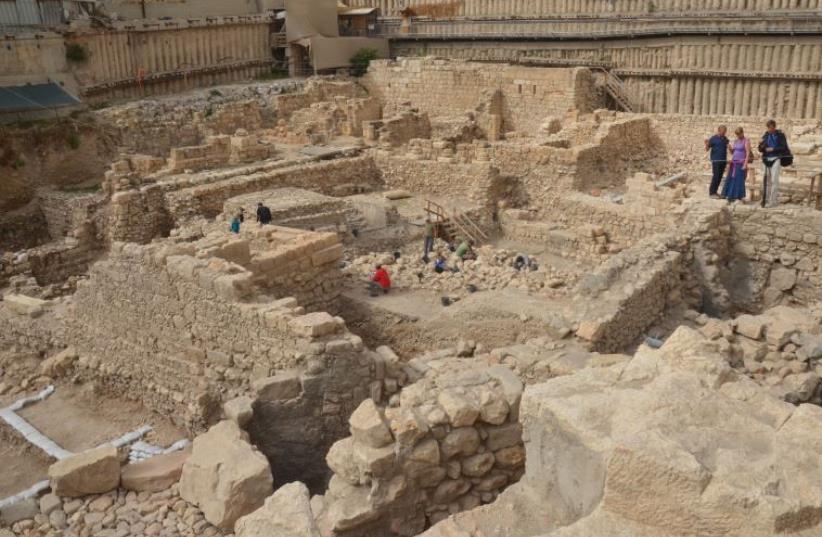 A view from the Jerusalem excavation site in the City of David‏
(photo credit: Israel Antiquities Authority)
Advertisement
The recent announcement that David Be’eri is a winner of this year’s Israel Prize for his efforts to restore and develop a former Jewish neighborhood in Jerusalem has revived political controversy over the identity of the ancient Jewish capital known as the City of [King] David, also known by its Arabic name as Silwan.The original, biblical Hebrew name for the place is Siloam, the name of the pool of water from which King Hezekiah had constructed a tunnel connecting it to the Gihon spring to provide water for the then besieged city.This area of the modern capital of Israel was created in the early 1890s in the proximity of the Western Wall as Hashiloah, a village for religious Yemenite Jews that thrived until the Arab riots of the 1930s, when the British Mandate authorities forced them to move elsewhere for their safety.Documents uncovered as recently as May 1995 show that Arabs illegally took ownership of Jewish homes in Silwan before 1948, after which it fell under Jordanian occupation until the reunification of Jerusalem in June 1967.Ever since the Six Day War, the municipality has met the awesome challenge of restoring parts of our capital that were desecrated and destroyed by the conquering Jordanian Army in 1948.This desecration extended to the biblical Jewish cemetery on the Mount of Olives, whose gravestones were used to pave roads through the cemetery for the construction of the Inter-Continental Hotel (now the Seven Arches Hotel) at its summit.David Be’eri and Tzvi Levy were named as the 2017 Israel Prize winners for lifetime achievement and exceptional contribution to the nation by Education Minister Naftali Bennett.Levy, a kibbutznik from Yifat in the Jezreel Valley, received the prestigious award for his contribution to IDF lone soldiers, without close relatives in the country to help them.Be’eri is founder of the City of David Foundation (Elad), which is committed to “revealing and connecting people to ancient Jerusalem through archeological excavations, tourism, educational programming and residential revitalization.”Last month, the municipality issued demolition orders for 16 illegally built structures and homes in Silwan, triggering the knee-jerk opposition of Emek Shaveh, a left-wing consortium of archeologists and activists that has repeatedly condemned the so-called “Judaization” of east Jerusalem. This trendy civil rights activist Emek Shaveh has never spoken out against the Arabization of Jerusalem.Be’eri, who founded Elad, has renovated the City of David, transformed the Silwan parking lot into a major archeological site and continues to legally purchase Arab property to help relocate Jews there. Bennett has lauded Be’eri as among the “greatest builders of modern-day Jerusalem.”Yonatan Mizrahi, the executive director of Emek Shaveh – who has filed numerous petitions to the High Court against Elad’s restoration work – told The Jerusalem Post that Elad is a thinly veiled mechanism to change facts on the ground in east Jerusalem.This is not so, according to renowned archeologist and Jerusalem Prize laureate Dr. Gabriel Barkay, who called Emek Shaveh misguided in its criticism of Be’eri. “I think Be’eri is a pioneer,” Barkay told the Post. “When I was in the City of David 20 years ago, which is the ancient core of Jerusalem, places were neglected and inaccessible, and I was the only visitor. Now, there are hundreds of thousands of visitors.”“It’s stupidity” to speak of “Judaization,” he declared.“The City of David was the ancient core of Jerusalem, and Muslims and Christians were not there then.”Be’eri welcomed the prize as “another important step in strengthening the connection between the State of Israel and the Jewish people to our legacy in Jerusalem.”Hundreds of thousands of visitors – schoolchildren, soldiers, VIPs and common citizens – stream annually to see the excavations which prove that here King David established his capital and Solomon built the Temple.We applaud the decision to give Be’eri the Israel Prize and to clearly state that Israel has an inalienable right to reestablish and reaffirm Jewish sovereignty over all of its eternal capital.