The question is whether King Abdullah is willing or even able as Jordan’s leader to change his people’s perceptions of Israel. 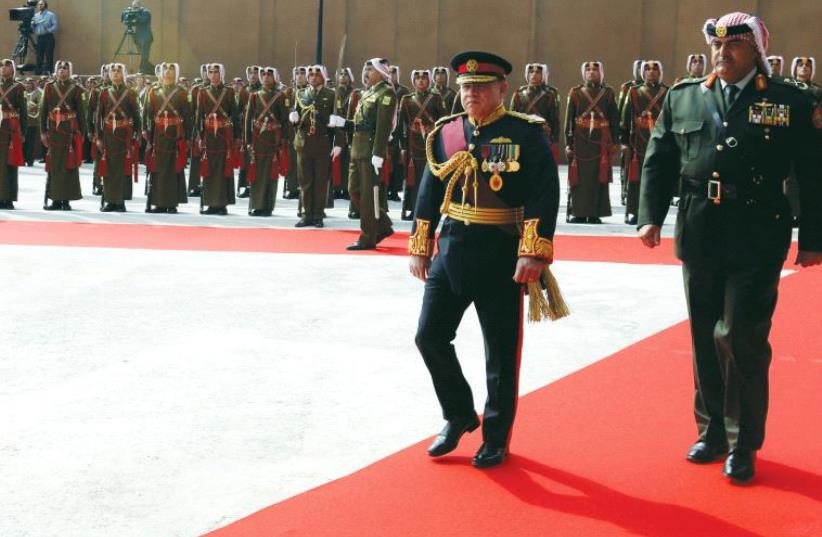 KING ABDULLAH reviews the honor guard during the opening ceremony of the first ordinary session of 18th Parliament in Amman
(photo credit: REUTERS)
Advertisement
‘Disconnect” is the word that best describes relations between Israel and Jordan. On the official, governmental level, ties between the countries are at a new apex. Never since 1994, when Yitzhak Rabin and King Hussein ended decades of conflict with the signing of a peace agreement, have relations between Amman and Jerusalem been so good. And that is primarily because the two countries have many shared interests.But animosity remains high on the Jordanian street.The majority of Jordanians are of Palestinian origin and they tend to sympathize with their fellow Palestinians in the West Bank. The extent of Jordanians’ hatred for Israel and its people was on display with the release from a Jordanian prison this week of Ahmed Daqamseh, who served just 20 years for the cold-blooded murder of seven Israeli schoolgirls aged 13 and 14. Jordanian authorities, sensitive to staying on good terms with Israel, attempted to limit media coverage of Daqamseh’s release and he was let go late Saturday night with no fanfare.
Jordanians protest multi-billion dollar gas deal with Israel
However, there was a sharp disconnect between this official stance and the welcoming he received on the Jordanian street. Daqamseh, who has become something of a symbol for many Jordanians hostile to the idea that Jews are entitled to a sovereign nation in their historical homeland, received a hero’s welcome. The man who as a Jordanian soldier opened fire on a group of innocent teenage girls visiting the ill-named “Island of Peace” along the Israeli side of the border with Jordan, was received with celebrations and praise by hundreds of friends and relatives in his hometown of Ibdir.Daqamseh exploited the media coverage to hurl insults at Israel.“Don’t believe the lie of normalization with the Zionist entity,” he declared. “Don’t believe the lie of the two-state solution; Palestine united is from the ocean to the river... there is no state called ‘Israel,’” he said in an interview with Al Jazeera.Many reasons have been given for justifying, or at the very least understanding, Jordanians’ hostility toward Israelis. Some experts who spoke to Ben Lynfield, The Jerusalem Post’s Arab affairs correspondent, noted recent Israeli legislation, like the controversial settlement bill and the so-called muezzin bill.In addition, a story in The Washington Post noted that Jordanians see Daqamseh’s premeditated murder of schoolgirls as revenge for IDF soldiers who kill Palestinians during military operations or violent demonstrations.One of the major causes of tension, however, seems to be Israeli visits to the Temple Mount. Jordan, under agreements with Israel and the PLO, enjoys a special role as custodian and views Israeli visits and attempts by some to exercise their right for religious expression at what is considered by Judaism to be the holiest spot in the world, as a violation and desecration.On the governmental level though, ties are good. Israel provides Jordan with critical intelligence and military backing to combat ISIS; Israel signed a lucrative 15-year, $10 billion natural gas deal with Jordan last year; Israel cooperates with Jordan on energy, water and environmental issues; and Israel promotes the Jordanian economy by providing work for Jordanians and giving Jordanian exporters access to Haifa Port.Apparently for the Jordanian people, none of this is worthy of acknowledgment. The question is whether King Abdullah is willing or even able as Jordan’s leader to change his people’s perceptions of Israel.His father, King Hussein, was strong enough to take unpopular steps that, if he had lived long enough, might have transformed relations with Israel not just on the governmental level but also on the grassroots level between peoples.After the massacre of the seven school girls, he personally traveled to Israel to comfort the mourning families and apologize. That gesture touched Israelis and did much to change attitudes in Jordan.King Abdullah should follow in his father’s footsteps and, at the very least, condemn Daqamseh. Ultimately, lasting peace between the countries is a strategic interest for Jordan, just as it is for Israel. It is time for everyone – on both sides of the Jordan River – to understand that.