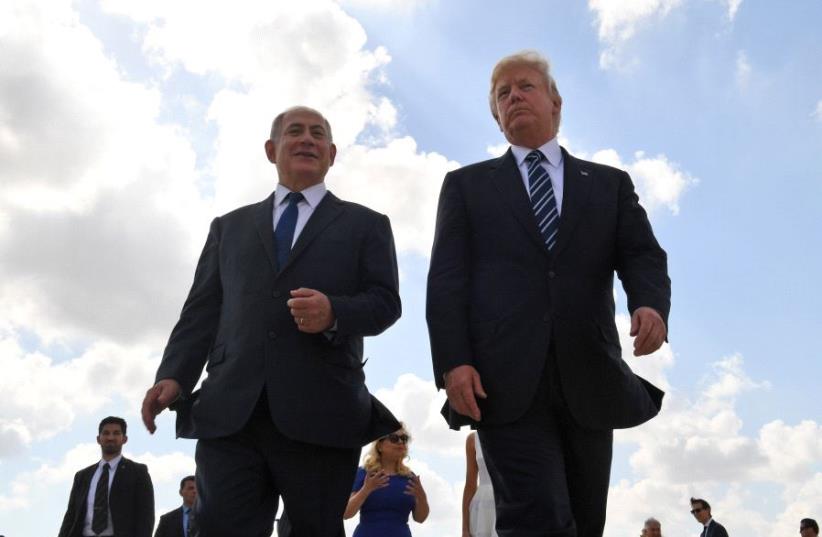 Prime Minister Benjamin Netanyahu and US President Donald Trump at Ben Gurion International Airport
(photo credit: KOBI GIDEON/GPO)
Advertisement
Maybe US President Donald Trump really believes that, given recent developments in the region, peace between Israel and the Palestinians is possible. Maybe he sees a successful conclusion of the Israeli-Palestinian conflict as a necessary preamble to economic cooperation and resurgence in the region led by the US. Maybe he sees it as a personal challenge – the ultimate deal.
Trump: Saudi Arabia has a “very positive” feeling toward Israel (credit: REUTERS)
Whatever the reason, US President Donald Trump is remarkably focused on the goal of bringing together Israelis and Palestinians and resolving once and for all a conflict that has received the attention of every US president in recent history. And when Trump talks of peace he is taken seriously. When Barack Obama or John Kerry invested time, energy and clout in bringing together Israelis and Palestinians they were said to be naive, messianic and dangerous to Israel’s security. Yet, when the same optimism is expressed by Trump, the Saudis, the Egyptians, the Jordanians, the Palestinians and Israel keep an open mind.Prime Minister Benjamin Netanyahu has begun using “peace” again, a word which tends to elicit cynicism on the Right due to the bad track-record of peace initiatives. If peace is mentioned at all these days it is normally in conjunction with “security.”Yet during a meeting with Trump in Jerusalem on Monday night, Netanyahu said, “I also look forward to working closely with you to advance peace in our region... The Arab leaders who you met yesterday could help change the atmosphere and they could help create the conditions for a realistic peace.”Trump seems to have been impressed by his meeting with Arab leaders in Saudi Arabia and their willingness to engage with Israel. But unlike Netanyahu who envisions peace with the Palestinians as an extension of improved relations with the Arab nations of the region, Trump and the Arab leaders he met in Riyadh view resolution of the Israeli-Palestinian as a precursor to better ties between the Jewish state and the Muslim world. Saudi Arabia, Egypt and Jordan will not facilitate an atmosphere more conducive to peace between Israel and the Palestinians by improving ties with the Jewish state. Rather, open relations between Israel and “moderate” Sunni states will be conditional upon headway in peace talks with the Palestinians.For its part, Israel has agreed to make some confidence building gestures. Trump asked for, and received, a promise from Israel that it would slow down building in Judea and Samaria.On Sunday, the security cabinet voted in favor of a package of steps that included easing travel restrictions for Palestinians on Allenby Bridge which connects the West Bank to Jordan, the development of two new job-producing industrial zones, and new allowances for Palestinian building in Area C of the West Bank, which is under full Israeli control.Trump has called on the Palestinian Authority to stop incitement against Israel. He also criticized Palestinian funding of imprisoned terrorists. Speaking alongside PA President Mahmoud Abbas in Bethlehem, Trump condemned the terrorist attack in Manchester that killed 22 and left dozens injured.Trump noted that “peace can never take root in an environment where violence is tolerated, funded and even rewarded.” This was a clear reference to Palestinian society’s glorification of terrorists who murder Israelis and the PA ’s funding of the families of “martyrs” who died carrying out terrorist attacks against Israel or prisoners incarcerated in Israeli jails for terrorist activities.As Trump takes leave of the region and heads to Italy, his major contribution to the peace process so far has been his successful resuscitation of non-cynical discourse on the prospects of peace. But the truly hard work has barely begun.Will Palestinian leaders take Trump’s advice and stop glorifying terrorists? Can Israel make additional gestures that would make Palestinians’ lives easier? If there is goodwill on both sides, perhaps Trump’s self-confidence and optimism are not so misplaced after all.