There is no “UN” campaign against Israel. It’s a campaign of member states. 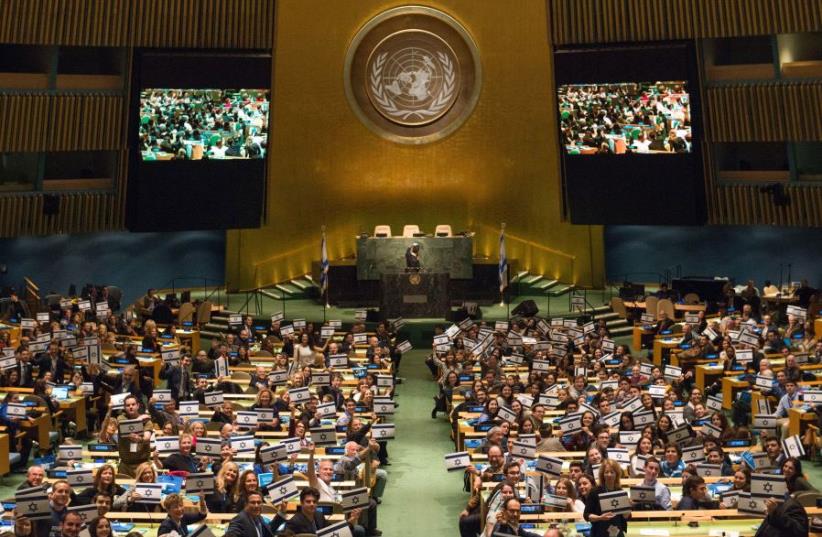 The United Nations GA filled with Israeli flags during anti-BDS summit
(photo credit: SHAHAR AZRAN)
Advertisement
Prime Minister Benjamin Netanyahu’s visit to Africa this past week perpetuated the myth that, while Israel enjoys good relations with most countries around the world, the monolithic and insidious United Nations keeps ruining the vibe. Blaming an institution that can’t defend itself is much easier than calling out its member states – especially when Israel can’t afford to alienate them. And the spectacle of standing up to a nefarious bureaucratic conspiracy plays well among Jewish audiences.In New York last September, Netanyahu reminded the UN General Assembly that “year after year I’ve stood at this very podium and slammed the UN for its obsessive bias against Israel.” In between admonishing and ridiculing the delegates in the hall, he bragged about his friendships with their bosses – as though these ambassadors would disobey voting instructions from their own governments.When directly addressing fellow leaders in Africa or anywhere else, Netanyahu is far more solicitous. Here’s how he put it last Sunday to the Economic Community of West African States (ECOWAS), whose 15 member nations routinely vote to condemn Israel and deny Jewish rights to Jerusalem: “I ask for your support in rejecting anti-Israel bias at the United Nations, and in bodies such as the General Assembly, UNESCO and the Human Rights Council.”That’s right: with a straight face, Israel’s prime minister asked active supporters of the UN’s “anti-Israel bias” for their help in countering the UN’s anti-Israel bias.As they do perennially, last November these same ECOWAS members joined nearly 140 states voting for the General Assembly’s infamous resolution which declares that Israeli efforts to impose law and order in Jerusalem are “illegal and therefore null and void and have no validity whatsoever....”Abstaining were Australia, Cameroon, Panama and some scattered Pacific Island nations. The United States and Canada voted no, as did a few other Pacific islands. For New York or Geneva, it was just another Wednesday.Either anti-Israel bias poses an overarching existential threat to the Jewish state or it does not. Given the congenial tone of Netanyahu’s ECOWAS speech, and his other dealings with world leaders outside of the General Assembly, perhaps our sense of urgency is overblown.There is no “UN” campaign against Israel. It’s a campaign of member states, including nearly every single government Netanyahu has ever praised or bragged about befriending. He reserves his scorn for “the UN.” And while he collects trade deals and cooperation agreements around the world, he gets legions of Jewish NGOs to highlight the UN’s unfairness to Israel, a bias for which those same countries are responsible.I am not suggesting the government of Israel start a reverse boycott against the vast majority of governments that routinely condemn Israel under the aegis of the United Nations. That would be counter-productive to building the kinds of bridges and partnerships that allow Israel to keep thriving.What I am suggesting: stop exhorting world Jewry to premise our UN advocacy upon a fool’s errand, which the government of Israel undermines every time it plays “good cop” with the very nations lining up to cast votes against the Jewish state. Stop enticing us to focus our efforts on defensive and reactive hasbara, public diplomacy, when we could be building more of our own bridges within the UN system and with those member states.The State of Israel wasn’t supposed to have the monopoly as a “light unto the nations.” That privilege and that responsibility extend to the Jewish People as a whole. It may be time for Jewish NGOs to reclaim our share of this mantle at the UN, so we can support the work of the UN itself – regardless of how often Israel’s allies vote against us. When those friends aren’t adopting what are mostly symbolic resolutions, they and the dedicated UN staff are keeping peace, sheltering millions, eradicating poverty and disease, advancing rule of law, showcasing Israeli technology, and increasingly calling non-Israeli human rights violators to account.We can choose to join Israel’s diplomats in being a part of this positive force, or we can continue being a onetrick pony giving cover for Netanyahu’s political narrative – a narrative in which Israel’s problems are conveniently blamed on “the UN” rather than on his own policies and those of his fellow world leaders.It’s unlikely that most Jewish NGOs will let go this myth of “the UN,” but it’s neither fair nor helpful, to Israel or to the world.The author is former director of international organizations for the World Jewish Congress.