On this Yom Kippur, the government does not need to atone

I do not expect the government to atone after the next terrorist attack. Instead, its role is to apply the lessons of the 1973 war and seize an opportunity to break away from the Palestinians. 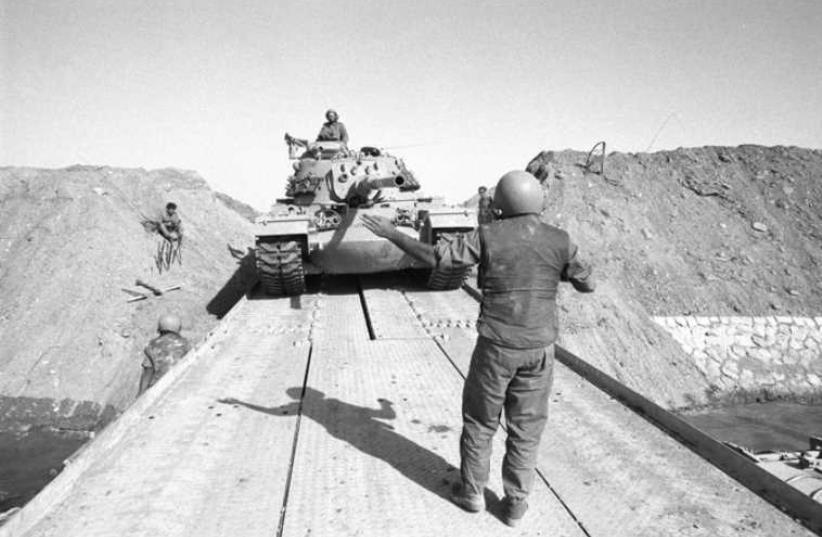 IDF tanks cross the Suez Canal
(photo credit: Wikimedia Commons)
Advertisement
Last week marked the 43rd anniversary of the Yom Kippur war, a time for remembering the fallen, supporting the wounded and embracing their families for the enormous sacrifice they have made. 2,500 soldiers lost their lives in one of Israel’s deadliest wars and thousands of others endured severe wounds.I first heard of the Yom Kippur War as a young officer, when I was with my friends in the 890 battalion of the 35th brigade following a long training stint at the Beit Lid base. The battalion was under the command of future defense minister Itzhak Mordecai. We already knew we were at war – but at that stage we did not know how severe the situation had become. At the time, rumors spread of an IDF radar that was neutralized in Sharm e-Sheikh by the Egyptians. And so when we were spread deep in the Sinai, around Ras Sedr on the Gulf of Suez and the Red Sea coast, awaiting orders on the third day of the war, two Egyptian fighter aircraft appeared and began targeting our long procession, including loaded trucks, half-tracks, many soldiers and a great deal of ammunition.We instantly jumped to the side of the road and began digging in the sand, using our hands to deepen the trenches with what felt like superhuman speed.The Egyptian planes completed their first attack and were getting ready for a second pass, while we watched from below. Then, for no apparent reason, one of the planes plummeted into the water and crashed. The second plane suddenly shifted course and flew back to the south.It was only then that we realized the magnitude of the event. It was when the feeling of uncertainty turned into a sense of profound responsibility.Many concerns and worries clouded our thoughts, but also unrivaled determination and unmatched solidarity.The experience of war always changes who you are, your way of thinking and priorities. The Yom Kippur War also fundamentally transformed the army, as well as the government’s policy.This week we also mark Yom Kippur, a time to atone and repent. The Yom Kippur War was, among other things, the result of complacency and arrogance, of both the army and the government.As a former defense minister and current member of the Knesset’s Defense and External Relations Committee, I can attest that the IDF has drawn the necessary lessons, and one can only be impressed by the professional level of its soldiers, their sophistication and creativity.The military failure was widely discussed since then, in scholarly articles, in the media and of course in the Agranat Commission. The government’s failure is less known but equally severe. Prime minister Golda Meir did not take the initiative before the war with the then-new Egyptian president Anwar Sadat. Defense minister and IDF chief of staff Moshe Dayan famously announced that we are better off with Sharm e-Sheikh in Sinai without peace than with peace but without Sharm e-Sheikh. He was wrong. Almost 38 years after the peace agreement signed by prime minister Menachem Begin and president Sadat, there is no doubt that we are better off with peace.Regrettably, the government today is stricken with a similar arrogance, dismissive of diplomatic opportunities and feeling overly confident with regard to the conflict with our neighbors. Only last weekend Education Minister and Bayit Yehudi Party chairman Naftali Bennett spoke of his dream of annexing all of the territory west of the Jordan, thereby outlining the direction in which the government is heading. While daydreaming about Greater Israel, the reality of the daily friction between Israelis and Palestinians took its toll this week: two citizens killed and six wounded in Jerusalem.I do not expect the government to atone or repent after the next terrorist attack. Instead, its role is to apply the lessons of the 1973 war and seize an opportunity to break away from the Palestinians in a land-for-peace settlement that would keep Israel safe as a Jewish and democratic state.The author is a Knesset member and a former defense minister, deputy prime minister and chairman of the Labor Party.