"What could motivate a 19-year-old Palestinian grandson to stab an 80-yearold Jewish grandmother in the back?" 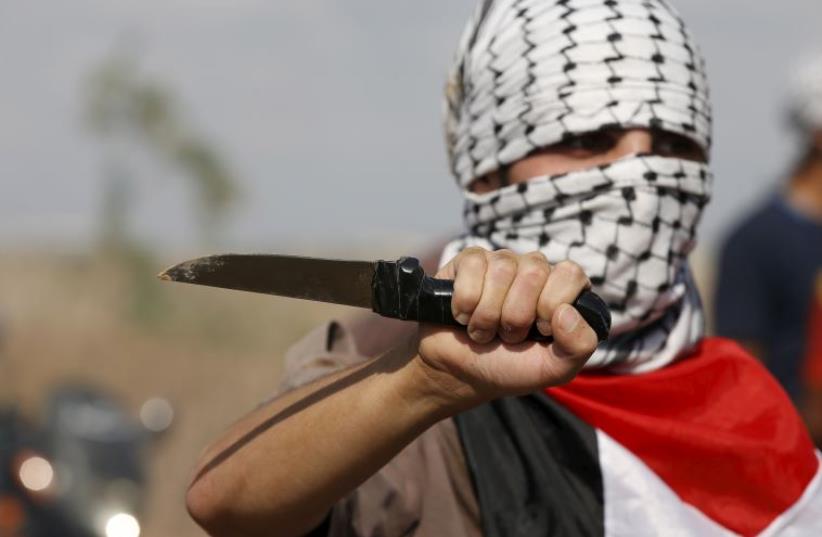 A Palestinian holding a knife in Hebron
(photo credit: REUTERS)
Advertisement
Why are so many Palestinian teenagers waking up in the morning, grabbing a knife from the family kitchen, and attacking Jews – actions that usually result in their own deaths? What could motivate a 19-year-old Palestinian grandson to stab an 80-yearold Jewish grandmother in the back? The teenage terrorists are often described as “lone wolves” because their violence is spontaneous and lacking the organization of previous terrorists, such as suicide bombers. But this categorization fails to acknowledge the broad support that Palestinian society gives them, not to mention the certainty that they will be rewarded for their deeds in heaven and on earth by having a street, or square, or stadium named in honor of their “holy martyrdom.”Daniel Polisar, a political scientist at Jerusalem’s Shalem College, wrote an illuminating essay, “What Do Palestinians Want?” in Mosaic magazine’s November 2 issue.He presents the results of numerous public opinion polls among Palestinians on “what ordinary Palestinians think about Israel, Jews, and terrorist attacks on civilians.”While the focus of most of the current terrorism is the general Palestinian belief that the Jews are endangering al-Aksa Mosque, a close second is that Israel is summarily executing Palestinian children. The first libel is commonly traced to the notorious grand mufti of Jerusalem, Haj Amin al-Husseini, who used it to set off the 1929 massacre of Hebron’s Jews. It has become a recurrent theme of Palestinian violence, the latest instance being its constant reiteration by Palestinian Authority President Mahmoud Abbas.Palestinians do not believe Israel’s denials of seeking to change the status quo and ignore the undeniable evidence of Palestinian attacks on visitors to the Mount using rocks and firebombs stockpiled in al-Aksa itself.The Palestinian Center for Policy and Survey Research, headed by Khalil Shikaki, has been conducting attitudinal surveys among Palestinians for decades. A constant theme he has documented over the years is a worldview that most Israelis would find puzzling. For example, a PSR survey that appeared after the August 2014 cease-fire with Hamas found that fully 79 percent of Palestinians believe Hamas won the war, with only 3% seeing Israel as the victor. The same poll found that 54% applauded the 2014 abduction and murder by Hamas three Israeli yeshiva students.Polisar examined more than 330 surveys carried out by four major independent Palestinian research institutes to determine what Palestinians think of Israel and Jews, Zionism and the value of carrying out terrorist attacks: • With regard to the Gaza wars, a large majority of Palestinians are convinced that Israel deliberately targeted civilians and that Hamas was blameless for positioning its leadership, fighters and weapons in residential areas.• With regard to Israel’s goals, an average of 59% think Israel wants to “extend its borders to cover all the area between the Jordan River and the Mediterranean Sea and to expel its Arab citizens.”• A 51% majority of Palestinians believes Israel will destroy al-Aksa Mosque and the Dome of the Rock shrine and replace them with a synagogue.• “Palestinians characterize Israelis as belligerent and untrustworthy but clever and strong, and finger Judaism as the most violent of all religions.”• The Palestinian Center for Public Opinion asked residents of the West Bank and the Gaza Strip: “Do you think that Jews have some rights to the land along with Palestinians?” Only 12% agreed that “Both Jews and Palestinians have rights to the land,” while more than 80% asserted that “This is Palestinian land and Jews have no rights to it.”• In a 2001 PSR poll 98% of Palestinians said the killing of 29 Palestinians in Hebron by Baruch Goldstein in 1994 was terrorism, but only 15% were willing to say the same for an attack by suicide bombers that killed 21 Israelis at the Dolphinarium discotheque in Tel Aviv in 2001. An average finding of six Pew polls over the past decade is that 59% of Palestinians see suicide bombings as justified.• With regard to the efficacy of violence, a 2005 poll by the PSR found that “Sharon’s plan to evacuate the Israeli settlements from Gaza was a victory for the Palestinian armed resistance against Israel.”Palestinian attitudes toward Israel are formed by a complexity of religious and nationalist beliefs that underlie the motivation for terrorist attacks – but are aroused into violence by incitement. Until the Palestinian leadership recognizes the true self-interest of coexistence with Israel and takes a firm stand against the violence, it will continue.