The low point in relations between Arab Israelis and the police came in October 2000 when clashes left 12 Arab Israelis dead and dozens injured. 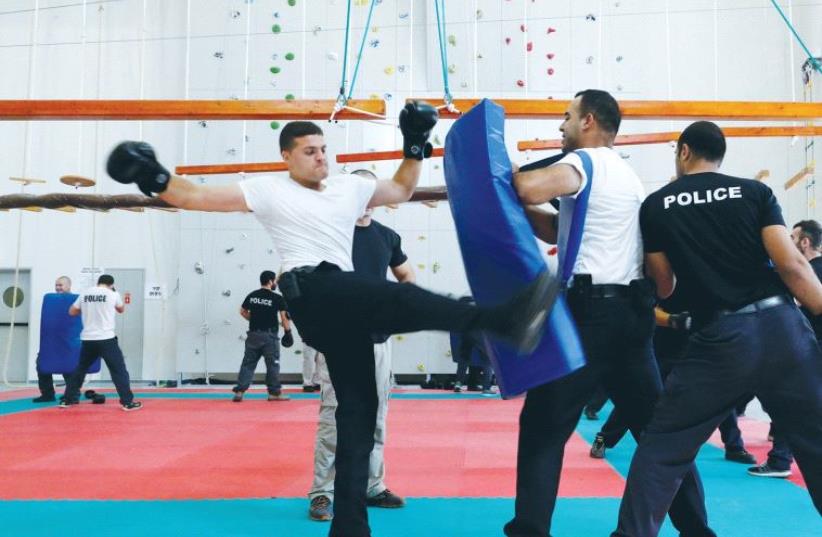 AN ARAB RECRUIT takes part in training at the Israel Police Academy in Beit Shemesh on August 24
(photo credit: REUTERS)
Advertisement
In April, during the swearing-in ceremony of Jamal Hakrush as deputy commissioner of Israel Police, Public Security Minister Gilad Erdan declared his intention to increase recruitment of Israel’s Arabs to the police force. The appointment of Hakrush, an Arab Israeli, to the rank of deputy commissioner was a watershed event.It marked the first time a Muslim-Israeli citizen had reached such a senior level in the force. And Erdan took advantage of the event – covered by most of the major international media outlets – to call on Israel’s Arabs to join its ranks.Perhaps it was Hakrush’s appointment, perhaps it was the campaign Erdan’s office has launched in recent months, perhaps it has to do with other changes in Israeli society, whatever the reason, there has been a sharp rise in the number of Muslim Israelis applying to Israel Police.According to data released this week by the police, so far in 2016 1,420 Arab Israelis applied to the force, compared to 543 for all of last year. If this trend continues, it would mean a significant change in the make up of Israel Police.Still, the data should be treated with caution. When counting the number of Muslims in the force there is a tendency to lump together Beduin, Christian Arabs and Druse – when in reality these three groups are very different from the vast majority of Arab Israelis. The percentage of Muslim Israelis who serve either in Israel Police or Border Police units has not changed much since 1967 – about 10 percent. This is significantly lower than their relative size in the general population which is about 20%.But of this 10%, over half are Druse who serve in the IDF and can easily make the transition to the police force.Another 1.7% of police are Christian Arabs, 1% are Beduin and only 1.3% are Arab Muslims. These Arab Israelis shun the ranks of the police because they want to refrain from coming into conflict with Palestinians in Jerusalem or the West Bank.The police’s interest in Arab officers has to do with the notion that Arab Israelis are uniquely positioned to handle crimes among their own people. They can gain access to places where Jewish policemen would feel uncomfortable entering; they know the language and are familiar with cultural nuances.Another goal Erdan and others would like to achieve is improving relations between Arab citizens and law enforcers. This might be a bit more difficult to do. That’s because Arab Israelis perceive the state and its policies as fundamentally biased and discriminatory toward Arabs.The low point in relations between Arab Israelis and the police came in October 2000 when clashes left 12 Arab Israelis dead and dozens injured.Encounters with Israel Police often tend to be negative and many of Israel’s Arabs are less than enthusiastic about serving a state that defines itself as Jewish. Many believe that in order to advance in rank an Arab police officer must prove his or her loyalty by demonstrating a willingness to place Israeli-Jewish interests before Israeli-Arab ones, which tend to be perceived as perpetually conflicting.Still, according to a survey of Arab-Israeli opinions conducted by Guy Ben Porat and Yuval Fany in 2013 in a number of Arab towns, the majority responded positively to the idea of Arabs serving in Israel Police units.Fifty-nine percent said they thought Arabs should serve in the force while 35% said they shouldn’t.Forty-five percent said they thought recruiting Arabs would improve relations between the police and the Arab population, 26% said it would not and 19.3% said it would exacerbate bad relations. Over half said they preferred police patrols made up of both Arab and Jewish police officers.Another poll conducted by Ronald Weitzer and Badi Hasisi brought the researchers to the conclusion that the symbolic impact of Arab Israelis in uniform could improve perceptions of Israel Police among Arabs and foster a feeling of involvement and influence in the country’s socio-political system.Integrating Israel’s large Arab minority remains one of the most formidable challenges facing the State of Israel.In a country that values service to the state so highly – whether in the form of military or national service – it is imperative that Arab Israelis are given the opportunity to serve and in a way that is in line with their sensibilities and values. Israel Police provides this opportunity.